One rock makes an entire habitat

I came home to a long note on my kitchen table, and my trusty encyclopedia full of purple sticky notes. My granddaughter had come over to water the plants, and had taken the time to mark all (or most, she says) of the "neat stuff" she saw scuba diving off Whytecliff (Horseshoe Bay) on the weekend.


"There are probably hundreds more, but ... lots of stuff is so small I probably didn't even know I was looking at it."

She's right, except that there are probably thousands more. Here's one rock I found on the beach near Stories Creek on Vancouver Island, for proof: 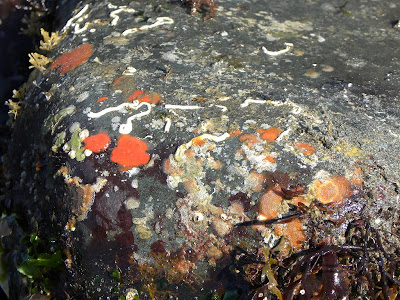 Looks like a painter's drop cloth.
That's too much to see, in one photo. I'll break it down a bit: 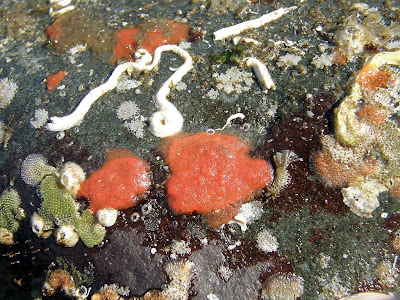 Green. red. white, orange ...
The red patches are some sort of encrusting sponge*. The green is a bryozoan. The white circles are possibly the same bryozoan, except that the green one is tinted with algae. On the right, the orange and cream stuff is a scramble of bryozoans. The curly red ribbon is the tube of a calcareous tubeworm, probably red trumpet, Serpula columbiana. The rock is sprinkled with tiny barnacles, and smeared underneath all with a deep wine-coloured encrustation, possibly encrusting coral.

Another section of the rock: 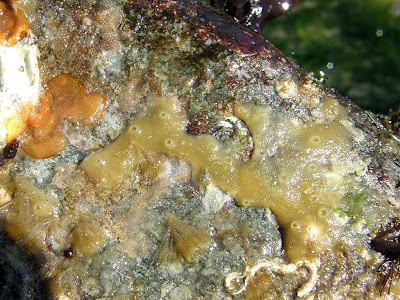 A scrambled mess.
Lots of stuff, but hard to see. The central yellowish stuff is a sponge; the large holes are exit holes (osculae) for the water it filters. The tiny pores are intake holes.

For the rest, let's break the photo up a bit: 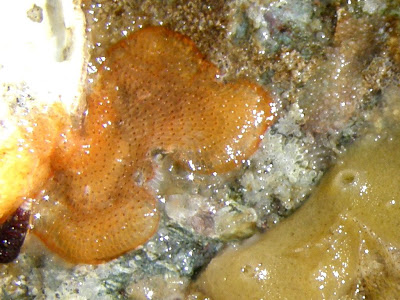 A fan or leaf-shaped bryozoan, in bright orange.  Compare the regular pattern of holes (lophopores) to the randomized arrangement of the sponge next door. 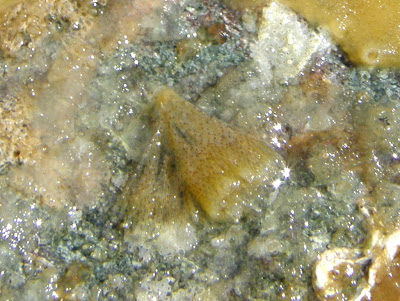 A "feather duster" organism. I don't know what it is, yet.
And further along the rock: 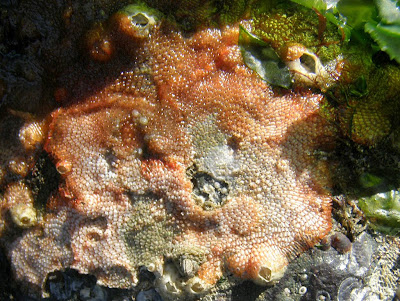 Red/pink/green bryozoan, encrusting the rock, itself, and barnacles. The limpet has escaped. For now. The bright green stuff is sea lettuce, masked by red algae fronds. 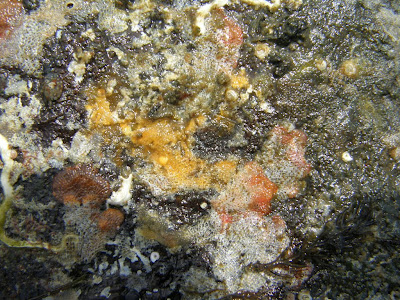 This one's difficult.
Examining this photo carefully, I find a variety of bryozoan colonies, a few barnacles, a limpet with red encrustations on the shell, a couple of calcareous worms, at least half a dozen tiny coiled tubeworms, and a smear of yellow sponge. And I think that white thing towards the left bottom looks suspiciously like a white nudibranch. I wish I'd noticed it at the time I took the photo. 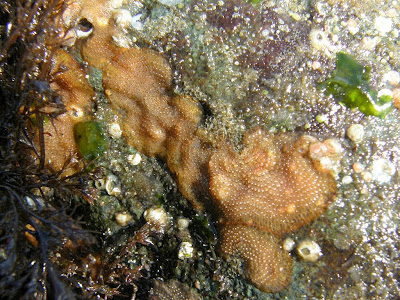 A few nice, neat bryozoan colonies, in a warm brown, on a substrate of assorted purple and bluish encrustations. With barnacles and pink "somethings".
And I wonder what I've missed here. I could have spent an entire afternoon on the beach with this rock and a portable microscope. (Which I forgot to pack; I won't next year. I promise.)


"Sponge classification and recognition is a most problematic and frustrating subject for a naturalist. Indeed, academic professionals who spend their careers studying the group are likewise challenged -- a fact that leads to much uncertainty in scientifically oriented sponge publications."