... at least for half of the happy couple.

Part of a continuing series on the life and times of an Achearanea tepidariorum (American house spider) family. Parts I - Spider Watching, II - Fresh laid eggs!, III - Taking Candy from a Baby, IV - We Haz Babies!, and V - Baby Pictures. 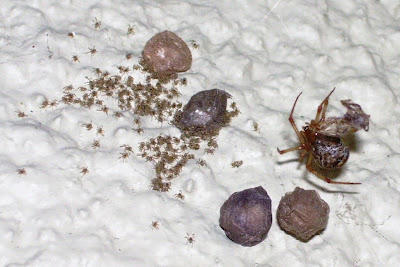 Ever since I first saw a timid male hanging around the edge of Fat Momma's web, I have been trying to catch them in the act of mating. No luck yet, but this is as close as I've come.

After the first egg case was laid, the male had disappeared. Whether she ate him or he was off gallivanting, I couldn't tell.

I kept my eye on her, all through the guarding of that egg case, and eventually another male (or the same one) showed up on the wall near her web. He stayed for a few days and disappeared, coincidentally at the same time that she produced another egg case. (And the same day that the first batch hatched.)

In the month since, a third male appeared, hung around a day or two, and was gone. And Fat Momma had a third egg case, the first still hanging there although it was empty.

I have been busy this last week, and didn't monitor her as closely as I could have. I hadn't seen the fourth male, nor was I aware of the hatching of the next round of spiderlings until three days ago; by then, they were probably about 2 days old.

And Fat Momma has a fourth egg case. And the male was still around. She was busy eating him. (Photo above.)

That question answered. She eats her mates.

(I wanted to confirm that it was her latest mate, and not a random visitor of another species, so I waited until she had finished with him, and fished him out of her web. A long wooden back-scratcher was handy for this job. I looked at the tangled, glued-together mess under my little microscope; yes, it was a small Achearanea. Her poor mate, who had sacrificed his all for love.) (And I have a photo, but I'm sure you don't want to see it. It ain't pretty.)

Laurie wonders how that works out; the successful suitor passes on his genes only once. Worse, I think, is that he has provided food for the female after the fact, after the eggs are laid. So he is getting her in shape for the next batch; the eggs fertilized by his successor. Seems counter-productive to me.

Any thoughts on that, anyone?

What has changed? The weather. It is definitely colder these nights, cool in the daytime. And FM's web is in a sheltered corner; Chica's is around the outside corner, exposed to the wind.

Are the incubation periods dependent on the temperature? It looks like I'll have to watch right into next summer to find out.

One more thing; Wren had wanted to see baby spiders, and I couldn't get a decent photo. A few days later, one showed up on my doorpost, so tiny that I don't know how it was that I noticed it, just a black dust speck that caught the light and seemed to have legs. I was in a rush, and only stopped to take one photo. When I came back later, though I searched with a lens up and down the door, I couldn't find any spiderlings at all.

So here is a fuzzy baby pic. 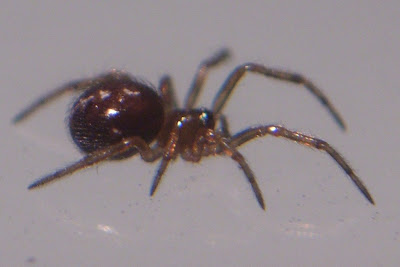 Now to see if I can catch another baby of this latest batch.