It happens every time; we start out to visit Reifel Island Bird Sanctuary, then dawdle on the way, stopping at every eagle tree and bit of swamp. We slow to a crawl for herons in ditches, snow geese 'way across the fields, hawks in pursuit of a meal.

Eventually, we get there.

We were greeted at the gate by the customary mallard free-loaders; this time, several yellow-headed wigeons were with them. 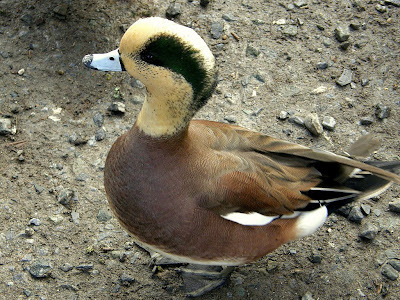 There were several with bright yellow heads and faces (not canary yellow, a bit muted, more like sunlight on old gold); others had a variety of shades, from pale butter up to lemon pie filling yellows. The heads were thin, flattened like a fish head; they bulged to a possible crest at the back. We had never seen any like this before. They don't match the American wigeon, nor the Eurasian (a dark brown head); the winter plumage of the American may be pale, but not yellow. I did find one photo with a golden head, but in full summer colour, and with a nicely rounded head. 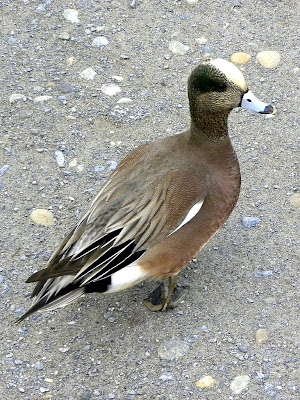 This is what we expect in a winter wigeon.

We spent more time with the mallards than we usually do, trying to get at least one decent, unblurry, unobstructed photo of a yellow-head. Not a simple feat, in that mad scramble for handouts! When a toddler arrived to feed the ducks, father and bag of bird seed in tow, we moved on. We'll try another day.

Along the paths, we met fewer wigeons, more mallards. They came running or swimming (making great Vs in the water) if I so much as rustled the paper of the seed bag. 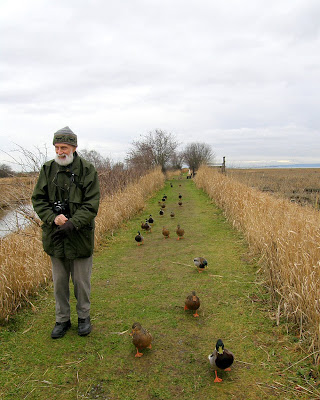 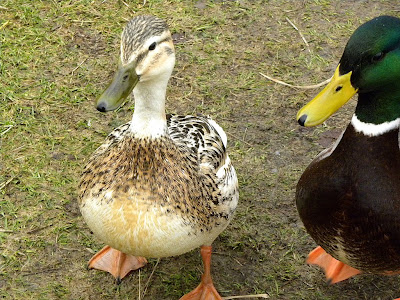 Mallard pair. She is a very pale variant. Hybrid, maybe? 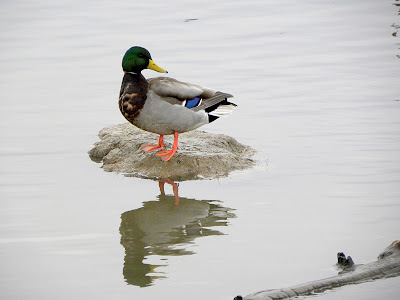 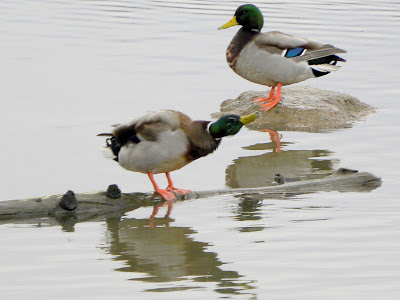 Joined by another "normal" male. With a spinning head and a brown neck scarf. What is he doing?

In one of the pools, this duck was paddling alone. 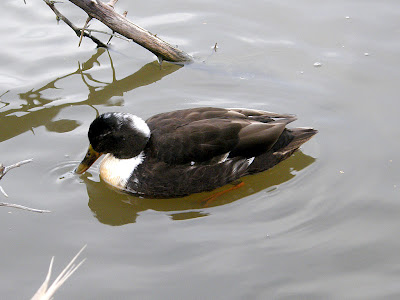 I can't find this one in the books. White bib, dark brown body and wings, a puff of white at the back of the head, yellow mottled beak, and a white streak behind the eye. No blue speculum, but the white edging that usually borders the blue is still there*.

It's probably another of the many mallard hybrids and "Manky Mallards". (Pure mallard, but weird; crested mallards? Mallards with 1950s schoolteacherish buns? A purple-headed mallard? Really, really purple? That's weird.) I've checked those out, too; Charlie at 10,000 Birds has a good selection, with explanations. Here's one that's similar to ours; a "Manky", "Swedish-type" mallard.

What do you think?

*I thought the absence of a blue speculum meant that it couldn't be a mallard, but it seems that mallards obey no rules.

Posted by Susannah Anderson at 2:29 am