Confession (Circus of the Spineless # 43)

I may as well face the truth. Just speak up and admit it; I'm addicted. Addicted to the squirmy, crawly, squishy, tentacled, shelled, chitined, variously-limbed, multi-hued majority of animals on this space pebble of ours. The spineless, in other words. 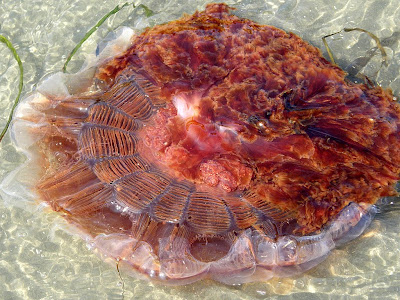 Lion's Mane jellyfish, in all its glorious, squishy colour.
Let me amend that; we're addicted. I have plenty of company, and a merry company it is.
And we must have our daily fix. We will go to any lengths to get it, too. Witness Doug, skulking around Magic Gas Stations in the dark. "Just getting gas," he says. We know better.
Some of us find it easy, even socially acceptable. Dave looks for wasps in his mother-in-law's garden. John photographs wasp mimics in his. The Ontario Wanderer takes advantage of the cool weather that slows down a bumblebee. 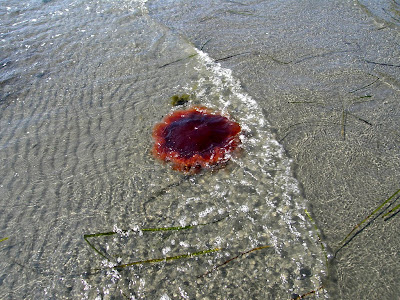 Lion's Mane, washing ashore. White Rock beach.
But that was yesterday's fix. Today, we need something new, something a bit harder to find. You may see a man tiptoeing slowly through the eelgrass bed, bent almost double; it's probably Dave again. Hear his triumphant cry at last, "Proliferating anemone!"
When our supply fails, we take measures into our own hands. I collect seaweeds, with their cargo of live critters, and settle them into my home aquarium, where I can indulge at my leisure. Elizabeth grows her own, Raising Monarchs in her kitchen. 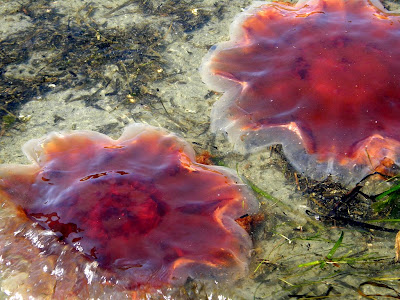 For some, the addiction drives us to extremes. Ted and friends, intent on finding all 24 species of Missourian tiger beetles, sit with sheets and blacklights on a river bank at night, undeterred by swarms of aquatic insects flying down their shirts and getting in their hair. The pizza and Merlot helped, probably.
I would have been happy to join that crew, but here's the limit of my addiction; I don't think I'd lie on my belly in the muck, like Bobbie, to photograph a polychaete. Maybe not. Unless ... Her photos are amazing! I've changed my mind; mud flats, here I come! 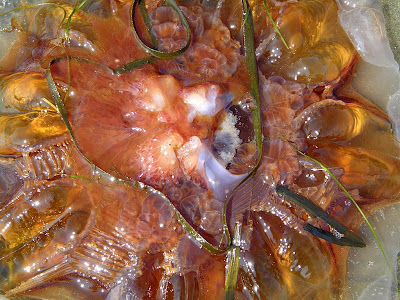 Shapes and colours in a Lion's Mane jellyfish
Zen, more sedately, almost contemplatively, finds his spineless wonders at arms' length, in research journals. Do male moths prefer male flowers? If a crab waves at you, what does it mean? (Depends where he comes from, it seems.) Whatever it means, Zen thinks it looks cute.

I’d never heard of this species before this paper (not surprising, because they are an Asian species), but now I’d like to see them.

Careful, Zen; next thing you know, you'll be down in the mud with the rest of us.
This is no laughing matter. Do your friends and family shudder when you start to describe your latest discovery? Do their eyes glaze over? Does your favourite in-law take you aside during a family party to show you ... a spider in the bushes? Do you keep apple pieces around to lure fruit flies? Do you spend entire evenings Googling corals? This is serious ...
(Sorry; I got distracted. A green plant bug just showed up on my desk. He's gone now. So, where was I?)
The important question, I guess, is whether we can break this addiction. (Or do we even want to?) Let's look at some historical examples ...
Did you know good Doctor Freud started his career studying crayfish? And then, astoundingly, abandoned them for medical practice. However,

... Freud found that research didn’t pay enough for him to get married...

Since when was money a deciding factor? He must not have been a True Addict.
Try another one: Charles Darwin and his barnacles. He got involved with them in his 20s, went on to other things, rediscovered them while on the Beagle, put them aside until 1846, then spent 8 years in his study with them, watching, observing day and night, until his eyes burned with the poor light. The four books he wrote on them totalled a thousand pages. 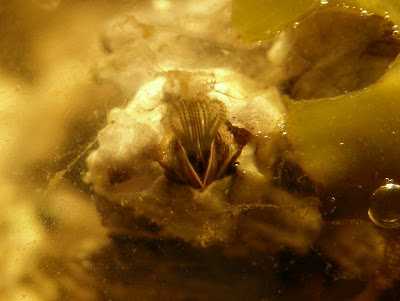 Barnacle, combing the water for goodies.
That's obsession on a grand scale! I don't think we have to worry about a bit of lying around in the mud or a few bug bites.
I'm glad that's settled, because I found a few recent photos that you'll want to see:
Note: some of these fellow addicts sent me their links. For the rest, I followed Matthew's example; he tracked down our posts himself to put together The Moth and Me #5. Thanks, Matt.
The next Circus of the Spineless will be hosted by the team at Quiche Moraine. Get your submissions to them before the end of September.
.
Posted by Susannah Anderson at 4:05 pm