Happier than Kings; Circus of the Spineless #57

"The world is so full of a number of things,
I'm sure we should all be as happy as kings."

I just skimmed through R. L. Stevenson's "A Child's Garden of Verses". His number of things is limited to a mere 3% of the life around him; not once does he mention anything without a spine.
How deprived he was! And how much happier we must be, we who know and love the creepy-crawlies, the squishy-slimies, the fliers and jumpers and swimmers; the other 97%! The imagination staggers at the inventiveness of Ol' Ma Nature; whatever strange body plan or life cycle or survival mechanism you can think of, she's already been there, and done you one better. There's no room for boredom in the kingdom of the spineless.
Let's start this edition of the Circus with the basics:  life began in the sea. So Lucy, at Loose and Leafy, in Floating in History, ponders on us, the 'shrooms, algae, and our closest living invertebrate relative, the sea squirt.
Joan, at Anybody Seen my Focus? tracks Mussels on the Move. And times one, too; a snail would be stiff competition. This was something new for me. Freshwater mussels don't look like the saltwater ones I am familiar with.
Rebecca In the Woods posts Moon Snail Mayhem. "So much drama," she says.
Ohhh! A polychaete! It Came from the Reef Tank: Bristleworm, by Michael, blogging at Southern Fried Science. With a video of this very pretty worm. (I may be a wee bit biased.)
And Olivia, at Beasts in a Populous City, (Washington, DC) reminds us of beasts "weirder and wilder than anything imagined in science fiction." Creepy Crawlies.
Moving on, to dry land. Sort of. Did you know that there are moths that live underwater? Dave, of Dave Hubble's Ecology Spot, describes Britain's Aquatic Moths.

"In at least one species, the adult female moth is completely aquatic and never emerges from the water."

Ok, this one really is on dry land. The Geek in Question (at Fall to Climb)  is so brave: watch the "Biggest Spider in Ever" walk up a trembling arm.

"I did what any self-respecting entomologist would do: I wrung my hands and hopped from one foot to the other, doing the Holy-Heebie-Jeebies-Icky-Icky-Spider Dance."

Bravery is voluntarily transferring that spider to one's arm after the dance is over. 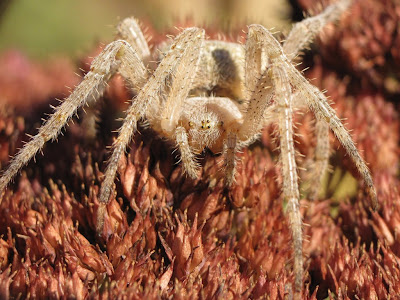 I discovered another goodie on TGIQ's blog: a video of an enslaved caterpillar doing the bidding of his masters; Caterpillar Kung-fu. Don't miss the comments; there's a link to a follow-up video, a horror sci-fi-like one. (We all love those, don't we?) Nature beats art, any day.
From Chris, the Dragonfly Woman, Webspinners. I never knew such insects existed. Crushable wings? What next?


"They can fold, bend, curve, and otherwise move their wings in ways that are impossible in most other insects."

These wings are soft, too. For a minute or two. At Medlar Comfits, amazing Cicada closeups; be sure to follow Anna's link to her photo on National Geographic.

A Day in the Life of a Red Ant Guard; a poem by Anna describes an encounter with the tunnel defenders.

Ted, at Beetles in the Bush gives us a detailed account of the prairie tiger beetle, Cicindela obsoleta vulpurina. He has been conducting a "... love affair with this species," and it shows in his beautiful photos.

From India, at Trees, Plants & More, Arati shows us some Fire Ants.  Interesting tip; How to fold up a big leaf, many times your length.

Jill, at Count Your Chicken! We're Taking Over! has another spider, a real cutie: No Mercy. A jumper, with marvelous electric blue-green fangs.

At Carp without Cars, John is Obsessing about Coyote Brush. This particular brush is host to several species of parasitic wasps. And a bubbling fly. Follow his link to BugGuide and scroll 'way, 'way down to an explanation. Bubble, bubble.

Matthew, blogging at Backyard and Beyond, explored his backyard to find "All Creatures Great and Small."  Well, "mostly small", he says. "And mostly slimy."

... it will feature a weekly roundup of all the cephalopod-related news that's made its way across my aggregator in the previous seven days. I will be posting these on Friday to make the end of the work week as tentacular as possible.

The first one is here, and future updates will show up here.
Olivia presented us with a hermit crab, but here are a couple more, for good measure.
And just this evening I discovered another few insects that I simply must pass on. The Surreal Treehoppers, on Why Evolution is True.

The last one, for added weirdness, is a scrambled wasp mimic.
Not even Dali can beat Ma Nature.
~~~~~~~~~~~~~~~
The January CotS (#58) will be hosted by Cephalove. Check the Circus of the Spineless site for addresses and the submission deadline.
Posted by Susannah Anderson at 2:15 am