Company on the road

I'm home. I drove down Friday and Saturday, through fire, smoke, lightning, long waits for fire-fighters' go-aheads, road work and rain, with a cramped, damp night's sleep and a warming (heart-warming, too!) cup of coffee with E. of Cicero Sings, and feisty Mingus Saturday morning. I knew I was almost here when I hit a traffic stoppage at 200th Street, with 40 more blocks to go before my off ramp. After an average (I counted and did the math) of one vehicle every 4 minutes on the Bella Coola highway, it made quite a contrast.

I came home, said hello to Laurie, started to unpack, dropped it all and went to bed. I don't think I've been that tired for years. A good tired, though. A challenge taken; can I still drive that road alone, after all these years away? And won through; yes, I can.

It was a good trip, a great visit down in the Valley. I'll have photos and stories as soon as I get them all sorted. For now, here are a few critters I met at various places along the road. 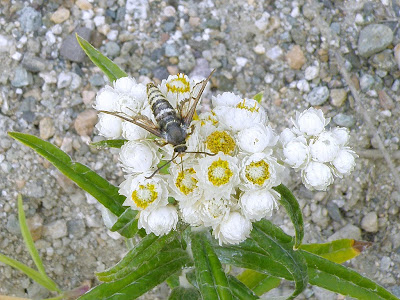 Lacy-winged wasp? On the Coquihalla highway. 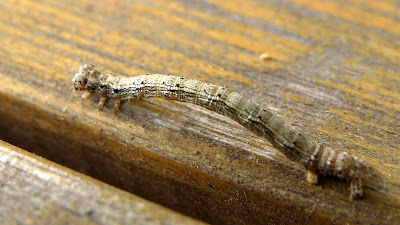 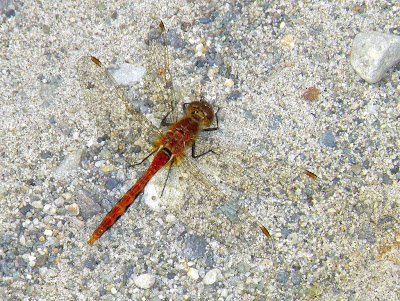 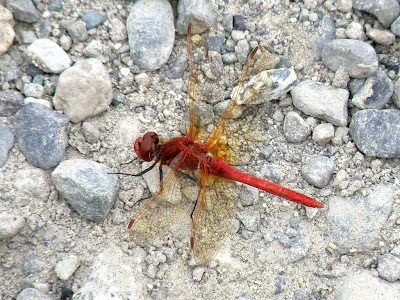 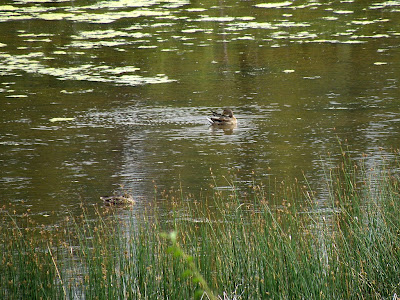 Brown ducks. One of the many shallow lakes or ponds between Tatla Lake and Alexis Creek. 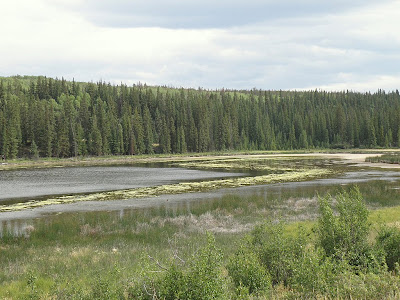 The lake. The ducks are those brown spots just in front of the floating vegetation.
The insects seem to be very calm or even tame, along here. Most of the difficulty of photographing them was finding them on a plant that the wind wasn't whipping about. The inchworm wandered around our table, not at all worried about our glasses and map books. When I put down the camera, he climbed on it and went exploring. Only the dragonflies and grasshoppers flew away when my shadow fell on them.

The ducks were definitely not comfortable with humans, maybe because many of the local humans are hunters for the pot. They were close to the shore until I stopped the car. By the time I had stepped out, they were speeding out to the centre of the lake.

Range cattle, on the other hand ... 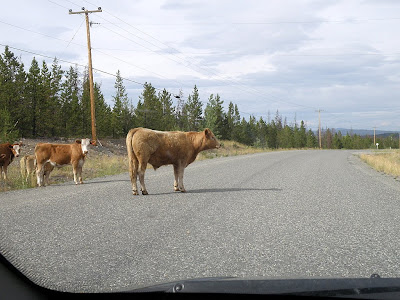 ... like to stand in the road to get a good look at you before you inch past. I always slow down, because there's no telling when they'll decide to claim ownership of the pavement.

Every so often, there are cattleguards; grids of a dozen or so metal bars across the road, with gaps too wide for the small feet of a cow. With the fences, they are supposed to keep the herds in their home territory.

The cattle may be too smart for them. My son-in-law saw a herd come to a guard. One by one, they stopped at the edge, examined the grid for a minute, then hopped across. I never saw a cow hop before; very funny, that big bulk making a dainty "hop!" up, and over, coming down as neat as a ballerina. They all made it, even the calves. He has video; if he loads it to YouTube, I'll post a link.

My daughter and I saw two bear cubs in a pair of apple trees; they got away before I had the camera ready. I saw a stag with a large rack, far away in a field, many cute chipmunks crossing the road and something large and brown, but too small for a bear, slinking away into the bushes. I found moose droppings ... 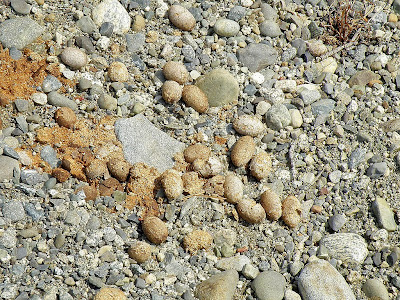 And I'd never seen a herd of range horses on the road before. There were a dozen standing in the centre, in a circle, heads in, butts out, like footballers in a huddle. Three stood on the side, waiting. 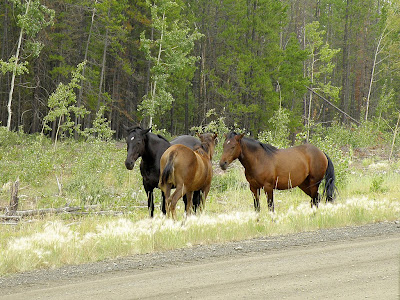 One is branded N/C, another AI.
On the way home, I found a dying moth in a campsite washroom: 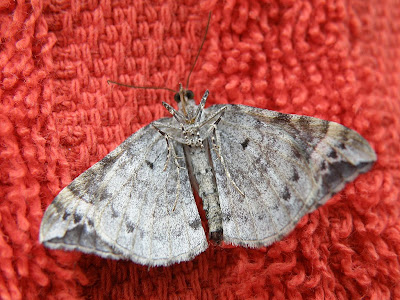 Resting on my towel. Near 111 Mile House. 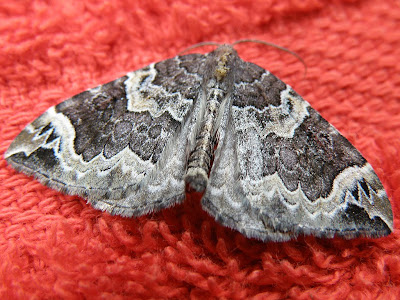 I went looking for bears, and didn't find any. That's another story, for another day.

I'm off to bed. Tomorrow, if it isn't raining, we're back to our usual haunts.
Posted by Susannah Anderson at 3:17 am