Hermit Rex gets his portrait done

Hermit Rex has been challenging me through the glass of the aquarium. He sees me passing by, and rushes to the front, waving his big claw; "Look at me! Aren't I gorgeous?" I bring out the camera and he sits happily for his portrait.

But the photos rarely turn out; there's always a bit of seaweed in the way, the inside of the glass usually has a coating of algae, a limpet or snail slides across while I adjust the lighting. Hopeless. I needed a better system.

I may have found it; a small plastic jar with flat, clear sides, not too badly scratched, wide enough for Rex*, and even for Boy Blue**, who still insists on wearing a shell two sizes too big. It's deep enough to add stones to make it feel more "homey". With a divider made of a pane of glass, I can shrink it to size for the crabs. Maybe I can even get one of the big worms to show off her shimmery coat. And between uses, it can be cleaned thoroughly; no algae, no limpets!

I started out tonight with the hermits. 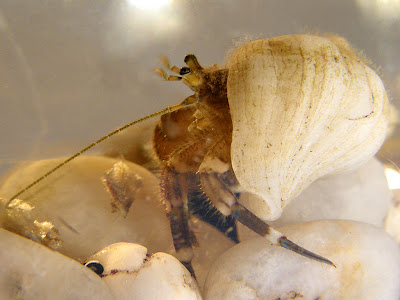 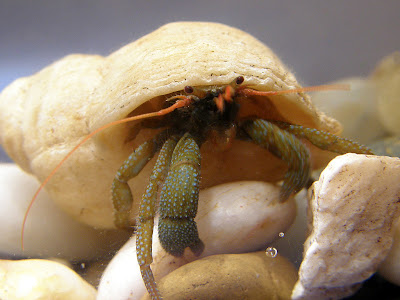 Boy Blue, showing off his red antennae and polka-dotted claws.

I'm pleased with this first practice sitting. I'll have to make a few adjustments; figure out how to eliminate the reflected light, maybe replace the stones with clean sand as a backdrop for my tiny crabs.

Rex, true to his outgoing personality, seemed to enjoy his outing, exploring the rocks, then watching me and the camera, antennae waving enthusiastically. Boy Blue paced like a caged tiger; I cut short his sitting before he got too frantic.

I've noticed, in the tank, that all the smaller hermits, the same species as Rex*, are confident, even aggressive. They steal goodies from the larger crabs, from poor Boy Blue, from each other. I've seen a couple face off with Rex, four or five times their size.

Boy Blue is timid. He waits his turn. He'd rather go without than fight. I wonder if that is a characteristic of the species**, or is it that he's the odd man out, the bottom of the pecking order? I'll have to find him a companion; see if that helps.

*Rex is probably a hairy hermit, Pagurus hirsutiusculus. Out of his shell, he's hairy all over, and the colours are right; banded legs, green banded antennae.


"An active species that prefers a tiny and easily abandoned shell, ..." (Marine Life)


"It prefers a large shell that seems almost too bulky to manage."


And that's Blue, down pat.
Posted by Susannah Anderson at 3:13 am