(Edgewater beach series, cont...)
Down near the water's edge, where the rocks never dry out, even on hot days like these, the beach takes on a different character. Here, a little bay forms, shielded by an outcropping of rocks on the north ... 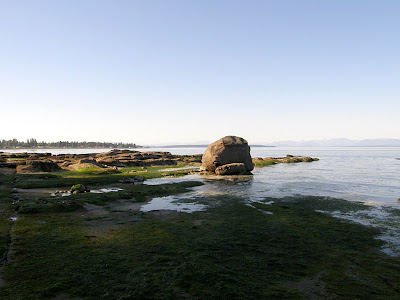 Layers of sandstone and a big rock fallen, long ago, off the cliff side. And a "lawn" of fine algae, a slippery coating of green scum on the rock.
... and to the south, a herd of sea lions turned to stone. Medusa lives! 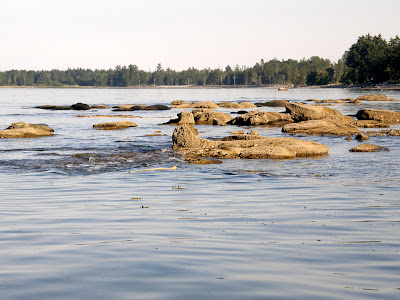 In the bay, a jumble of large, irregular rocks forms the base for a garden of seaweeds. 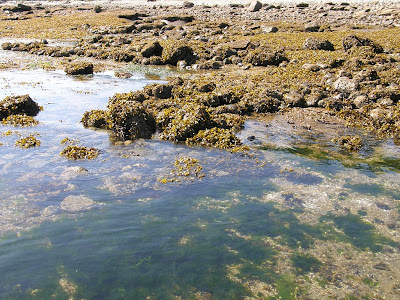 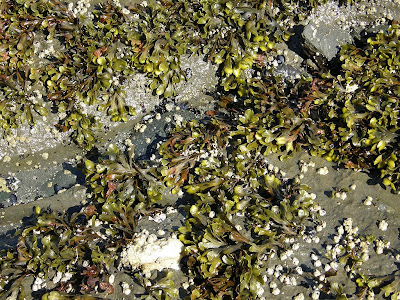 Rockweed, barnacles and an oyster.
No monoculture in this sea garden; every few steps brought a new seaweed. Some were old favourites, like the Turkish towel; others I couldn't identify. Still can't, even back home with my handy "Marine Life of the Pacific Northwest". There is a tiny, reddish-black, hairy plant that covers the bottom of the shallow pools, fine hairs tangled around the base of rockweed, a red "tar" on rocks. Some of the rockweed has enlarged, distorted, blistered branches; whether this is sunburn or an infestation of some kind, I don't know. 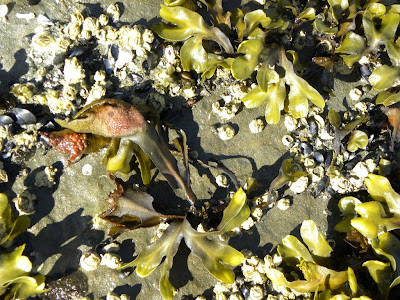 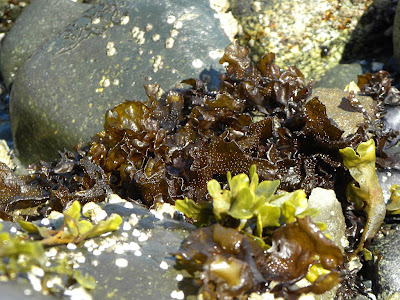 A small Turkish towel, and rockweed. The rockweed seems to be smaller than our Lower Mainland variety. 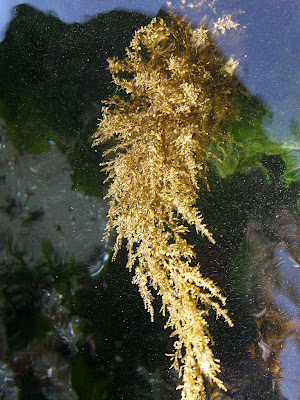 A feathery, yellowish frond floating in the shade of a boulder. 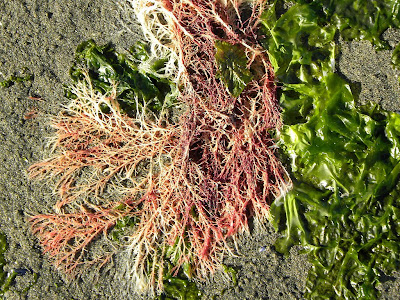 Red algae. The white part has been sunburnt. The shaded bottom is a deep burgundy. With sea lettuce.
And bull kelp. I am always intrigued by these giant plants, so soft and elastic, so alluringly coloured. A smallish one was floating close to shore; I waded out and dragged it in. 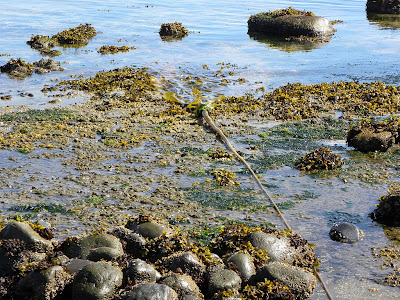 I stretched it across the beach, to see how far it reached. See that yellowish spot 'way at the top of the photo? That's the holdfast. The fronds still reach a couple of metres behind me into the water. 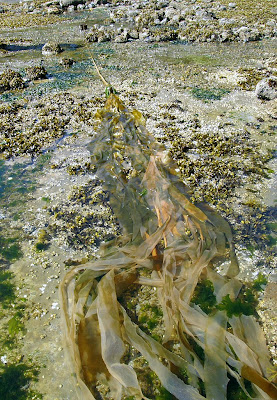 I love the holdfasts; fist-sized grabbers, as tough as wire. They feel and look like molded plastic; they don't bend easily, and I can't break them with my hands. 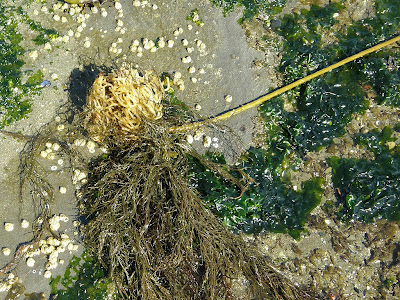 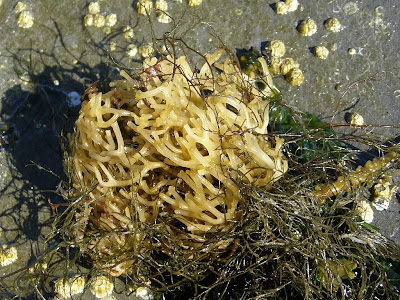 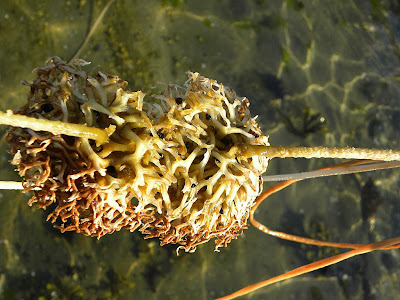 Two holdfasts, intertwined. We pulled at these, Laurie and I; we couldn't separate them.
We've seen these little "blobs" (we have no better name for them)* at Boundary Bay. There were large patches on this beach. They are up to about two inches across, shiny, have no stems. A few were broken, showing an empty centre space. Some were floating in the water.
There are a few similar seaweeds in the Encyclopedia, but nothing quite matches. 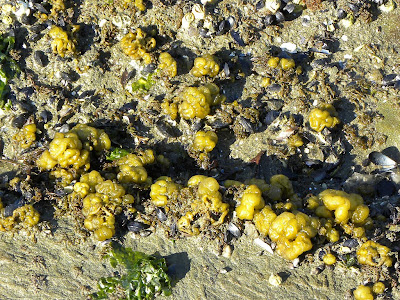 Mystery blobs.
*Update: tentatively identified as Leathesia difformis, the sea potato or sea cauliflower. (See comments.)
One other thing; stand still and look at any patch of seaweed. It's moving. Not the underwater plants, which move with the water; the ones out in the air, too. They vibrate, jerk, bend. Look closely; they're alive with tiny animals. Snails, isopods, crabs (some so tiny we don't see them until we enlarge a photograph), hermits, worms; all in busy motion.
The jumble of rocks peters out; the ones remaining become islands in a shallow basin with a flat, sandy bottom. The water is cool and transparent. We wade out to see those rocks the seagulls were sitting on.
But I'll leave that for tomorow.
.

Posted by Susannah Anderson at 1:25 am