Spring! Finally! The sun shines, the birds are looking for construction materials, and the insects have appeared. About time.

On a sunny wall, last Saturday, a few dozen dark "grains of rice" were hanging. Close up, they turned out to be coated with sand. 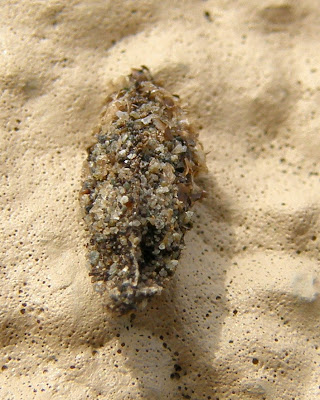 A few were moving; they had some sort of larva poking out of the upper end. 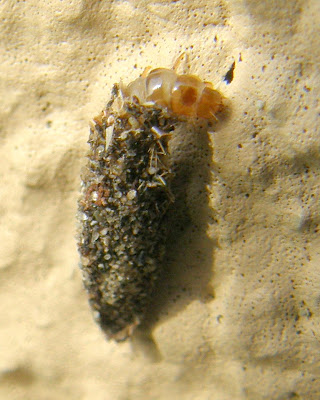 I touched one, and it came off in my hand, so I dropped it in a plastic bag and brought it home. 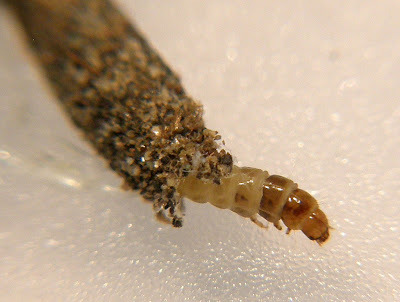 Left alone in a tin, it crawled out of the case, and began moving around, dragging the case behind itself. 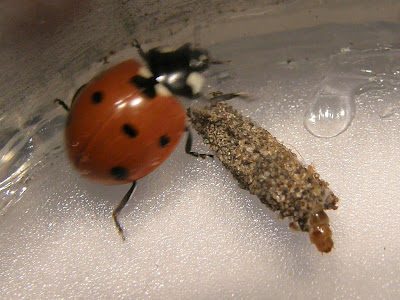 With a ladybug, for size comparison. It is about 8 mm. long.
I propped the viewing tin up on its side, to give the larva a wall to climb on. It went up to the top, over to the middle of the top, and dropped on a long silk to the bottom. Then it climbed up the silk, stretching out of the case, grabbing the silk, pulling the case up after itself until only the head was exposed, stretching out again ... 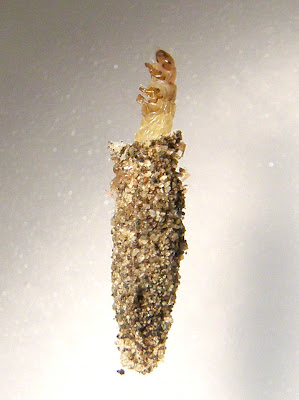 Later, it attached itself firmly to the top, and went into hiding. It is still inside, three days later.

What is it? I had no idea. What makes a case out of sand, besides the aquatic caddisflies?

A bagworm, Dahlica triquetrella. Which is a moth. A moth with no wings, eyes, or mouth. A female moth, in a population without males, at least while they're in Canada.

It gets weirder still.

The adult moth, in Canada, is parthenogenic; always a female, but needing no fertilization by a male. All the offspring are female. In Europe, where they originated, some are parthenogenic, but others do produce males, and reproduce sexually.

The parent produces her eggs, and then either lays them in the case, or dies there with them still inside her body. Laid or unlaid, they hatch. They even hatch if the case has been eaten by a bird; the eggs pass unharmed through the bird's digestive tract.

The newborn larva leaves the parent's case, and builds her own; a silk bag pasted over with grains of sand. The bag has three sides, a hole at the top for eating and moving about, and a hole at the bottom for waste discharge. Where there are males, in Europe, the mature male moth leaves through this bottom exit.

The larva wanders around, dragging the bag behind her, eating lichen, until the fall, when she attaches herself to a handy tree or wall to wait out the winter. She is still a larva; she will not pupate until the spring.

When the spring thaw comes, she pupates. This would be the stage where my specimen is now. I could not find out how long it lasts, but soon enough, the adult emerges. If "emergence" is the right word; the adult moth stays inside the case.

Not that we would recognize her as a moth, if we found her outside the case. She has only vestigial wings, if any. She is eyeless and has no mouthparts; she doesn't eat. She looks more like a worm than anything else.

She lives inside her case for a few days, lays (or doesn't lay) her eggs, and dies. If she leaves the case at all, it is only to lay her eggs back inside the case (through the sides, not the top or bottom hole), die and drop to the ground.

In this area, there are two species; this one, Dahlica triquetrella, and another, Dahlica lichenella, so far seen only near the Alex Fraser bridge. The only photos I have found of this latter one are distinguished by its choice of lichen as a covering material.

Seabrooke, over on the far side of Canada, has photos of a couple of species of bagworm; this one covers its case with sticks, and this one, the snailcase bagworm, uses sand, like the D. triquetrella. The Backyard Arthropod Project has a snailcase bagworm empty bag, and details of its lifecycle; slightly different than triquetrella, as far as diet and timing goes, but still parthenogenic and confined to her bag.

This kind of lifecycle leaves me full of questions. If the female never leaves her bag to interact even with other females, and each of her offspring is basically a clone of the mother, how does the species survive as a species? Would they not gradually change in different ways until each one is almost a species to itself? How did they survive when they first arrived in Canada (first sighting, 1941), if they were "used to" reproducing sexually back home in Europe?

And: how did anyone realize that they were moths?

.
Posted by Susannah Anderson at 2:44 am