My family blends a variety of traditions, from around the world. So our get-togethers are rather unpredictable. Since I was giving my son tips on cooking the meal (he's the chef in his house), I also promised you recipes from this year's Christmas menu: Mexican.

First, the menu.
*There will be plain turkey on the table for the two or three whose digestion can't handle the mole sauce.

Next, a recipe or two: Mole Poblano, old style, and my style.

Mole is a traditional Mexican dish, served primarily at Christmas, Day of the Dead, weddings and other celebrations. The name, "Mole", is derived from the word "moler", to grind, and refers to the chiles, peanuts, chocolate and other spices that are ground together into a fine paste. Different regions of the country have their own interpretation of it, giving us green mole, red mole, Oaxacan black mole, etc. But the one my family is most familiar with is the version from the central state of Puebla, "Mole Poblano".

The dish probably derives from Aztec times, when chocolate was not restricted to dessert and sweets, but other legends have been passed along purporting to give its origin. (See below.)

The recipe for Mole Poblano:
(More or less as the older members of the family would make it. My tips in red, short-cuts in blue. A super-fast version at the end.)

Cook the turkey. (May be done earlier. Or use leftover baked turkey, simmered briefly in a good broth. Keep the broth; you will be using it.) 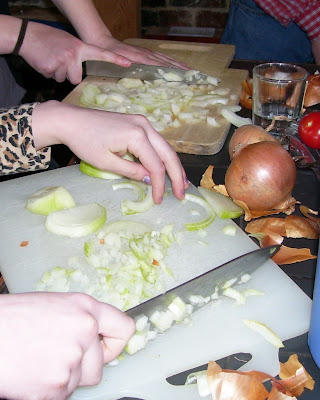 Many hands / light work.
Super-fast version; don't tell anyone if you did this. Buy Mole Paste. It comes in 8-oz jars or glasses. Get the chocolaty-brown kind. Liquify it by stirring in, bit by bit, your turkey broth, over low heat. Keep adding broth and paste alternately until you get as much as you want. (For a few people, a couple of tablespoons of paste is enough.) Add a teaspoon or so of cocoa powder, the same amount of sugar, and a couple of tablespoons of creamy peanut butter. Adjust liquid, simmer for a bit more. Add your turkey, heat through. You're done! Pretend you slaved all day over the stove.

Way back, in the 17th century, in a monastery in the colonial city, Puebla de Los Angeles (City of the Angels), young brother Pascual worked in the kitchen. Being the youngest, he was assigned the lowliest duties, washing and chopping and fetching. And they kept him hopping!

Not that he minded; he was a cheerful, bouncy boy, and hopping was to his taste. So much so that they called him El Bailón, the Dancer.

One day the whole monastery was in an uproar; the Archbishop was coming to the city and would be visiting the monastery. The brothers were cleaning and polishing, airing rooms and practicing their music. In the kitchen, all hands were busy, peeling, chopping, grinding, tasting, stuffing, frying. Pascual was appointed the task of seeing to the wide cazuela, as wide as his arm was long, where a couple of whole turkeys simmered in a delicately-flavoured broth. His job was to fan the charcoal flames under the pot and occasionally to give the broth a stir. He felt deeply honoured by this; elated, too. He sang as he worked, and danced with the rhythm of his fanning.

Alas! He was too excited; in one of his triumphant waves of the long wooden spoon over the pot, he hit a rickety shelf on the wall above the stove. It tipped and shook.

And all the spices, the ground chiles, the chocolate for the archbishop's evening drink, the chopped nuts and seeds, the stale bread cubes and the sugar pilones that were kept on that shelf, slipped, slid, and tumbled into the pot. Disaster!

He did his best to fish the biggest pieces out, but the pot was so big, so wide, the broth so hot, the turkeys so much in the way, that all he could find were bits of chile stem and a few nuts. When the head cook looked his way, he was lost. He was banned from the kitchen, sent to scrub tiles in the back patio while the cooks tried to rescue the meat.

Impossible. The archbishop was at the gates. They did the next best thing, strained the new sauce and presented it with a flourish and desperate hopes.

And the archbishop was enchanted; he pronounced this "mole" the best dish he had ever tasted!

So Pascual, all these years hence, is now called upon by every Mexican cook, as she starts her grinding and toasting for the Christmas meal; "San Pascual Bailón, guide my hands!"

And now, I've made myself hungry; I'm off to get a spicy snack.
Posted by Susannah Anderson at 7:00 pm