For quite a few years, we lived across the Fraser River, in the Burnaby/New Westminster area. We formed the habit, first separately and then together, of going down the hill to the Burnaby Fraser Foreshore Park, and following the trail along the riverbank.

In those early days, the space between the river and the main road was taken up by old farms, "weed" trees, and swampy mixed bush. There was a small "improved" area at the foot of Byrne Road, with lawn grass and picnic benches; for the rest, the main attraction was the river itself, the old cottonwoods and their bird population, and for me (and the birds), the berries; salmonberry, blackberry, serviceberry, and the occasional thimbleberry.

As for birds, the sparrows and chickadees kept up a constant chatter all year round. Robins patrolled the lawns, seagulls, geese and mallards the river. We watched goldfinches, great blue herons, buffleheads, the occasional woodpecker, once a kingfisher. On the other side, a pair of eagles had a nest, easily visible from our vantage point.

That was then. This is now. 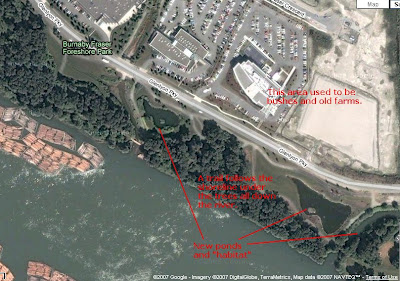 Earth-moving machinery moved in in the last years of the old millennium. The farms were eradicated, the bush scraped away, the creeks filled with gravel and sand. The whole strip along the shore, for miles, is now industrial park.

But our benevolent government did try to soften the blow to the environment; in their bumbling bureacratic way, they widened and gravelled the trails, built cement and metal viewpoints, added signs, telling us about the "habitat" they were creating. To do this, they stripped the soil and bush from another segment of the remaining green belt, and built ponds and waterways to contain and control the creeks.

And the industries moved in across the widened road.

I remember being there one winter around the time we moved to Delta. A large pond, its edges bare mud sloped down from the road to the water's edge, and adorned by a sign proclaiming the "reclamation" effort, and those ratty orange webs they use instead of fences, was showing a bit of greenery at one end; a few reeds in orderly lines, obviously planted. A half-dozen buffleheads were diving there for something; there was hope for the future.

We don't get over there now as often as we did, but there is progress. The grass has grown; the ponds softened with a mix of vegetation. Dragonflies dance over the top. In one, we occasionally see frogs, or heron stalking them.

This spring, the frog pond had been colonized by a plant I hadn't seen before. Attractive enough; like an oversized moss growing underwater, leafing out just above the surface. Very pretty. We photographed it.

I was disappointed not to see any frogs or herons, this time. No dragonflies, either. Just the green, quiet pond. 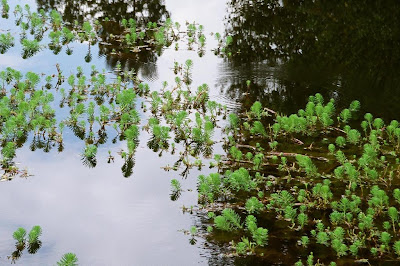 Two days ago, on the UBC site, Botany Photo of the Day, I found this new plant. Myriophyllum aquaticum, a.k.a. Parrot feather, or Brazilian water-milfoil. And yes, it is beautiful; a commenter loves it because it looks like Christmas trees. But it is deadly. 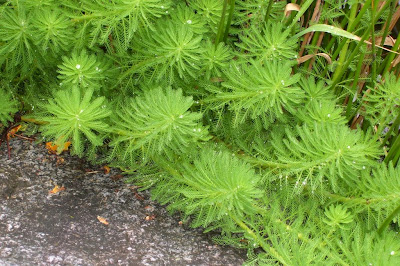 Attractive as it is, it can form a thick layer at the water surface, blocking light from penetrating deeper into the water body. Subsequent population declines in microscopic algae lead to an eventual withering of invertebrate and fish populations.

Not good news. I asked about this, wanting to confirm the ID, and Daniel wrote on to the invasive plants forum. (See the comments on the PotD page.)

No good news there, either. It possibly (not likely, looking over my photos) could be another, similar species, Eurasian watermilfoil, also invasive.

And worse; both these plants are dreadfully difficult to eradicate. Dawnh writes, on the forum,

The bad news is that it is a really nasty aquatic invasive that spreads quickly and seriously alters the physical and chemical characteristics of lakes, ponds and streams. It shades out algae that serve as the basis of the aquatic food web. And it's prime habitat for mosquito larvae.

How did it get here? Easy. It usually does not propagate by seed; most plants here are female. But it's like the invasive blackberry; a small piece of the rhizome, dumped in the water, will take root and grow. Chopping it down won't get rid of it; all those little pieces spread out and become new plants.

People use these plants in home garden ponds, in aquaria, in decorative plantings. Once trashed, if they are not completely destroyed, they can enter the water system and spread, growing so enthusiastically that it can block drainage canals, and even has been known to cause flooding.

It's also very difficult to control. Its deep rhizomes make mechanical methods a short-term bandaid at most. Some herbicides do work to control (but not eliminate), and can also affect native aquatic flora and fauna. And that control comes at a cost: In Washington, the Longview Diking District estimates that it spends $50,000 a year on parrot feather control in drainage ditches.

The hope is that an effective biocontrol will eventually be found for this species. In the meantime, we can all help prevent the spread of Myriophyllum aquaticum by ensuring that we don't dump our aquatic plants or aquarium plants into local water sources.

There is a modicum of hope; scientists are experimenting on various biological controls. I can just hope that, when they find one, that it doesn't turn out to be as detrimental to our local fauna and flora as this beautiful invader.
Posted by Susannah Anderson at 2:09 am