I missed it again. I've been hoping to catch one of my hermit crabs in the process of molting, but no luck. I wish they'd notify me when they start feeling itchy!

This afternoon, two hermits molted. I checked on the tank in the evening, and there were the two sets of legs and two carapaces abandoned on the sand. A bit of searching turned up a small one high up on the sea lettuce, and a larger hermit hanging on an eelgrass leaf towards the floor. And both of them were naked; they hadn't got around to finding new shells yet. I ran for the camera. 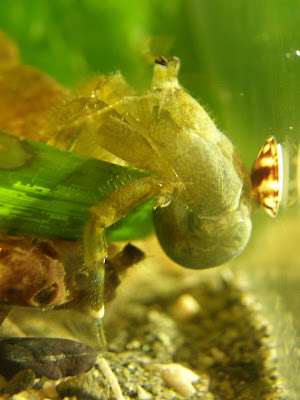 Here's nudist # 1.
The smaller hermit was well camouflaged, but this little guy was in the open, right by the glass. And he was showing off his shell-clutching legs: 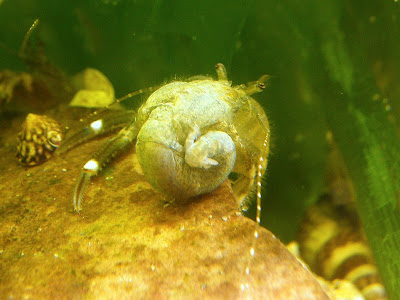 Hermits are decapods; they have ten "legs". Of these, only 6 are walking legs. The first pair is tipped with pincers, one large and one small; the second are clawed legs; the third pair has no claw. The last two pairs are reduced to hooks that hold the borrowed shell. Three of these legs are visible here, sticking out at almost right angles from the abdomen.

The abdomen is soft and unprotected. While the hermit rests after the molt, he is vulnerable to predation or accident. When a second hermit came along, this one left the eelgrass, scuttled across a sand dollar test, and hid underneath. When I checked a quarter of an hour later, he was safely settled into a nice shell, bigger than the one he'd left behind.

Now, four hours later, the little one high in the sea lettuce is still resting without a shell. He must feel safe there, a green coiled youngster wrapped in silky green seaweed.
Posted by Susannah Anderson at 2:18 am