I've been chasing copepods in a few drops of sludge from my aquarium filter, trying to get a decent photo; they are so cute! So tiny! And so busy! 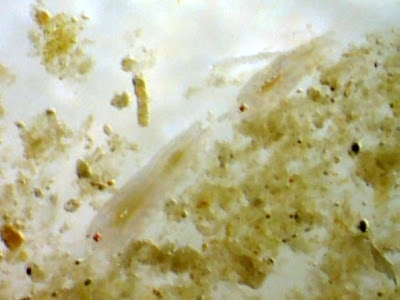 Mate guarding.
I found several couples like this one. One follows the other, nose to tail, never giving up. I assume the female is the one in front. Mostly, single copepods wander about almost randomly, now slow, now stopping, now dashing off in another direction. These pairs zip around at top speed, always connected.

Courtship and breeding is a long affair for such "simple" critters. First, the male must get a good grip on the female. He may (according to the species) need to convince her first, which might take up to two weeks. Persistence counts.

Once she has submitted, he produces a spermatophore, a container filled with sperm.  This he glues to her genital field. Then he may guard her, keeping off other males, until her eggs are fertilized.

After a few hours or days, she produces an eggsack or two (depending on the species, again). Now, she is obviously a female, even to us non-copepod observers; the eggsacks are almost as big as she is. 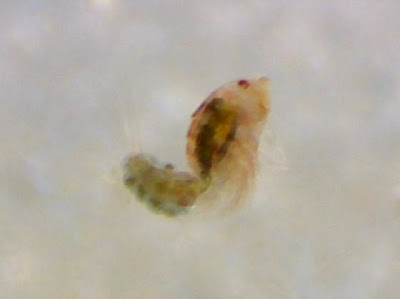 Tiny female. 0.5 mm, not counting the almost invisible part of the tail beyond the eggsack.
I couldn't tell if this one had one or two eggsacks. They were carried beneath the body, with the transparent, pinkish tail swishing back and forth over it. 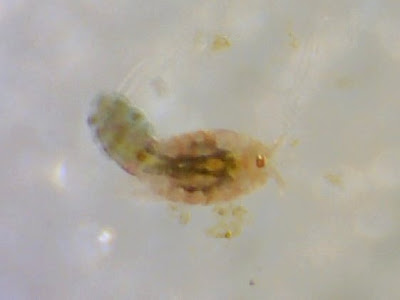 These larger females (twice the size of the little ones, at 1 mm. long), carry the two eggsacks off to the side. They are not as strongly coloured, so often all that is visible in the muck are the two blue-green bags. 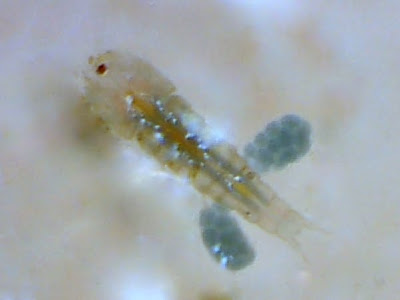 A few days later, those eggs will hatch and she will jettison the empty sacks. The spermatophore may still be attached, and will fertilize the next batch of eggs, too.

I trapped one last December: there's a photo here; it's an adult, either male or non-breeding female. The rest of the life cycle is described in this post.

The University of Oldenburg has more info, and some good close-ups. (Click on the labels at the bottom for more.)
Posted by Susannah Anderson at 3:59 am