It's wasps all the way down

(This is a follow-up to my posts on aphid mummies, Two for the price of one, and The case of the pregnant mummies.)
Thanks to the helpful comments on my aphid mummies, and a generous dose of Google and BugGuide, I thought I had a handle on what is going on in my maple tree. But maybe not; one final comment uncovered the next level down.
Todd suggested the possibility of hyperparasitoidism. And of course I had to look it up. 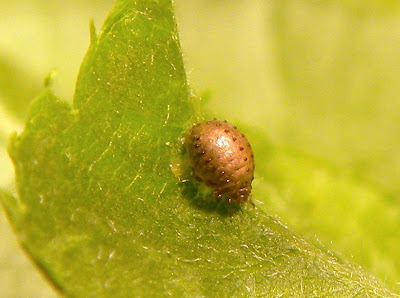 Another aphid mummy.
First, why the "-oid" suffix?

"A parasitoid is an organism that spends a significant portion of its life history attached to or within a single host organism which it ultimately kills (and often consumes) in the process. ... In a typical parasitic relationship, the parasite and host live side by side without lethal damage to the host. ... In a parasitoid relationship, the host is killed, normally before it can produce offspring." Wikipedia

In other words, the aphid is a parasite; it lives on my maple tree, but doesn't kill it or stop it from producing seeds. The wasp is a parasitoid because it kills the aphids.
And hyperparasitoid, then? Again, from the same Wikipedia article,

"It is not uncommon for a parasitoid itself to serve as the host for another parasitoid's offspring. The latter is commonly termed a hyperparasite, but this term is slightly misleading, as both the host and the primary parasitoid are killed. A better term is secondary parasitoid, or hyperparasitoid..."

In the case of the aphid and the wasps, here's how it works; the wasp, possibly of the sub-family Aphidiinae, lays one egg inside the live aphid. She goes on to find the next aphid, and the next ...
The aphid goes on with its life for a while as if nothing had happened. But the egg hatches and the wasp larva grows, taking its nutrients from the aphid body. Eventually, after the larva has molted for the last time, the aphid dies. The larva slits open the underbelly of the aphid and glues it to the leaf, then builds itself a cocoon and pupates. The aphid becomes a mummy, hardened and brown.
Normally, the new adult wasp cuts a hole in the mummy, and leaves to start the cycle again. However, if it is found by a hyperparasitoid wasp, it in turn becomes a host.
This wasp is from a different family, the Megaspilidae. The female drills a hole through the hardened mummy case and lays one egg on (not in) the larva inside. This new egg hatches, and the larva (#2) feeds on larva #1, killing it, then pupates, emerges, cuts a hole as larva #1 would have, and heads off to find its mate.
So, was the wasp that emerged from my aphid mummy a parasitoid, or a hyperparasitoid, as Todd suggests? 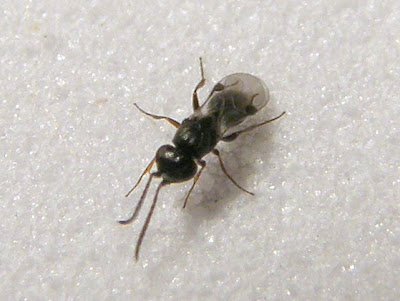 Micro-wasp
I looked up as many of these wasps as I could find, and examined the photos. The closest I could get to my specimen were the Aphidius colemani. (Other similar Aphidius either did not live here or were too large) Bug Guide has a photo of one laying her egg in an unfortunate aphid, and another, whether colemani or not, they couldn't say, but definitely in the genus Aphidius.
The one I had found earlier to match mine (and perhaps a closer match that the A. colemani) was a Lysiphlebus testaceipes, also in the same sub-family.*
Both of these are parasitoids.
I found a photo of a hyperparasitoid wasp, a Dendocerus. It is similar in shape and colouring, and about the same size. The wasp in the photo has "antlers", but only because it is a male. 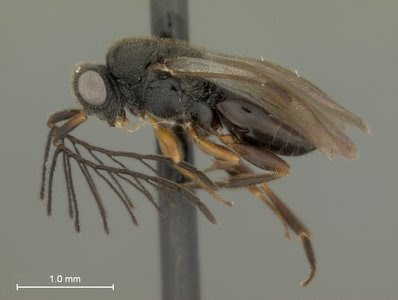 Dendrocerus. Image from NC State U.
Was my wasp male or female? I don't know.
So I still have a mystery on my hands. All I need to do to solve it, though, is find a male and see if it has antlers. Simple, isn't it?
*These classifications are confusing. The Aphidiinae is a sub-family, or maybe a family, in which case it should be called Aphidiidae. This sub-family is divided into tribes, one of which is called the Aphidiini. And one genus in this tribe is called Aphidius. Lysiphlebus is another at that same level.
And they prey on Aphids, of the superfamily Aphidoidea and family Aphididae.
Don't blame me; I'm just sorting it out in my own head.
.
Posted by Susannah Anderson at 1:38 am