If the city of Delta is a lumpy old boot, Brunswick Point is the heel, the Reifel Migratory Bird Sanctuary the spurs, Tsawwassen the ball of the foot, and Point Roberts is the toe. (See the Wikipedia map.)

The entire sole area, spurs to toe, is prime bird and marine habitat. Smack in the middle of this are the ferry terminal and Deltaport, with their high-traffic highways. And at the corner where the ferry causeway leaves the mainland, a large, glassy condominium complex glares out at the bay. 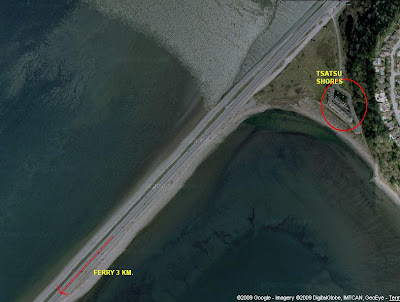 Tsatsu Shores was controversial from the first planning stages; it was expected to be an evironmental disaster. It is the only multi-unit housing on that coast, which otherwise is limited to single-family dwellings, farm land, or wildlife preserves. And there it sits, like a sore thumb on the beach, at the bottom of a cliff where herons and eagles nest. 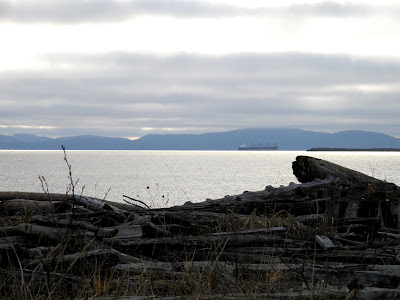 From the front of Tsatsu Shores.
At least they haven't "improved" the beachfront too much; birds still have it more or less to themselves. 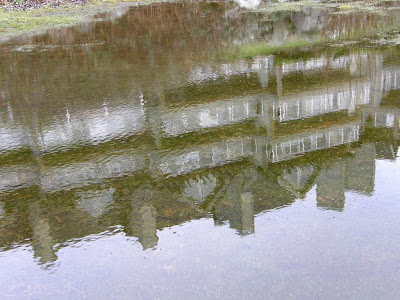 A glimpse of part of the front aspect.
We went there looking for herons. We would have climbed down the steps at Fred Gingell Park, as usual, but the weather was iffy, and I wanted to be closer to the car. We parked in a pot-holed clearing the other side of a blackberry patch, and took the trail through to the beach.

And, at Tsatsu Shores, there were the herons! 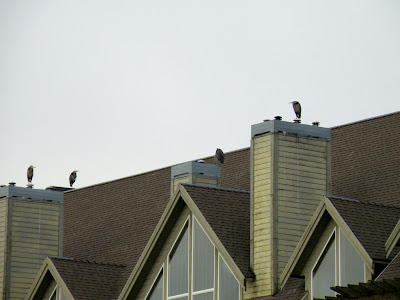 Roof decoration. And wall decorators.
I counted 6 herons from the front; we saw one, later, in back. Some stood on the ridge of the roof, but the privileged ones each had their own fenced (and heated, maybe) lookout post: 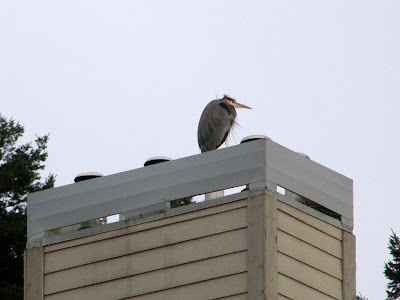 Standing on a foot-warmer.
We walked down the beach in front of the cliff, scanning the trees for nests, eagle or heron. It was a dark day, with the sun barely yellowing a tiny area of the sky; not good nest-hunting light. We saw no nests.

But click on the photo above; see, through the crack in that front corner, a bunch of sticks? A beautiful spot for a heron's nest! Maybe every tower has one. It seems that the herons, at least, have adapted to the human encroachment on their land. 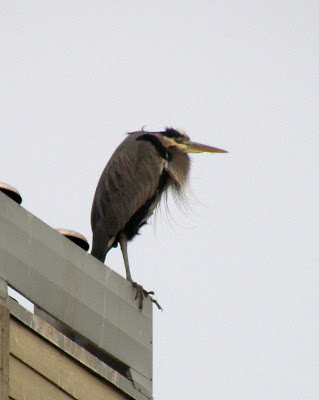 On guard.
I don't usually get to look at herons from this angle. I suddenly got an inkling of what it would be like to be a frog, looking up at that vicious beak, those staring eyes. Scary!

There were few other birds around. Wrong time of day, wrong tide; it was high and coming in. A seagull floated on the waves; a line of geese flew overhead. And just offshore, a cormorant sat on a barnacled rock. I think it's an immature; it's dressed in dappled browns. (We photographed it against the light, so the colour turned out spotty.) 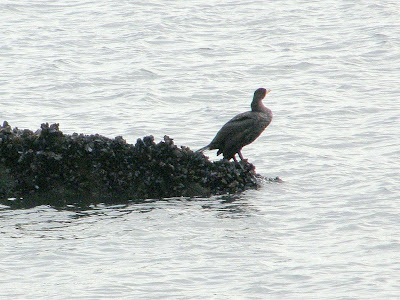 Double-crested cormorant.
We were freezing. With two pairs of gloves on, I could barely manage the camera shutter, but my finger-tips still ached. We hurried back to the still-warmish car and went for coffee.
.
Posted by Susannah Anderson at 2:50 am