This is a follow-up on my post "Blanket on a Stick", and posts and comments by Seabrooke, and Hugh:

Actually, the story starts earlier, and it's a chain reaction. A quick recap: on the first of January, Gerry at Naturespeak, blogged about the Shy Cosmet (Limnaecia phragmitella) larvae he had found in a cattail head. Seabrooke read this, and brought home her own cattail in March; she discovered one larva. I picked up on this, read about them in BugGuide, collected a cattail, and found dozens of similar caterpillars.

However, BugGuide lists them as an eastern moth; BC is not in their range. What were the ones I had, then?

I had filled the birdhouse with cattail fluff, probably including a fair number of larvae. And I had a Tupperware lidded bowl with more fluff and larvae. Laurie contributed another cattail head, undisturbed. I tied a plastic bag loosely around it, to keep the inhabitants from escaping, stacked it in a corner, and left the whole shebang to sit until June or July, when the moths should be emerging. (If they were the Shy Cosmet, that is.)

And forgot about it; this has been an eventful summer. And here it is, the end of August.

Yesterday evening, I brought everything inside; the birdhouse: 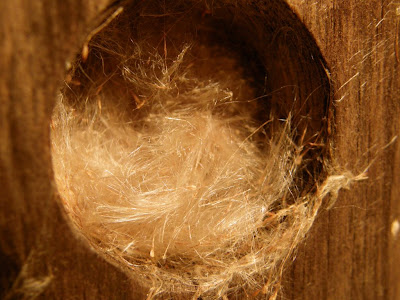 Front door, with the bedding hanging out.
... the Tupperware, and the bagged head.

After all the rain we've had, I expected to find mold and mildew in the birdhouse. But the fluff was as fine and dry as the day I jammed it in. I pulled out a couple of handfuls and inspected them. No larvae, no moths, no other insect life. I re-hung the birdhouse, disappointed.

The bag next. I opened it carefully, removed the head. It was intact. I pulled apart some of the fluff. No larvae, no moths, no other insect life. Oh, well.

I shook out the empty bag, and two moths fell out. They looked dead; well, they would be, locked inside the bag like that. But when I touched one to position it for the camera, it moved. 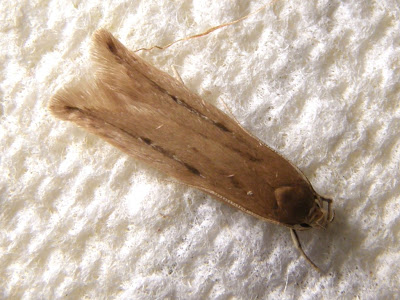 Shy Cosmet, about 1 cm. long.
These were beautiful moths, if tiny. The wings, legs, antennae, head, all reflect a warm, golden light; like something fashioned by a fine jeweller. The camera boggles at it, and barely hints at the metallic gleam.

The wings are much longer than the body, finely feathered, curved outward and upward at the end. 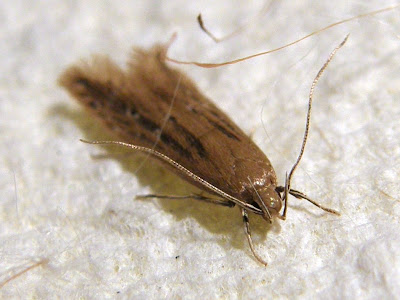 Besides the antennae, the Shy One carries two long spikes upright in front of the head. I don't remember seeing anything like this before. It belongs to the family of Twirler Moths (Gelechiidae), and those spikes, or labial palps, are characteristic. 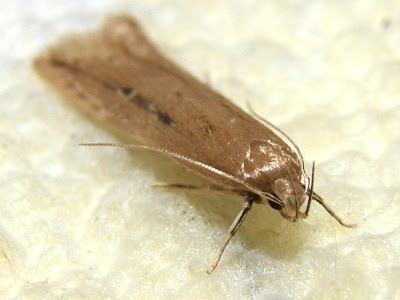 The moths started walking around on the paper towel where I'd dropped them, and one found a damp spot. He stopped right there and started drinking. (Look closely; you can see his feeding tube.) I gave the second one a drop of water, too.

But were these the insects that had been in the cattail, or had they somehow found their way inside the bag through the knot? I turned to the Tupperware container, and inspected its contents. One dead larva. Two dead moths. The same species as the live ones. That settled it. The moths are the adults corresponding to the caterpillars I found in the spring.

And the Shy Cosmet has come to the west.

After their drink, the surviving moths were in the mood for exploring. I collected them (had to chase one) and took them outside. 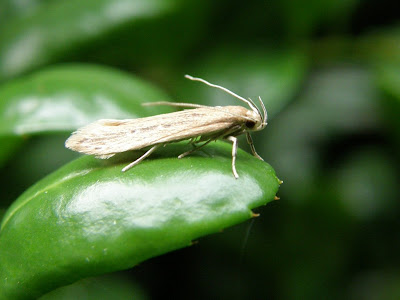 Sitting on the hedge.
Next time I looked, they were gone.

One of the Shy Cosmets on BugGuide had been found half a mile from a cattail marsh, so these guys have a chance at finding a home. I hope.
.
Posted by Susannah Anderson at 1:04 am