Woah! What is this all about?

We were visiting with a neighbour this afternoon in his back garden, when I saw, on a toolbox, an ant. Nothing unusual about that; there were ants all over his place. But this one was behaving oddly, running around and around in a circle a couple of inches in diameter, always clockwise. I took a few photos, blurry ones because it was running fast. 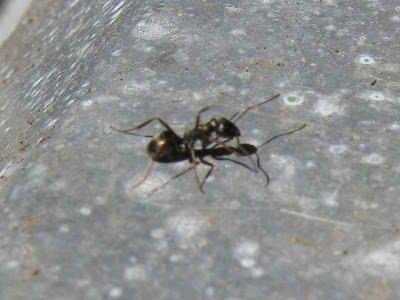 We came home and I made tea. While we were drinking it, Laurie suggested that I could videotape the ant. Good idea: I finished my tea and walked back to the neighbour's place. (All that rigamarole to define the time span; 15 minutes to half an hour.)

The ant was not on the toolbox any more, but my neighbour thought it had gone down the crack. I moved the toolbox a few inches, and sure enough, there it was, going around in circles.

.
Note how the ant responds to the fuschia petal when it blows into its pathway; it deals with the obstacle, then returns to the circling behaviour.

I checked out some of the other ants in the vicinity; they were all behaving normally.

What is going on? Some sort of parasite in its brain? Poisoning?

Anybody know?
.
Posted by Susannah Anderson at 5:39 pm