Back in October, as some of you may remember, I photographed a Cabbage White butterfly caterpillar turning into a chrysalis, and blogged about it here.

The adult butterfly should hatch sometime in the spring. One site I found suggested it may be as early as February. So it is time I started monitoring more closely.

I have had it outside, in a semi-sheltered location, still in the big salad bowl where it anchored itself on the lid, and with a couple of layers of open-weave cloth over it to keep out predators, but allow air circulation. 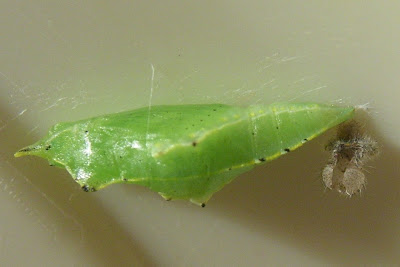 Here it is, as I last photographed it, at the end of September. It is anchored at the tail end (where the discarded skin is) and with a thread around the middle, and hanging upside down (judging by the position of the caterpillar when the transformation started).

I brought it inside tonight. Fingers crossed: hoping I would find it still alive and growing. I photographed it quickly, not wanting to expose it to a warm lamp any more than was necessary, bundled it up again, and put it back outside.

Here's what I found. 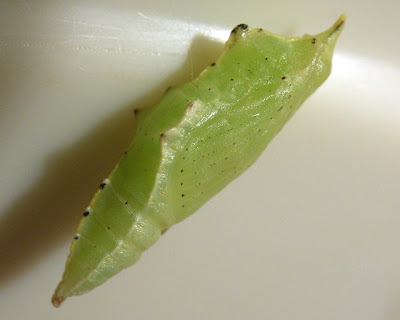 There are a few changes. It is no longer attached by the tail, but is swinging free on the thread around the waist, right side up. The old skin is still there, but no longer tied to the chrysalis.

It seems to me that the markings along the wings are more pronounced, and the bulges that I still think may be eyes are rounder and have a rim on one side.

Floating free as it is, I got a first look at the belly. 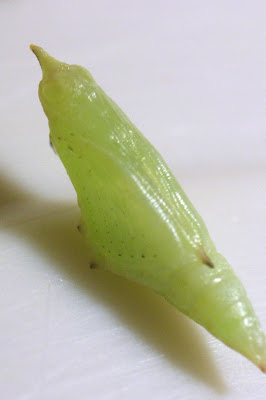 Some kind of apparatus there. Legs? Antennae? Mouth parts? Time will tell. The belly was tight against the lid in the fall, so I don't know whether it has changed since then.

And back to waiting again. I hope I have done it no damage; I figure the disturbance was no more than what would have been normal on the underside of a leaf in a bit of a wind.

We'll see.
Posted by Susannah Anderson at 1:01 am