Pareidolia, according to Wikipedia, is

"a psychological phenomenon involving a vague and random stimulus (often an image or sound) being mistakenly perceived as recognizable. Common examples include images of animals or faces in clouds, seeing the man in the moon, and hearing hidden messages on records played in reverse. "

We've all read about the Virgin on a wet glass window or in disintegrating cement under a bridge, but pareidolia happens much more frequently than those few instances. In cloud formations, or plywood markings, or book foxing, or -- you name it -- we've all seen it.

And sometimes we get "proof", in the shape of photographs.

Laurie has taken a few of those recently, some on purpose, some not. 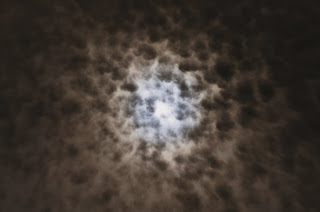 Here's one, for starters. A cloud formation, on a dark day. But look at it again. Click on it, to see it full-size, and walk across the room to look at it. (There's a reason for that; I'll write about it in a future post.)

Then come back and tell me what you see.

(BTW, that is the moon behind the clouds.)