Too much of a good thing. Far too much.

So what happened? Bella Coola residents know about the river and build for the periodic floods. Houses are built above the water level. Dikes and rip-rap reinforce unstable banks along the rivers and creeks. Bridges, even on the smaller creeks, are made to withstand the occasional flood-driven log jam. Road maintenance is conscientious.

And now ... the entire village of Hagensborg sits with its knees in the water. All the bridges from one end of the valley to the other, are damaged, some entirely gone. A sandbank up-valley caved in, taking a long section of highway with it. The "hill" on the road out to the rest of the world is impassible. Salmon, up the river for the annual spawn, lie dead in driveways. A shop ended up in a stand of trees downstream. The winter's supply of firewood, so neatly stacked for air drying, floats here and there.

And it's not flood season yet! That's still a month or so away. 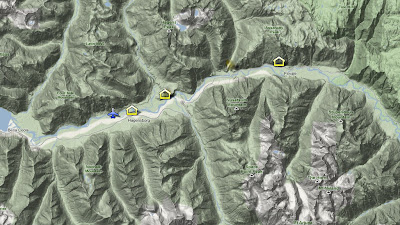 The fall high water comes about the same time as the first hard frosts in the valley. "Up top", on the mountain peaks (5000 to 8000 feet), the winter snow cover is building up. When it rains on top of this new snow, there is a quick melt, and a rush of water streaming down the river. Noisy and violent it may be, but it usually stays between the river banks.

This flood is different. "Grizzly", at Bella Coola Blog, explains;


Piecing together comments on the extent of the rainfall it appears that what made this flood so big, is that the entire watershed of the Bella Coola - all the big tributaries, Salloomt, Nusastsum, Talchako, Atnarko all received a massive amount of rain.  Often these storms are most intensive in the lower valley or one of the tributaries, or sometimes the upper valley and not the lower valley, but this one was widespread.  You have a situation with a watershed of several 1000* sq km covered in 9 inches of water.

In 36 hours, he reports, the rainfall in the valley measured 9.6 inches (245 mm.) I checked the normal averages: taking an average from 1971 to 2000, the rainfall for the entire month of September was 3.3 inches (83.5 mm.). Even for the rainiest month, October, the total only went up to 7.7 inches (194 mm.). That's per month. The sum for those two months is only a smidgen more that what fell in one and a half days this weekend.

9.6 inches doesn't really sound that much. But concentrate all that at the bottom of a deep, narrow valley, and it adds up to a torrent in a hurry to reach the sea. People report up to 8 feet of water over the highway, 4 feet in some houses.

And it's still raining. The water level dropped during the day today, but it is rising again. The forecast is for another 2 to 4 inches of rain by Tuesday night.

If you're reading Grizzly's blog, or news reports, or following the Facebook photo page, the map above might be helpful. Bella Coola townsite is at the bottom of the valley, where the inlet meets the river. The airplane icon is at the airport. The first yellow house icon is where I stayed this summer, in the heart of Hagensborg.  The second is the Saloompt bridge, (one that will be very difficult to replace, crossing an extremely fast section of river. For now, residents have been rigging up a pulley system to haul food and other supplies across the river.) And the third, on the right, is Firvale, and the site of my old home.

Here's the meadow I wrote about yesterday: 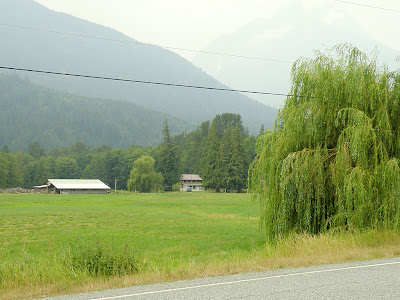 My neighbours' house is the one among the trees at the right. Last I heard, the water was to the top of the fence posts around the barn. 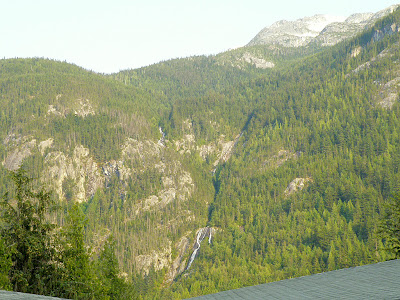 Pre-flood photo. One of the many creeks pouring down the mountainside into Hagensborg. The schoolhouse roof in the foreground. 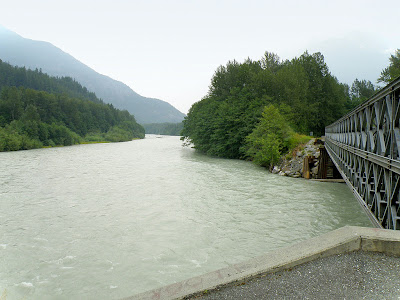 For the record: the Saloompt bridge, in happier days. The normally greenish water (glacier runoff) today is a murky brown. And the river comes right up to the road.
There's an old native legend, about how there once was a very big flood in the Bella Coola valley, and a chief made a raft and saved his people. When the flood abated, he draped a rope around the tip of Saloompt mountain and tied the raft there. You can still see the mark of the rope, they say.

These days, the rafts are blue, inflatable, and made of plastic.
Posted by Susannah Anderson at 3:28 am