When did it get to be Friday? I've mislaid a few days somewhere. Anyone see them lying around?

What else did I miss?

--Festival of the Trees, for one. It's been up at Treeblog since Monday. "Have you ever fallen in love with a tree?" asks Ash. I have. And there are many more worth loving in this FotT.

--And Duncan has connedpersuaded an old bushman into writing up the latest I and the Bird. In his own way, of course;


"Now, I’m just an old bushman livin’ in a shack out in the scrub, and I s’pose a lot o’ this might sound like some sort o’ strange lingo ter you foreign jokers, but if yer think I’m gonna start talkin’ in a lah de dah voice you’ve got another think comin’."

But apart from thinking that if it's black and has wings, it's a crow, he did a great job! Go see.

--I sent in the brown beetle from the chile jar to BugGuide. It's a Drugstore Beetle or Biscuit Beetle, Stegobium panecium. And a very interesting beetle it is!

It is similar to the Cigarette Beetle, but slightly larger, and its antennae are clubbed rather than serrated. The Cigarette beetle belongs to a different genus, though. Our critter is the only member of its genus, and can be found worldwide, especially in warmer climates. Mine arrived from Mexico. 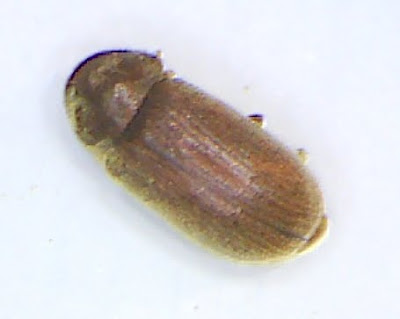 The beetle. Like a tiny brown bean.
From Wikipedia:


As their name suggests, Drugstore beetles have a tendency to feed on pharmacological products, including prescription drugs. They will also feed on a diverse range of dried foods and spices, as well as hair, leather, books, and museum specimens. They can bore into furniture, and in some cases tin foil or sheets of lead.

BugGuide's list of beetle edibles adds chocolate (no!), flour, breads, cookies ... Non-food (for us) items include wool, horn, and wooden objects. Adults do not eat; the larvae more than make up for it, munching away on anything they find for up to 20 weeks before they pupate. They're tiny, almost transparent grubs that look more like dust than insects. Something to watch out for. I'm glad my crop has been tightly capped in the chile jar. 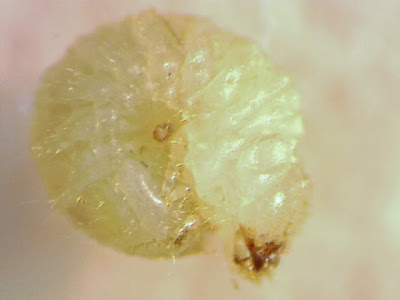 Larva, greatly enlarged.
After the larva has fattened up (4 to 20 weeks) and pupated (2 weeks), the adults live from 2 weeks to 2 months (Wikipedia) or up to 90 days (Stored Grain Research Labratory), not eating, busy at mating and laying eggs. The female lays about 75 eggs randomly amongst stored foodstuffs over this time span.  And then ... Watch out! They're hungry! 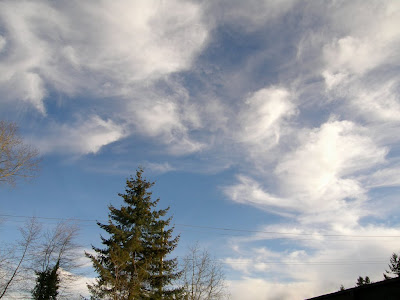 Through the car window
A Skywatch post.
Posted by Susannah Anderson at 4:21 am

Email ThisBlogThis!Share to TwitterShare to FacebookShare to Pinterest
Labels: beetle, Festival of the Trees, I and the Bird, invertebrates, Skywatch