We're in September already, and it's time for the Annual Rock Flipping Day. This year, I will be trying my hand at co-ordinating it.
Rock Flipping Day was started by Dave Bonta and Bev Wigney in 2007. The idea is simple; in Dave's words,

we pick a day for everybody to go outside — go as far as you have to — and flip over a rock (or two, or three). We could bring our cameras and take photos, film, sketch, paint, or write descriptions of whatever we find. It could be fun for the whole family!

On 9/2/2007, people flipped rocks on four continents on sites ranging from mountaintops to urban centers to the floors of shallow seas. Rock-flippers found frogs, snakes, and invertebrates of every description, as well as fossils and other cool stuff.

And someone, I remember, too busy to get away, flipped over a rock on her desk, and showed us the bottom. (Or was that in 2008?) 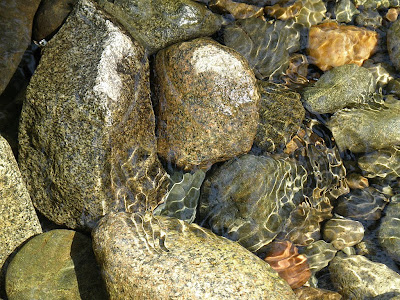 Possible rock-flipping subjects. Cougar Creek.
So here we are in September, 2009. Dave isn't able to co-ordinate this year, and I came to the table too late, so we won't be going with the first Sunday in September this time. Let's make it the third, September 20th. Mark that day on your calendar!
If you're joining in for the first time, here's a quick rundown of the procedure:
There is a handy badge available for your blog, here.
Prizes? Dave handed out purely imaginary prizes in previous years. I'll have to think about that.
And a caution from Dave:

One thing I forgot to do in the initial post is to caution people about flipping rocks in poisonous snake or scorpion habitat. In that case, I’d suggest wearing gloves and/or using a pry bar — or simply finding somewhere else to do your flipping. Please do not disturb any known rattlesnake shelters if you don’t plan on replacing the rocks exactly as you found them. Timber rattlesnakes, like many other adult herps, are very site-loyal, and can die if their homes are destroyed. Also, don’t play with spiders. If you disturb an adjacent hornet nest (hey, it’s possible), run like hell. But be sure to have someone standing by to get it all on film!

I'll post updates as we go. Keep checking back.
And most of all, have fun!
*Update: from David Steen, in a comment on The Obligate Scientist,

A reminder to all rock flippers that they should be flipped back into place. If there are critters underneath, don't place the rock back on top of them, move the animals to the side, replace the rock and let them scurry back.