Of feathers and milk

A year ago last February, we happened to walk under this pier and look up. The pigeons were nesting already. I was wondering, last week, how many there would be now, as summer approaches. 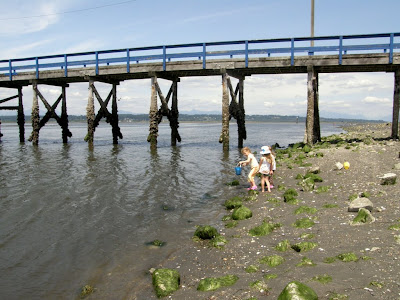 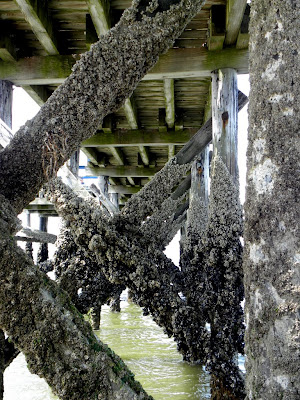 The underside of the pier, with nests.
Just as before, each crossbeam held at least one nest, or at least a few pieces of weed and straw to simulate a nest. Do chicks never fall out of bed? 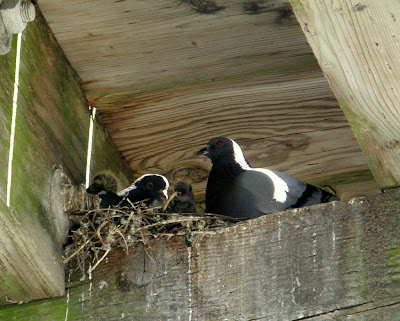 Two chicks, two adults.
This June, they're probably well into their second brood of the year, and the squabs (pigeon chicks) are quite large already, but still only partially feathered. (Most of these are probably about three weeks old; compare with the set of photographs at the bottom of the Wikipedia page.) I love the yellow "Mohawks" they are wearing. 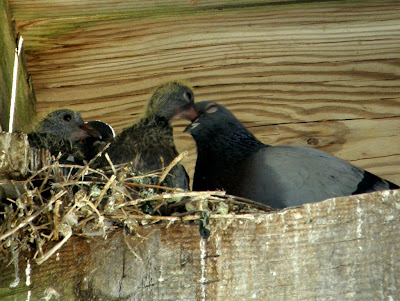 Feeding baby.
I watched the parent feeding her chick for some time. (S)he doesn't come and go, each time with fresh food, as some other birds do (chickadees, for example). She sat there the whole time. Every minute or so, she would close her eyes and open her mouth, and the chick would reach in for a fresh mouthful of milk and mush. She must have been regurgitating a cropful, bit by bit.

Crop milk bears little resemblance to mammalian milk, being a semi-solid substance somewhat like pale yellow cottage cheese. It is extremely high in protein and fat and contains more of it than cow or human milk. Both male and female adult birds produce crop milk and share in the feeding and care of the young. ...

Pigeon's milk begins to be produced a couple of days before the eggs are due to hatch. The parents may cease to eat at this point in order to be able to provide the squabs (baby pigeons and doves) with milk uncontaminated by seeds, which the very young squabs would be unable to digest. The baby squabs are fed on pure crop milk for the first week or so of life. After this the parents begin to introduce a proportion of adult food, softened by spending time in the moist conditions of the adult crop, into the mix fed to the squabs, until by the end of the second week they are being fed entirely on softened adult food. (Wikipedia) 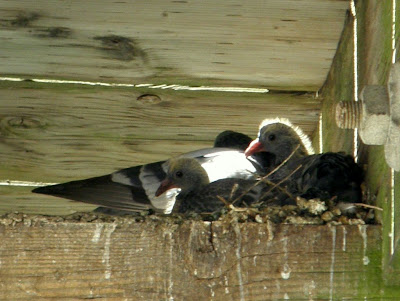 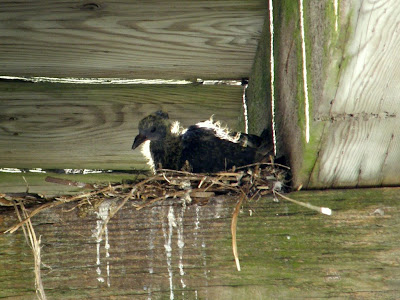 Curly yellow feathers.
This pair, one brown and one white, were smaller and fluffier than the adults, but seem to be completely feathered already. 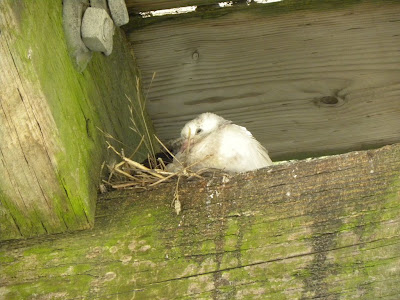 Feral (city) pigeons breed several times a year, at any season, although they prefer the warmer months. They incubate a clutch of two eggs from 15 to 19 days, on a swing shift:

The squabs, once hatched, are ready to leave the nest in a month, But the female may have already laid the next clutch of eggs over a week before; the half-grown squabs share the nest with them. The male takes over most of the feeding during this time.
Conscientious, hard-working parents. And they don't even look frazzled!
.
Posted by Susannah Anderson at 12:49 am