The tenacity of worms

On the White Rock beach at low tide, little worm tubes stuck up out of the sand. Laurie pulled at one to see what was inside. It resisted, and when he pulled harder, it broke. He tried digging another out, then another; even though he gripped them a few inches down, they stayed put until the tube broke. No worms appeared. They won that round.

We did find out one thing. The empty tubes left in Laurie's fingers matched the ones we were wondering about last winter. (Photo)

(A later photo revealed the owners of the tubes to be those Bamboo worms. Tough little critters, they are.)

Ok, so fingers aren't the best digging tools. That week, I invested in a child's toy shovel, just the right size for my bag. And, while I was at it, a box of the best freezer bags in the store. Now I was ready for reluctant worms.

On Boundary Bay beach, the next week, I dug in deep beside a worm tube. The shovel broke when I tried to lever the tube up. I held the handle below the break, and turned over the sand; the worm was long gone. Worms 2: Us 0.

Down at the lowest level of the low tide, I scooped sand indiscriminately into a freezer bag with the remains of the shovel. In a separate bag, I collected a litre of saltwater. At home, I examined my loot; here's what I found, and what later transpired:

On with the tale. I put the bulk of the sand in a large container, added water to a depth of an inch, returned the worms to the sand. The tiny clams went to join the whelk and the broken worm. The rest of the water I put in the fridge for later. Both containers went outside, out of the heat of the house.

The next afternoon, Sunday, I checked my menagerie. The snail was alive. Some of the clams were on the surface of the sand, still closed. (Alive, then.) The worm looked dead, but when I touched it, it writhed. I poured off the old water, gently, and replaced it with water from the fridge.

The used water freshened up the large container. There, some of the worms were floating, dead. But the sand, viewed through the lens, was bubbling and squirming; something was alive down there.

Monday, Tuesday, Wednesday, Thursday, ditto. Everything was alive, even the wounded worm.

This morning (Friday), I looked everything over carefully. I discovered some animals I had missed before, maybe because they were so very tiny: 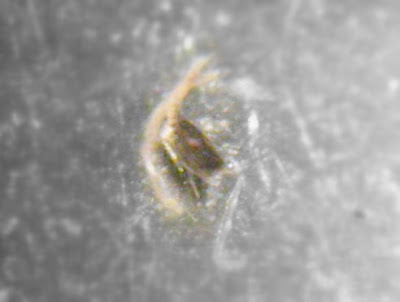 I think this is a sculpin. In a teaspoon, reflected in the stainless steel. At least, it moved like a sculpin would.

And these, even with the lens, are tiny swimming dots. They move more like fish than like the green crustaceans I expected to see. 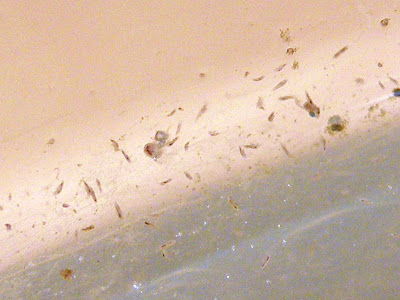 Barely more than an eye and a spinal cord in a strip of transparent flesh.
But my poor broken worm was the real surprise. It is moving more strongly now; it still rests on the surface of the sand, but it responds to light (or heat?), movement, and touch. And the broken end, where before I could see the opening of the intestinal tube, is closed and growing.

I found the worm in a University of Alaska site; it's a Nephtys caeca, a Sandworm. (Sandy, for short) It's a burrower and blind, it feeds on other worms and crustacea, and may live as long as 7 years. And it ...

demonstrates powerful regenerative capabilities. The animal can regenerate tentacles and heads that have been removed by predators.

I think its head is what I left behind on the beach. It's probably busy building itself a new tail now.

Tomorrow, if all goes well, I will collect another litre of seawater. Maybe I can keep poor Sandy alive until it's healed. I'll try.

And I'm taking my gardening hand shovel this time.

.
Posted by Susannah Anderson at 7:21 pm