In Van Dusen Gardens last week, the damselflies were hunting over the ponds. 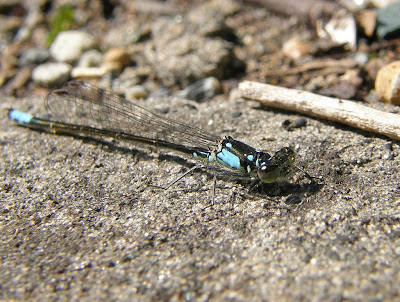 Pacific Forktail, Ischnura cervula
It's probably a male, because the female torsos (photo) are not usually blue; they are a mix of browns and orange. The four tiny blue dots on either side are also a male characteristic.

The name, "Forktail" refers to a tiny bump on the tip of the male's abdomen, not visible without a lens.

I was surprised, examining my photos, to see that they were haloed by white hairs. I had to look at a stack of damselfly photos to convince myself that this is the way they are, that it was not an infestation of some sort of fungus. 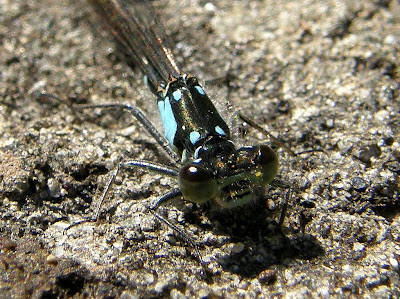 Hairy damselfly.
These hairs are useful, and important; the female lays her eggs underwater, while the male holds her, and rescues her once the job is done. The hairs retain bubbles of air, which enable both of them to remain underwater for up to ten minutes.

The lower part of the face, including half of the eyes, looks, here, as if it were clouded. In other lights, it glows a vivid green.

And while we're at it, I adjusted the colours of a photo to bring out the spots on the wings. One spot per wing, a pale brown oval with a dark center. 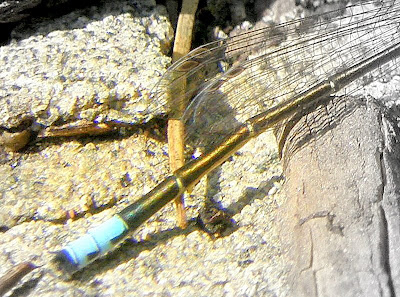 I looked these up. The wingspots are called pterostigma, and in an insect that hunts on the wing, are essential for survival:

"The purpose of the pterostigma, being a heavier section of the wing in comparison to nearby sections, is to assist in gliding. Without the pterostigma, self-exciting vibrations would set in on the wing after a certain critical speed, making gliding impossible." Wikipedia

Stabilizers, in other words, like those on an aircraft. In most species of damselflies, as in this one, they are located on the leading edge of the wing.

And this was supposed to be a quick post; load a pair of photos, name them, and off to bed. But I made the mistake of Googling those hairs, and look where it led me!

.
Posted by Susannah Anderson at 2:08 am