We don't often see fish on the beach, except for the tiny, almost invisible, tidepool sculpins. But down at the water's edge, at the low-water mark, we found three this week. Two of them I had never seen before.

This Pacific Sand Lance was on Crescent Beach. 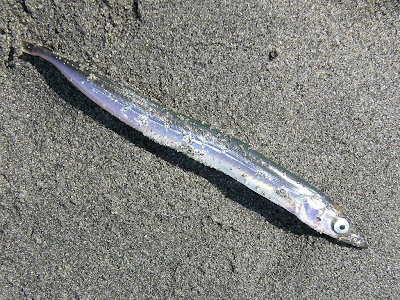 Ammodytes hexapterus
This was one of three, all about 6 inches long, all dead. None showed signs of injury. The mature Sand Lance grows to about 11 inches long, so these were young ones.

They swim, at times, in huge schools, and I think they are the ones I watched, years ago, off Deep Cove dock. As adults, though, they bury themselves in the sand, especially at night.

"Some species are inshore coastal dwellers, and digging for sand lances to use as a bait fish has been a popular pastime in coastal areas of Europe and North America." Wikipedia.

That's a new concept for me: digging for fish.

Wednesday we walked the low-tide level at White Rock. In a shallow pool, this white-headed sculpin lay, barely moving, watching us. He didn't burrow into the sand, the way the usual sculpins do, relying on his unfishlike shape and immobility, perhaps, to avoid notice. 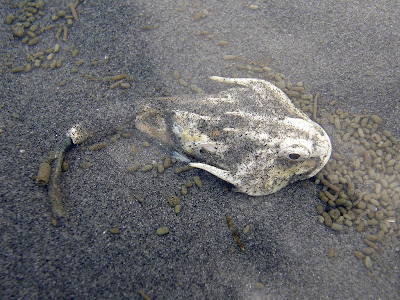 "These medium sized sculpins are immediately recognizable by their proportionally large head. When threatened they will erect their sharp opercular spines which somewhat resemble the horns of bison." E-Fauna

E-Fauna's photo of a Buffalo Sculpin shows a green head. Sculpins, in general, come in a variety of colours within the same species. The Encyclopedia has a red-headed Buffalo, and a grayish one. 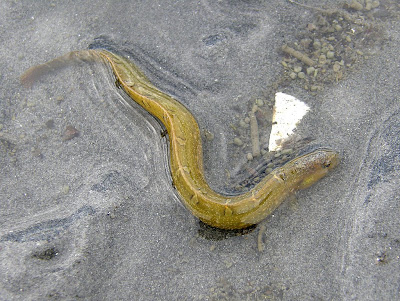 Crescent Gunnel, Pholis laeta.
In the shadow of the pier, we found this snake-like fish, about 7 inches long, half in and half out of the water. It is a beautiful, translucent green; the photos don't do justice to it.

In this exposed situation, (it usually hides in seaweed) its best option was to play dead, but when I came down a few inches away, trying to get a head shot, it moved away slowly, slithering snakily. 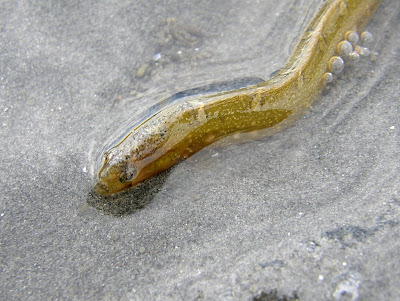 Frequently in intertidal areas, in tide pools or under rocks protected by seaweeds. May remain out of water under rocks or seaweed. Probably feeds on small crustaceans and marine worms. Breathes air when out of water. Fishbase

This explains why, when the gunnel put its head underwater, it exhaled a series of bubbles. An amphibious fish on our beaches; will wonders never cease!