A couple of non-singing residents of Iona Island

Just a grey blob, not moving, far away on an island in the pond. But then, any rock there would be covered with reeds, I thought. So I took a photo. 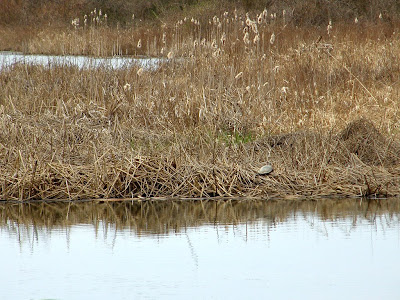 Turtle, catching a few rays.
This one was moving, and fast. Laurie found it in the blackberry patch: 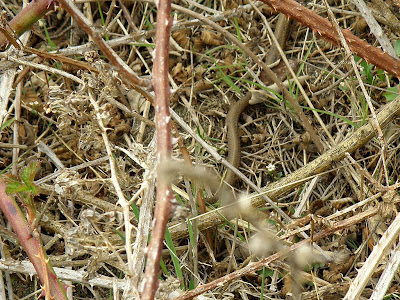 Garter snake. At least, part of a snake. Almost patternless.
The turtle could be B.C.’s only remaining native pond turtle, the Western Painted Turtle, or more probably, the imported Red-Ear Slider. They are distinguishable mainly by the red patch on the side of the red-ear's head. These are often released by bored pet owners; most turtles we see in the ponds are red-ears.

The snake is a native, probably the Northwestern Garter Snake.*

*Update: PSYL asks, in the comments, why the garter snake has no stripes. I really should have "shown my work" in the post, so here goes:

I am used to seeing very stripy garter snakes.

However, quoting from the BC Reptiles page on Northwestern garter snakes, "adults are black, brown, or olive in colour. This may be accented by a stripe down the back. However, the width of the stripe varies, and sometimes the stripe is missing entirely. ... The colours can appear muted because of the strongly keeled scutes (scales with a ridge running from front to back), a trait shared with all other Garter Snake species."

If you click on the photo to see it full size, you can see a very faint yellowish stripe down the side. And the ridge along the back is there.