Something old, something new: same thing.

No matter how much it snows, there's always something to eat on the beach. And sometimes, the worse the weather is, the more food is available, as plants and animals are ripped from their hiding places and tossed helter-skelter on the shore.

The crows and seagulls were feasting on Monday. 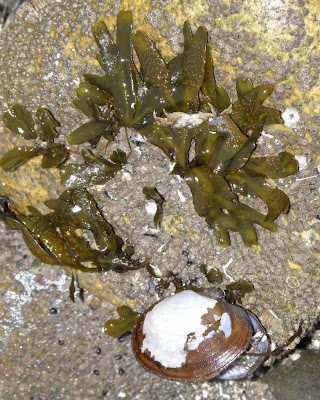 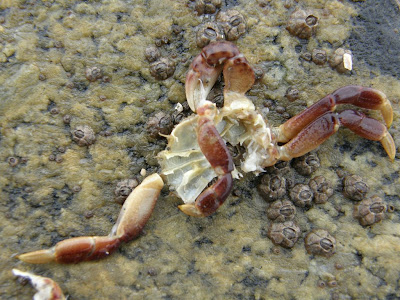 Leftover from a crow's dinner. 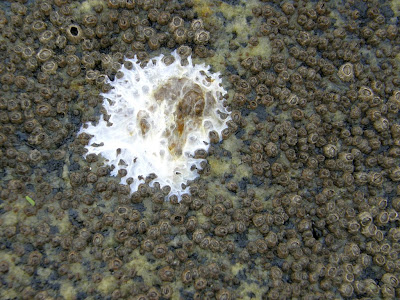 Seagull poop on barnacles. I know; ewww! But I liked the pattern. 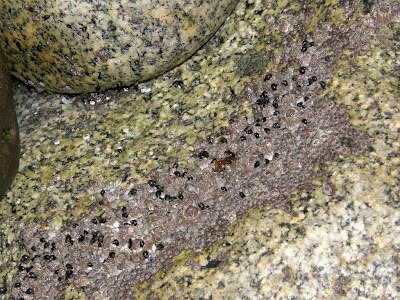 Barnacles and snails. These tiny ones are safe from the birds, but I have seen great patches of the larger barnacles broken off to get at the meat.
Snow on salt water is the same as rain. In this climate, it's the way things are. The real disruption to life on the White Rock beach in the winter is due to the shape of the land. From the far side of Kwomais Point to the last houses of White Rock, the shore is lined with high cliffs. Even at the beach area, the buildings facing the pier have their backs jammed into the hill; the streets here go up so steeply that each level of houses looks over the roofs of their neighbours. So as this heavy snowfall thaws (finally!), meltwater rushes down onto the beach and into the salt water in torrents. 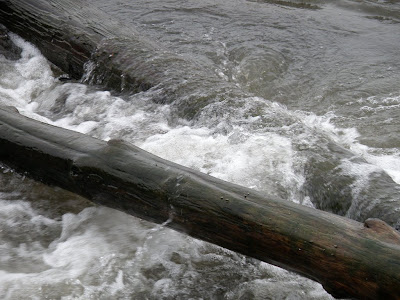 One of the drainage outlets. We usually step over this; it's barely a trickle.
The results; uprooted seaweeds and eelgrass: 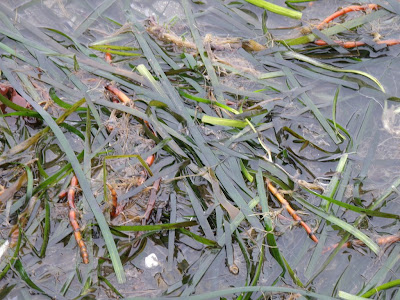 Small dead animals: The crab above, the starfish I posted yesterday, and this: 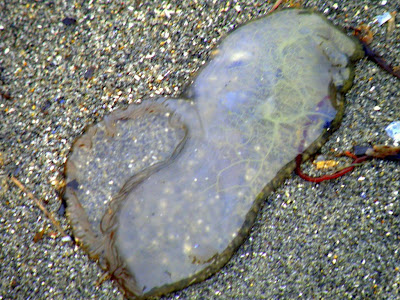 Melibe leonina, the hooded nudibranch.
This was a large sea slug, about 5 inches as it lay. We found 3 of them, very dead, barely more than grey blobs on the sand. I have saturated the colours on this photo, to show the network of green tubes in the body. This is the digestive gland of the slug. The tentacles around the lip of the hood turned out to have some colour, too; usually they seem as translucent as the rest of the body. Here's a typical photo.

At water's edge, I noticed these: 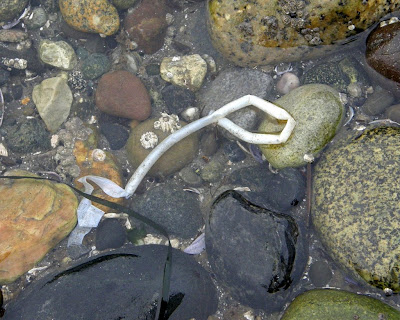 Looks like a bit of upholstery piping.
I picked one up. 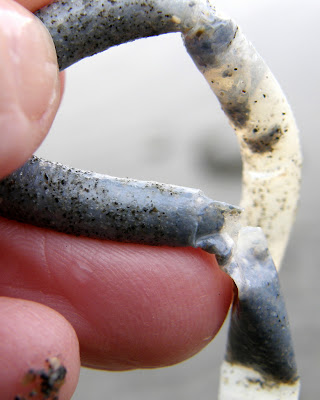 It was about the thickness of a drinking straw, smooth and flexible, open at both ends. Part of it was full of what looked like sand.

Once I had noticed them, I saw that they were all over. Most were in small pieces, but many were well over 6 inches. Most of them were empty. 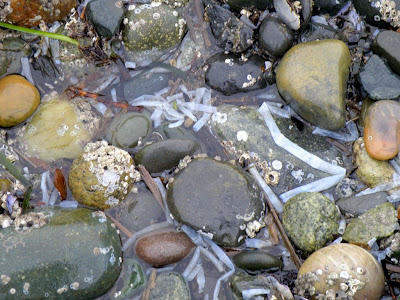 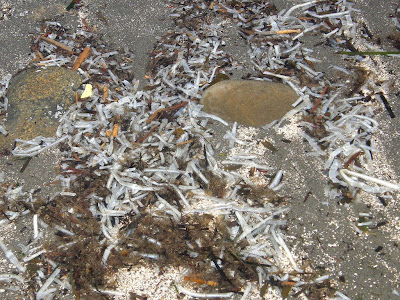 I have been on this beach hundreds of times, starting when I was a kid. I have seen piles of these, in smaller pieces, many times. I have never noticed them before; it was only when I knew what I was looking for that I remembered having passed them by. How blind we can be!

But what were they? We looked everywhere; every puddle, every crack in the rocks held at least one. The waves washing in on the shore carried more. But none seemed to have any live animal with them; just the empty tubes.

The seagulls and crows weren't eating them.

They were about the same thickness as the torn-up roots of the eelgrass; I brought one home for comparison. 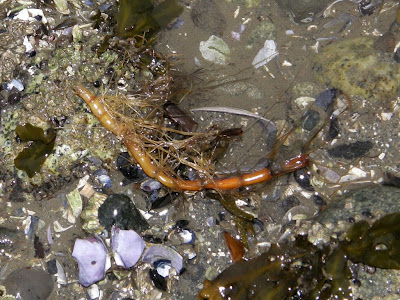 Eelgrass root.
At home, I emptied them into a bowl and examined the contents. Nothing but sand.

The tubes were paper-thin, white, semi-transparent. They had no segmentation, no markings, no fibers that I could see, even at 40x magnification. When they dried, they felt and looked like thin paper. The dried root stayed brown, was bumpy, stiff and hard. 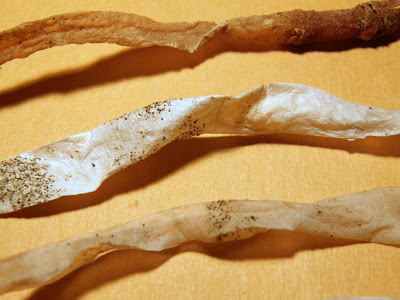 Dried tubes and eelgrass root.
I've been searching the web and my books, trying to identify them. I think -- I could very likely be wrong -- that they are probably the papery tubes of a Nemertean, a kind of marine worm.

These worms can be very long; one of the common ones around here, Tubulanus polymorphus, the orange ribbon worm, may stretch up to 3 metres. Tubulanus sexlineatus, a brown worm, averages about 20 cm, 8 inches, and may stretch up to 50. They are found from Alaska to California. Kozloff reports them in our area.

T. sexlineatus is a non-segmented worm, up to about 1.5 cm thick, that makes itself a papery tube described as delicate, long, white, transparent, parchment-like (Kozloff), open at both ends. Sounds about right.

"... specimens in captivity soon secrete new tubes around themselves."

So, obviously, they do leave their tubes to forage for food.

It is common, according to Kozloff, around floating docks and pilings. Like the pier at the end of the bay. The other worm, T. polymorphus, hangs out on rocky shores, like the one we were on. I couldn't find anything about tubes associated with it, however.

How these tubes all turned up, in such numbers and such large pieces, on the beach, I don't know. Were the worms killed by the influx of fresh water? Or were the tubes just ripped off their sites, leaving the worms to build new ones? How did the sand get inside?

The worms are the anteaters* of the marine world. They eat other worms, molluscs, small crustaceans, even barnacles**, catching them by everting a long, narrow, sometimes venomous proboscis to capture the prey and drag it back to the mouth. The proboscis could be almost half the length of the body.

*Reading this reminded me of Julie Zickefoose's blog post on anteaters.

** That makes two things that I know of now that prey on barnacles; the birds and the nemertean worms. And I thought they were unbeatable!

*** A good write-up on the creatures to be found on our shores is the Oregon Estuarine Invertebrates (pdf). 224 pages of detailed information.
.
.
Posted by Susannah Anderson at 11:52 pm