A couple of weeks ago, dragging out bags of potting soil from a corner of the patio, I surprised a pair of spiders. Fat, dark brown, glossy spiders, unlike the house spiders, cross spiders, and Tegenarias that I usually find. I captured one, and brought it inside. 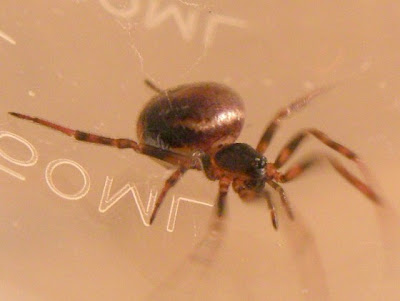 Brownie, in a plastic food container.
When she (skinny pedipalps identify her as female) climbed the side of the container, I got a look at the underside. She was marked with a sort of hourglass shape. 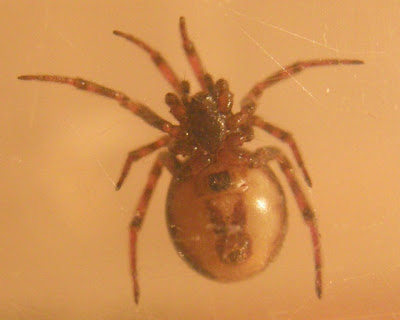 Black widow? Immature, because she isn't shiny black yet?

I know that black widows aren't supposed to live around here, but you never can tell; nor are Shy Cosmet moths, yet I found some. And it is late in the year to find immatures, but the climate is changing; it was mid-November, and my fuschias were still blooming. (Still are now, two weeks later.)

I had to be sure. I kept her lid on tight, and fed her moths and sowbugs. And eventually got around to sending her photo in to BugGuide. 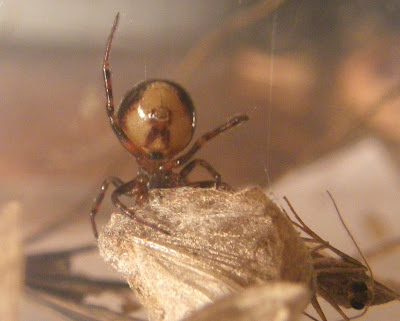 Brownie, with a couple of tied-up moths.
Half an hour later, I had an ID. Steatoda borealis, the Northern cobweb spider. Not dangerous. But they are often mistaken for widows, so I didn't feel quite so foolish. And I could let her go. But now she had a jar full of specially-bred fruit flies; may as well let her finish them off, first.

And then yesterday, there was another note from BugGuide; Rod Crawford, Curator of Arachnology at the Burke Museum in Seattle says she is not S. borealis, but Steatoda bipunctata. Two-spotted cobweb spider? I found no common name for her, but that will do. 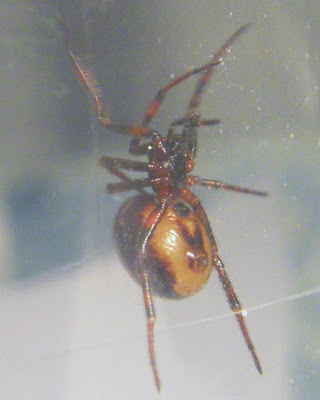 Steatoda bipunctata. Mistaken for borealis, mistaken for widow.
Rod Crawford says that she is "a rather recent introduction on the west coast." So I looked at the BugGuide map. Sure enough, they have sightings in Labrador and Ontario; nothing in BC until this one. Googling, I found pages of listings all over northern Europe, including the UK, but very few on this continent, and those all on the east coast. "Go west, young spider!"

S. bipunctata lives in close proximity to humans, often in sheds or basements, less frequently under bark in the forest. It makes a messy, tangled web, and hangs upside down either under the thick of it, or, as I've learned by watching "Brownie", a ways above. It eats mostly crawling insects, sowbugs and the like. It has been mentioned that ones kept in a laboratory and fed on fruit flies don't do too well. (So, either I let her go, or if I want to continue observing her habits, I find her some sowbugs.)

And they are short-sighted, discovering the presence of prey by the vibrations in the web. I saw this for myself: the first moth I introduced to Brownie's container didn't flutter, but simply walked around and around the edge. A couple of times, I saw the spider orient herself in the moth's general direction, but nothing came of it for a full day. I moved the container right beside a bright light, and woke up the sleeping moth; within a minute, Brownie had the moth tied up, and was dragging it off to the "dining room". She never had that problem with fluttery moths, whatever the lighting. 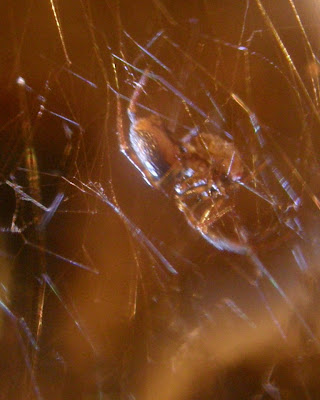 Brownie, in the middle of her messy web, eating a fruit fly.
One other thing; she isn't dangerous. (See Wikipedia: Steatoda) She probably won't bite, and if she does, it shouldn't be a problem. That's good to know.

And how to differentiate Steatoda from the widows? The belly of the widow is dark. It doesn't have the whitish line around the front of the upper abdomen. And the hourglass is always red. (Even when it doesn't look quite like an hourglass.)

.
Posted by Susannah Anderson at 1:26 am