Sweeping nudes and other mix-ups

Walking the Culture Crawl this year, I noticed a common way of seeing the world, expressed differently in each artist's work. Many take an object or a scene, possibly something simple and commonplace, and superimpose it on another, seemingly entirely unrelated. But through their careful blending or contrasting, an idea emerges, a relationship, an insight into the nature of things, an understanding that sneaks up on you and persuades without words.

Imagine, if you will, a bicyclist with a GPS unit on the handlebars. Now a field of flowers. Now a cosy shawl. Put them together.

Or a leaf. A dried, dead leaf, stripped down to the veins. Imagine a loom, threaded with vibrant colours. Now add a bit of history; Charles Babbage inventing a "Difference Engine".

Ruth Scheuing has done this. She creates awesome fabrics on her loom, finishes them on a computer-driven sewing machine. Let her tell you about one of her designs:

These lines were captured as tracks with a hand-held GPS. They represent simple daily activities, driving to work, shopping, visiting friends, walking around the neighborhood or riding a bike around the park. Some ordinary trips create interesting lines, while some beautiful journeys create tracks lacking visual interest. The emerging patterns anchor my memory and trace narratives with simple lines. With the absence, in most cases, of specific representational imagery, the simple line creates a memory track, The imagery used then represents more imaginary spaces, equally real representations of places and ideas, facilitated by the Internet and other tools of mediation.

... As in my earlier work I am still interested in the reconstruction of nature and a blurring of lines between global perspectives and domestic spaces and the use of tools or technologies within the traditions of the hand-made.

Here is a sampler of her GPS tracks: 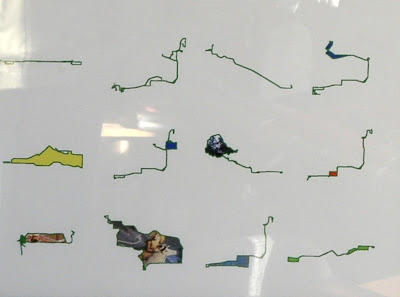 Our photo, with reflections of the setting; more layering.
What struck me first, entering her studio, were a series of hangings, tea-towel-sized linens, in grey and charcoal, each one depicting a geological structure or event; a dust storm in the Gobi Desert, a satellite map, an island, and so on. The "stuff" of our lives, as pervasive as washing dishes, but unnoticed unless it bothers us. Like the dishes do when we don't have a dishwasher.

(That's me; my take on the towels when I saw them. It ties in with her interest in "a blurring of lines between global perspectives and domestic spaces.")

Ruth was inspired by a quote from Ada Lovelace, one of Babbage's "programmers",

and looks for the relationship between patterns in "nature" and in our "designed nature" (as if it were not part of the whole). Here is the leaf and the Difference Engine: Compare it to an old print of Babbage's Engine: 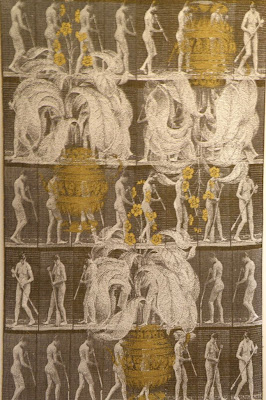 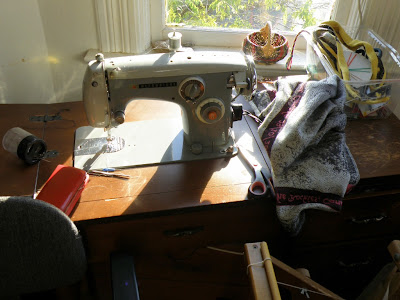 Ruth's sewing machine, in a sunny tower window.
Ruth's website has many more of her designs, and explanations for each new focus; it's well worth examining.
.
Posted by Susannah Anderson at 1:06 am