A couple of weeks ago, I had company: 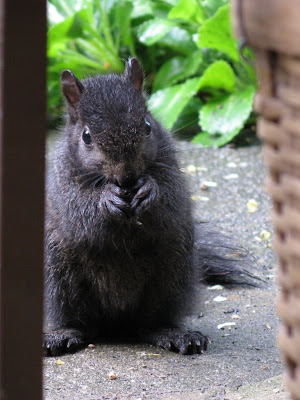 First, a squirrel kit, presumably one of Scruffy's. It was snuffling around my patio, looking for goodies. When it saw me inside the door, it scooted behind my supplies cart, and finished off its sunflower seed there, keeping a watchful eye on me through a gap.

I took a couple of photos and got out of range, so as not to ruin his meal. The next time I looked out, there were two of them. 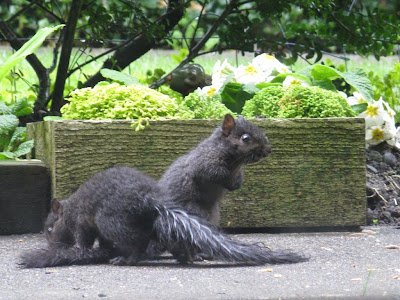 I opened the door, very slowly, reached out an arm and dropped a handful of seeds, hoping to entice them closer. They ran away, but were soon back; what squirrel can resist sunflower seeds? 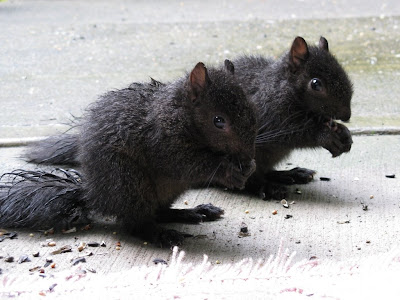 They ate the whole handful. First the more distant (relatively) seeds, then the not-quite-so-far ones. They came closer ... 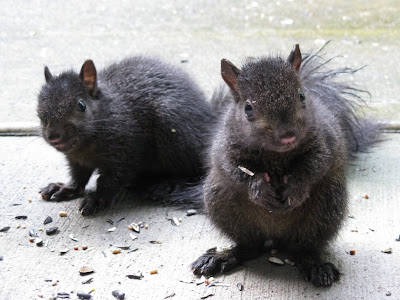 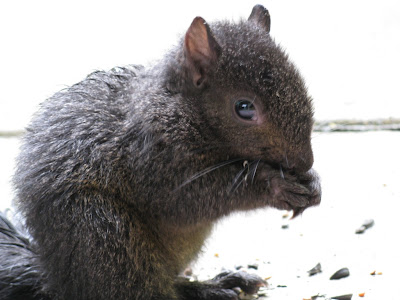 And inside, I crawled up to the door, one inch at a time, then eased it open until I could hold the camera outside, barely 18 inches away from the babies ... 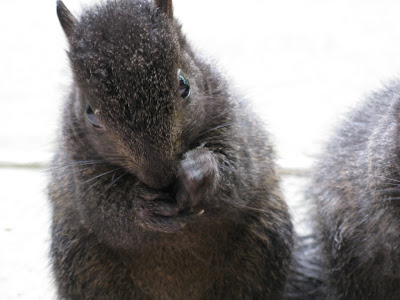 The first one I had seen was much more cautious, or more responsible; while Little Scruff ate and ate and ate, oblivious to me and my camera, Junior stood guard, eating whenever I wasn't moving.

Every so often, Junior would pick up a seed and Little Scruff would snatch it from him. Then they both squealed (tiny, squeaking cries I could barely hear) and tussled for a moment. Little Scruff always won these arguments.

They haven't been back, not when I was watching. But I have seen them at odd moments, running across the lawn; Laurie saw one in the church parking lot next door.

Today, at the end of the lawn, a crow was standing watching something under the rhododendrons, something moving erratically only a few crow steps away. I couldn't see what it was; there was just a blur.

From closer up, it looked to be about football-sized, but it was thrashing around so wildly that I couldn't get bearings on it. Bird captured by a rat and fighting? Snake and baby squirrel? Squirrel having a seizure? Poisoned squirrel? That last seemed entirely too possible. Whatever was going on, the presence of that crow hadn't worried the sufferer.

I came a bit closer. The crow left. The convulsions continued. Finally, a breather. A baby grey squirrel sat up, holding something brownish and limp. Then he attacked it again, writhing and biting. It reminded me now, of kittens at play. I went back for the camera. 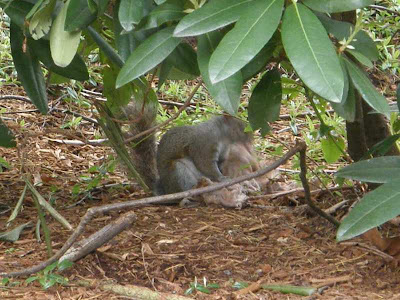 I snapped a photo, took one step, snapped another, took another step, ... Most of the photos were blurrier than this one. A kitten "killing" an old rag. 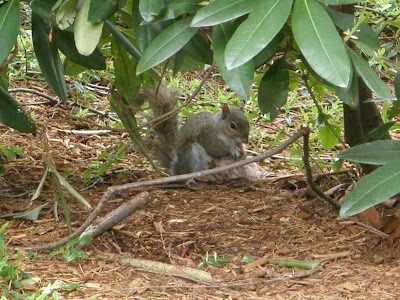 Another brief pause for breath. Then, back to the fray.

I got too close. The kit scampered off. And so did I.

When I came home in the evening, I looked for the rag. It was still there, a bit farther away from the rhodos. It is an old, ragged dishrag. Very dead.
.
Posted by Susannah Anderson at 2:31 am