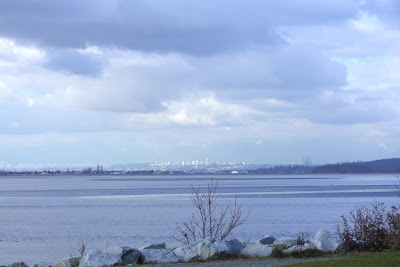 The tide was low, and we walked along the water line almost to the end of Blackie Spit. At a creek outlet, a heron was catching fish (2 while I watched), several crows were begging him, noisily, for scraps, and a mallard pair, side by side and rarely moving, lay head under in shallow water. Something tasty must have been in that creek mouth.

In deeper water, the divers were fishing. Buffleheads and Barrow's goldeneyes, dressed to the nines, and a solitary loon. On the spit, seagulls mobbed a lone walker, evidently with goodies in hand.

But there were others, lying doggo; out of sight.

As we approached the pier, I heard the pigeons coo-coo-cooing. There were none on the railings above, so I inspected the supports from underneath. 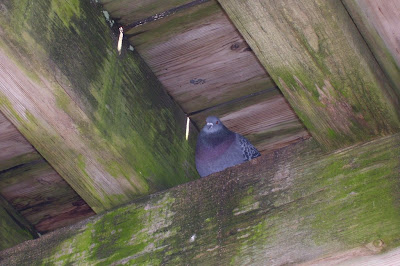 Perfect pigeon perches! Out of the rain and hidden from the eagles and hawks that patroll the spit. Each beam held at least one bird. And this one had a nest built: 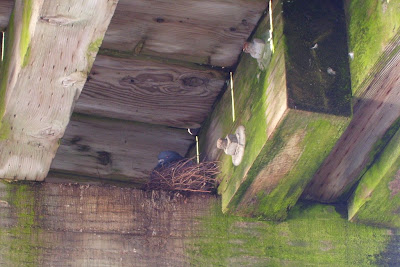 The water comes up pretty close to these beams; the pilings supporting them are encrusted with barnacles to about a foot below. It seems like a damp and awkward place for a land-based bird to raise young. 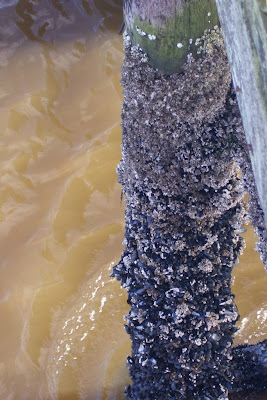 From the top of the pier: the board at the top is the edge of the deck.
Walking back to our parking spot, I admired the windblown, rugged shape of a tall evergreen; when we were close enough, I took a few photos. Here's the top half of one: 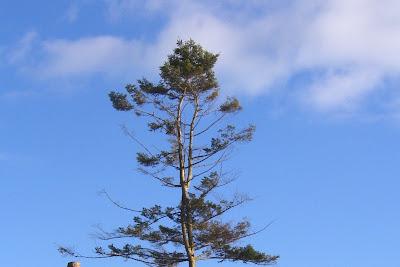 Click on it for the full size and examine it closely. Do you see anything but tree there?

We walked along, discussing the tree, for which I'm glad; I was still looking at it. And from a closer vantage point, the reason for the pigeon's choice of site was apparent: 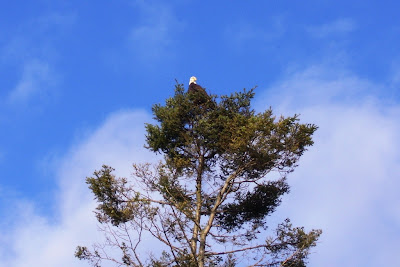 No, he didn't arrive there while we were walking. I tested, walking back and forth; only from a limited perspective was he visible at all.

How many more things did we miss, even on the lookout for them? I wonder.
Posted by Susannah Anderson at 1:26 am