The Case of the Reluctant Brides

In the couple of weeks since I bioblitzed the vacant lot across the street, Laurie and I have been keeping an eye on it as we passed by, watching it grow and bloom. Today, we went over to get a closer look.

The wild mustard is in full bloom, daisies (which I missed in the BB, not recognizing the seedlings) are ready to open, the Scotch broom is doing its thing. On one right by the edge of the lot, Laurie found this for me: 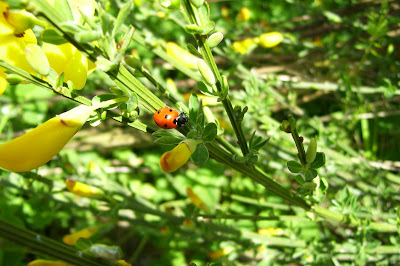 And a few steps farther along, a small rabbit hid under the blackberry canes, hoping to be invisible. 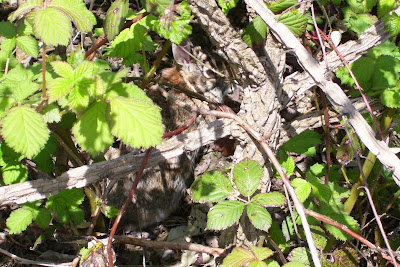 Birds sang and fluttered everywhere; sparrows of some sort, starlings, crows. And Laurie says he heard a red-winged blackbird. We scrambled over a few gravel piles fast turning into alder and blackberry bush, and down a shallow ditch, where kids had laid down solid boards for a path. Laurie shot a roll of film. Water, ooze, blackberries, young alders, sparrows, more blackberries. Still, it was pleasant down there, in the sunshine and out of sight and sound of the traffic.

We ended up at the small pond where I had found the water striders a week ago. It's just the remains of an old boggy creek, very shallow, only a dozen feet or so across. But very much alive: 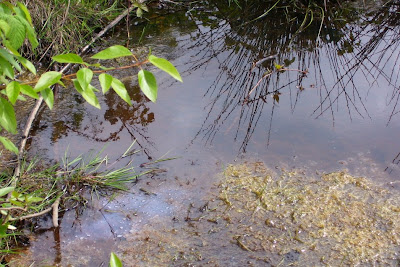 And yes, the water striders were there, half a dozen, at least. We watched them for a while before I realized that several of them were engaged in wild chases around the pond, two by two. I tried to aim the camera at them, but -- those guys are fast! It was hopeless.

I was tracking one couple when the chaser caught up with the chasee. And then, I was astounded. These two bugs started leaping together into the air. Down to the water surface, roiling it up, and up again, belly to belly. Again and again and again. At one point, their efforts took them a good 6 inches above the pond. Finally, they broke apart and went their separate ways.

Another couple ended their chase with a milder, shorter dance.

I got, I don't know by what luck, a couple of photos. Here is the first couple; you can see the ripples in the water surface marking the launching pad, the two striders above and their shadows below. Click on the photo to get a better view. 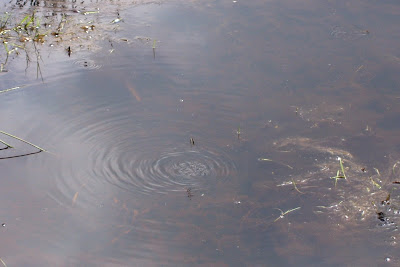 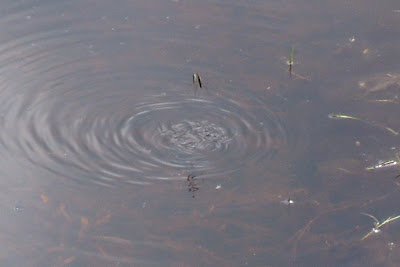 What was going on? They didn't seem to have been in a position for mating. Unless they were quicker than rabbits.

At home, I dug out my books and fired up Google.

Turns out that female water striders are reluctant to mate*. In fact, they only need to mate once in order to produce their broods. But the males want to mate frequently. Evidently, the last male to mate with a female is the one whose DNA gets passed on to the next generation.

So the males pursue the females, who flee, and then fight. Which is what we were watching.

From the Abstract of "The costs of mating and mate choice in water striders" by Locke Rowe, UBC, dep. zoology, Vancouver BC:

Mating behaviour in this species includes frequent harassment of females by males (mate searching), pre-mating struggles that may function as mate choice by females, mating which includes copulation and male mate guarding, and post-mating struggles. Each component of the mating behaviour of females increases predation risk. Escape by females from harassment by males increases the movement rate of females and predacious backswimmers are attracted to movement at the water surface. Capture success of backswimmers is almost tripled on females engaged in pre- and post-mating struggles relative to single females.

Males want to spread their genes far and wide and mate with as many females as possible. Females would rather keep mating to the minimum.

Male water striders have evolved grasping hooks that grip the female in place as he tries to mate with her. To foil the males, females have evolved spines to dislodge unwelcome lovers.

(most of article skipped)

That explains the "dances"; they were battles, with the female winning and the male giving up.

But none of the sites I found mentioned the intriguing leaps that make up this struggle.

*Abstract by Rowe's colleague, Goran Arnqvist, of the University of Uppsala in Sweden.

Wikipedia, with a good photo of a mating pair of water striders.
Posted by Susannah Anderson at 12:50 am