It's that time of year again; here in the north, the summer heat is dissipating, the rains are coming (YMMV). Back-to-school sale flyers are showing up in our mailboxes. And the rocks are beckoning!

It's time for the annual International Rock Flipping Day (IRFD), this year as usual, on the second Sunday of September, the 13th. 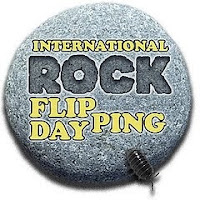 I love rock flipping day, in part because people find classes and even subphyla of critters that they've never encountered before. (Sara Rall, commenting after last year's RFD.)


No-one has volunteered to host it this year, so we're back here for another year.

I'm getting lazy: I'll post, again, the instructions and history as before.

Rock Flipping Day was started by Dave Bonta and Bev Wigney in 2007. The idea is simple; in Dave's words,


... we pick a day for everybody to go outside — go as far as you have to — and flip over a rock (or two, or three). We could bring our cameras and take photos, film, sketch, paint, or write descriptions of whatever we find. It could be fun for the whole family!

On 9/2/2007, people flipped rocks on four continents on sites ranging from mountaintops to urban centers to the floors of shallow seas. Rock-flippers found frogs, snakes, and invertebrates of every description, as well as fossils and other cool stuff.

If you're joining in for the first time, here's a quick rundown of the procedure.

A caution from Dave:

One thing I forgot to do in the initial post is to caution people about flipping rocks in poisonous snake or scorpion habitat. In that case, I’d suggest wearing gloves and/or using a pry bar — or simply finding somewhere else to do your flipping. Please do not disturb any known rattlesnake shelters if you don’t plan on replacing the rocks exactly as you found them. Timber rattlesnakes, like many other adult herps, are very site-loyal, and can die if their homes are destroyed. Also, don’t play with spiders. If you disturb an adjacent hornet nest (hey, it’s possible), run like hell. But be sure to have someone standing by to get it all on film!


About Respect and Consideration:

The animals we find under rocks are at home; they rest there, sleep there, raise their families there. Then we come along and take off the roof, so please remember to replace it carefully. Try not to squish the residents; move them aside if they're big enough; they'll run back as soon as their rock is back in place.


Last year, a total of 18 Rock Flippers posted their findings; a collection of four-, six-, eight-, and multi-legged critters. What will we find this year? Put it on your calendar, go flip some rocks, and we'll see!

Posted by Susannah Anderson at 3:12 am