Sarah, the barn owl, would greet visitors to her home, if only she weren't so drowsy. While we stood in an admiring circle around her, she opened her eyes briefly, then nodded off again.  An owl needs her beauty sleep! 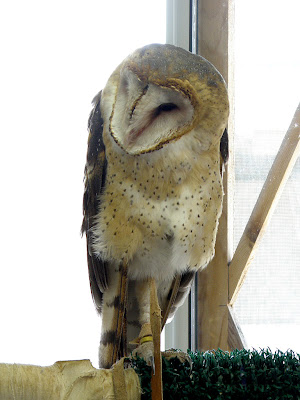 Sarah, off duty. She is an educator, working with children in the schoolroom.
We, Laurie and I and a couple with a young son, were in the office of O.W.L., the Orphaned WildLife Rehabilitation Society. Our guide, Rob, explained the operation of the society while Sarah slept on her perch by the window. Staff members and volunteers came and went, discussing schedules and the needs of their charges. A chart on the wall keeps track. 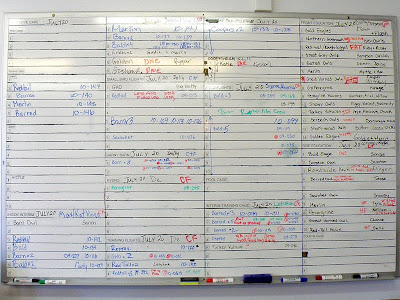 I counted 107 raptors presently on the site. The chart divides them into groups; 4 severely injured birds at present in Intensive Care,  some in interim cages, training cages, flight cages. There are flight training sessions in store for red-tailed hawks and a pair of great horned owls. Another section lists the birds soon to be released. The last column names the permanent residents; some are educators, trained for visits to schools and other field trips; the others are unable to be released because of some severe disability. These last are the ones we would be visiting. 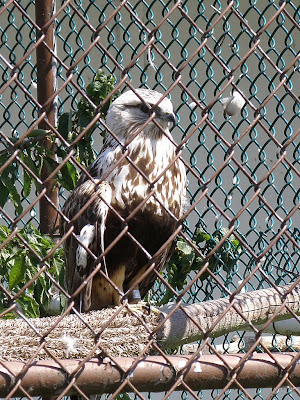 Rusty, rough-legged hawk. He was hit by a car and has a broken wing.
O.W.L. takes in injured raptors, mostly from the Lower Mainland, up to 200 per year. It has full medical facilities and a variety of recovery and training cages, and is building a pool cage, where eagles and osprey can recover their fishing skills before release. 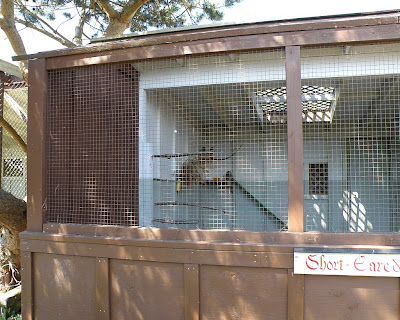 One of the outdoor cages, housing three short-eared owls. On hot, sunny days, the birds sit far back in the shade, making photography difficult. 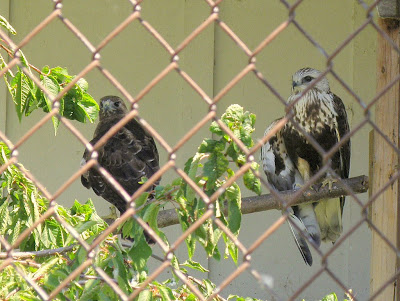 Gunther, Ariel, and Willow. Peregrine falcons. One has been shot; another has had part of a wing amputated. 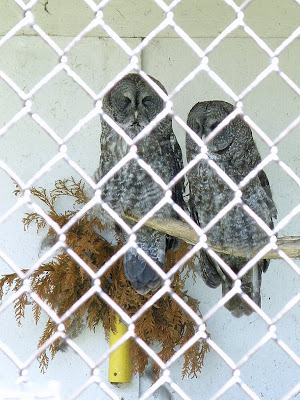 Sampson and Delilah. Great grey owls. Both hit by cars. Delilah has a blind eye. 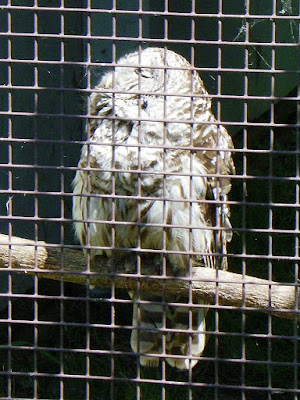 Demon. A barred owl. Hit a window in a high-rise building. Brain damaged.

He was called Demon because when he is upset, he flies at you with his head upside down, due to his lack of muscle control, a direct result of his injury. A lot of times he sits with his head at a kind of an odd angle and he has been known to fall off his perch because his lack of balance after falling asleep. We have to put his food on the same perch all the time or he cannot find it.

That makes me worry about the occasional sparrow or chickadee that hits my windows. 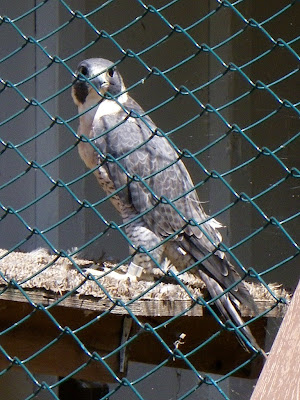 Mirage, a Gyr-Peregrine falcon cross. Bred for a falconer's bird, broke her wing and never recovered. 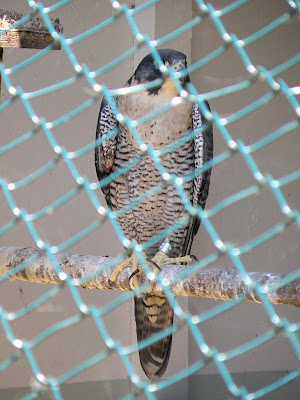 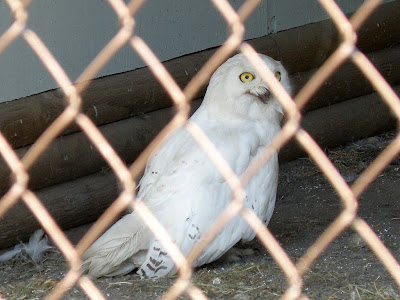 Either Kermit or Piggy, Snowy Owl. Both birds were hit by planes. I never saw a bird smile before! 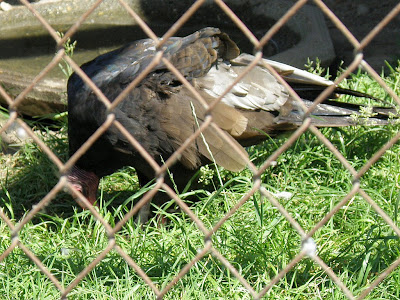 Turkey vulture, one of three, Pepe, Precious, and Chuck.

It is a daytime bird with a very keen sense of smell, sight and hearing which enables them to find food by sight and also smell food (parts per trillion) from great distances. Its digestive system has the unique ability to kill any virus or bacteria it ingests. This is apparent in its droppings as there is no sign of any type of disease.

I was glad to see the turkey vultures so close, but they moved around all the time, and we couldn't get a clear photo. Rob told us to notice their nostrils; the holes in the upper part of the beak. Unlike all other birds, these nostrils have no central "wall"; from the right angle, we could see daylight on the far side. This allows a better capture of the smell of rotting meat.
He also explained the bald head; the vulture often buries his head in the rotten carcass he's found. (On the road, as we saw up the Sunshine Coast, maybe.) If he had feathers, they would come out carrying a load of bacteria and maggots. The bald head dries quickly and sheds the offending critters. 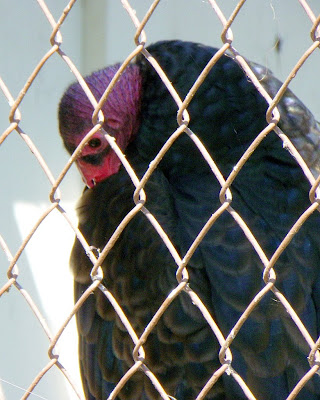 Turkey vulture, acting shy.
On our way out, in response to a question from the other couple, Rob mentioned that the BC government has cancelled their annual grant; O.W.L. is just one more of the environmental agencies that the provincial government has defunded, in their misguided "austerity" measures. They may have to shut down operations, after 25 years of caring for these beautiful birds.
"What will happen to the birds?" I asked. They will try to find adoptive homes for as many as possible, Rob says. Some will be released, as they are now when they are ready. And some, not able to survive on their own, will probably have to be euthanized.
But first, the society is trying to raise money from private individuals. There's a button on their home page for donations; if you can help, please do. 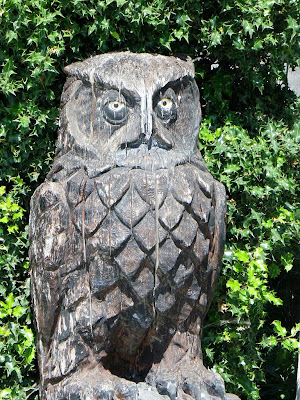 Wooden owl, guarding the entrance to the cages.
*Update: Larry, at the Birder's Report, has a post about a rehabilitation centre in California. Great photos, and more details about the operation of these organizations. Check it out.

Posted by Susannah Anderson at 3:48 am