Here I was, on vacation, wandering about on beaches looking at critters, all unprepared for serious work, and along comes Clare, from The House & other Arctic musings, to hook me with a meme. And a difficult one, too. And I'm a sucker for memes, so this afternoon, as we dug through tidepools, I kept thinking about his questions. I still don't know the answers, so I'm going to wing it.


Rules are simple, answer five questions posed by the tagger, create five of your own and tag five others.

Simple, he says!
1) You seem to have an intense curiosity of the natural world, how did that curiosity come about?


That one's easy, at least. Maybe. As far back as I can remember, I was always poking around, taking things apart to see how they worked, lying face down on the wharf to peer through the cracks and see what was swimming underneath, examining entrails of fish and clocks and flowers. "Stop daydreaming, Susie!" my teachers were always saying. I wasn't daydreaming; I was wondering what the world looked like from up there where the seagulls were flying.
But then, the question; how did that come about? I was always curious, but why? No idea. Got it from Mom, maybe. It's catching, I think.

2) What would you change about your home, your neighbourhood, your corner of the world? What one thing would you change to make it a better place?
I would call a moratorium on "development", which in my neighbourhood means destroying the farms and forests to pave them over and build houses far too big for their residents; resource-hoggers, energy-guzzlers. (Sure, they say they're "energy-efficient", because they have the latest heaters, etc., but why do they want to heat all that empty space? And why do they need parking for 5 or 6 cars? For one family?)
Especially, I would halt the Gateway project, which is a network of truck routes being built across the farmland of Delta, crossing Burns Bog (the largest domed peat bog in North America, and a stopover for over 200 species of migratory birds), and paving and/or polluting a major wildlife habitat, fouling our air and wiping out heritage sites.


(I keep deleting paragraphs here. Get me on the topic of Gateway, and I tend to rant.)

3) Describe your most profound encounter in the natural world?


Difficult. I keep thinking of another and another and yet another. "Most" profound? I don't know. That's like asking, "Which is the most important pillar under that bridge?" All of them.  I know that who I am is built on a lifetime of conversations with my cousins, human and non-human.
One little event stands out in my memory. I was about 13, living in a "town" of a dozen or so residents, on Nootka Island. One day, when we arrived in our schoolroom (one room, 4 students), we found a mouse there before us. A jumping mouse. It leapt from desk to desk, to the floor, back to a chair ... We caught it, and I took it home, put it in an old, leaky fish tank. I named it Pete.
Mom put up with Pete for a while, but eventually released him when we were at school.
A couple of weeks later, I was roaming around under the house, which was on pilings to keep it above the high tide line. And there was a mouse, running along a pipe. He saw me and came over, stood nose to nose with me, twitching his whiskers. And then turned slowly and walked back to a crack in the floor supports and vanished. A little thing, but I knew he was reassuring me; "Don't worry, I 'm fine."
Why do I remember this, after all these years? Maybe because this was the first time I realized that communication with wild things could go two ways.
4) If you could have a conversation with any person in history who would it be, and why that person?

Anton van Leeuwenhoek. I'd have to learn Dutch first, but it would be worth it. He was another intensely curious person, who developed a method for making powerful lenses, with which he examined everything he could get his hands on, eventually writing enthusiastically to the Royal Society of London to tell them of his discoveries. He was the first to discover micro-organisms. "Animalcules," he called them.
He scraped the plaque off his teeth, and examined it. Here's what he told the Royal Society:

“I then most always saw, with great wonder, that in the said matter there were many very little living animalcules, very prettily a-moving. The biggest sort had a very strong and swift motion, and shot through the water like a pike does through the water." (September 17, 1683)

I remember reading that when I was a kid. It has stayed with me since then.
5) What advice would you give to anyone wanting to better experience the natural world?
Slow down. Look again. Be quiet.
That's for starters. Then, learn as much as you can about what you've seen. The more you know, the more you are able to see. Even learning the names helps you to see. (There are spiders, just spiders, all the same; or there are jumping spiders, wolf spiders, cross spiders, and so on. Learn their names, and you become aware of the characteristics that distinguish them. The next time you see a spider, you'll notice the number of eyes or the shape of the abdomen, the pattern on the back.)
Then go back and look again. 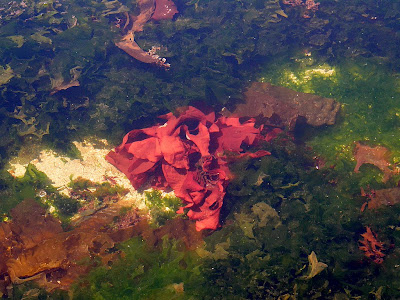 Underwater flower? Seaweeds, just below the lowest tide line.
Look again; there's a kelp crab in that red seaweed.
That's it for the first part of the meme. Now I have to tag five people and give them five new questions. I think I'll sleep on that. I'm on vacations, after all.
Posted by Susannah Anderson at 11:56 pm