Every so often, we find a Hooded Nudibranch, Melibe leonina, on the White Rock beach. Usually, they're dead, ripped out of their eelgrass beds by strong winds and waves. A live one turned up last week, swimming and hunting for food in a pool on the sandy flats. 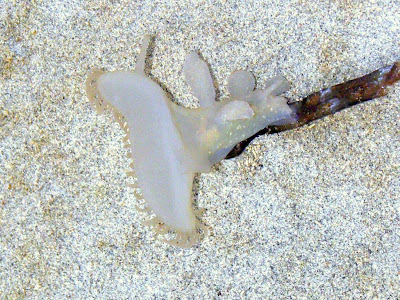 Hood open.
A nudibranch is a mollusk, a gastropod like snails and slugs. Like snails, the other sea slugs have a toothed radula, which they use to scrape and gnaw at their food. Melibe doesn't. She instead has this great hood, with tentacles taking the place of teeth; the tentacles serve to lock in the prey when the hood closes. (Think Venus fly-trap.) 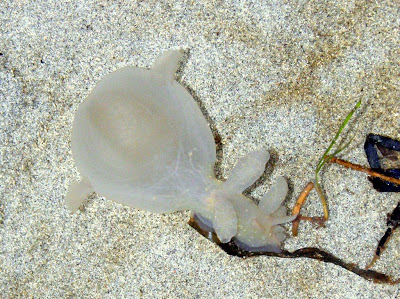 Hood closed.
Young Melibes still search for prey along the floor, like a snail does; they


"hold the hood out horizontally, just above the bottom, and gradually move along feeling, with the tentacles around the edge of the hood, for small prey." (Sea slug forum)

Adults fish for their food, waving the open hood around in the water, closing it to trap the goodies. This one was one of the larger ones, and while we watched, cast her* "net" and drew it in, over and over. 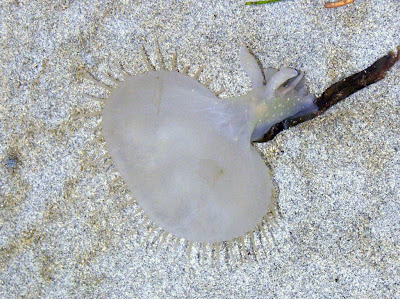 We didn't see her catch anything, and the pool looked empty, but the water here teems with tiny amphipods and copepods; we wouldn't have seen those, nor the many transparent larvae of other critters. 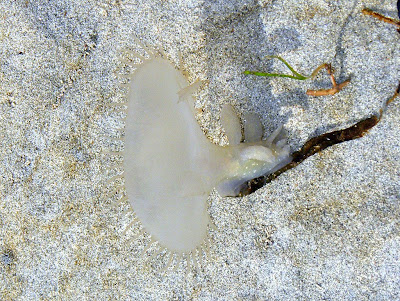 Hood open again. The sun came out briefly, casting a shadow almost more solid than the slug.
Melibe leonina is basically colourless. The colours we see come from the food she has been eating, in this case green things. She also eats nematocysts, the stinging cells of cnidarians, such as anemones and jellyfish. On her own, she has no protection against predators. And I know because I've watched it; crabs and hermits fight over pieces of Melibe. Anemones like them, too, getting a bit of their own back. So somehow she eats the anemones, stinging cells and all, without triggering the firing mechanism, then transports those nematocysts to her own cerata. 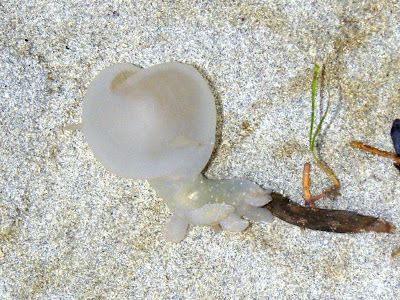 Closed again. The cerata at the other end look like fingers on a hand. But there are about 6 to 8, in all.
She has other tricks up her sleeve, too: the cerata are loosely attached. When she is threatened, she drops a few. (They grow back.) Hopefully, her attacker will take the easy morsel, and let her escape. If they make him sick, all the better. 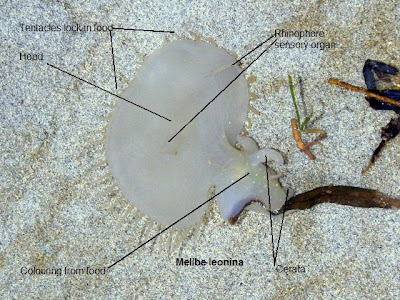 Hood open again.
Note the rhinophores ("nose bearers"); they're more visible in some of the first photos. They are sensory organs, capturing tastes and scents in the water, as well as currents. Food, enemies, and company (the nudibranch is a social critter); it's all done by the rhinophores and the tentacles around the hood. The nudibranch has no eyes.
*Most sea slugs are hermaphrodites, with both male and female characteristics. I use the feminine pronoun, "she"; I can't see calling an egg-layer, "he".
Posted by Susannah Anderson at 2:46 am