In a sprig of fir

Last week, Carol, of Black Jack's Carol, posted photos of a Short-Eared Owl in flight. It looked, to me, like a Douglas fir cone with wings and eyes attached, and I told Laurie about it. So when he went out this afternoon, he brought me back a Douglas fir branch tip with five cones on it. 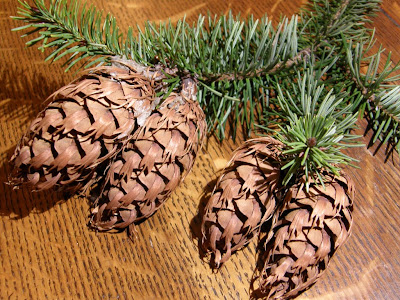 I think that right-hand one will make a good owl if I add paper wings and painted eyes.

"It probably has bugs on it," Laurie said. A bonus!

And yes, it did. I put the branch down on the kitchen table, and immediately little black dots popped out of it and started hopping. I ran for my bug containers. They were springtails, the tiny fat, purple-blotched globular springtails. Cute, but so tiny! The biggest one of that batch barely measured 1 1/2 millimetres. I had to use the microscope to get photos.

These two were interesting, if not exactly in focus. 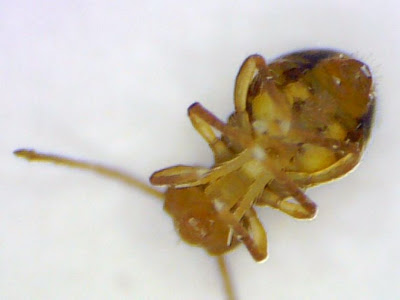 This little guy had lost his footing, and was struggling on his back. It gave me an opportunity to look at his jumping mechanism. See that long V structure along the belly? It is attached at the tail end.


"The main locomotor organ is a forked, tail-like structure (called a furcula) which is folded forward under the abdomen when the insect is at rest. The furcula is held in place by a clasp-like structure, called a tenaculum. When the tenaculum is released, the furcula thrusts downward and backward against the substrate, allowing the springtail to jump consider able distances." From U. of Nebraska.


And here the furcula is released and the springtail leaps. 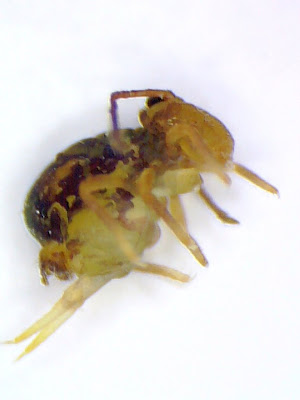 The crab spider hiding among the needles wasn't so anxious to be out and about; after all, her hunting method relies on being invisible. I had to tip her out with a paintbrush. 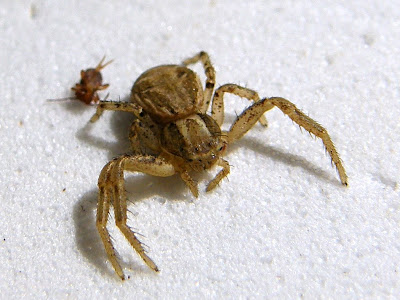 Xysticus, female. With a springtail for size comparison. She's about 4 mm. long.

Now she's in a cosy tin, with some springtails and a stray Indian meal moth in case she gets hungry. 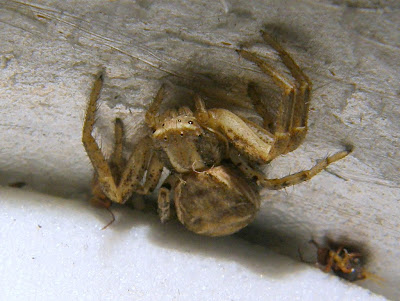 All eight eyes are visible here. One row in front, one on top.

Just before I put the branch outside (because springtails were still popcorning around it), I noticed a glimmer of amber. It moved when I touched it. 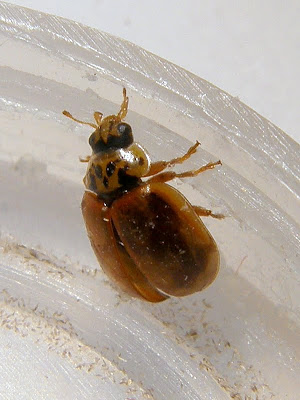 A ladybug, not hibernating. After all, it seems like spring, these days.

I had never seen one of these. It's a Mulsantina picta, the Painted Ladybeetle.

The photo doesn't do justice to its colouring; the richest of warm amber wing covers, and, with the light at the right angle, a bright yellow pronotum. The head is black, with a creamy yellow crown pattern between the eyes. Before I could coax it into a better light, the ladybug spread its wings and flew away. It's probably looking for aphids on one of my houseplants by now.

Posted by Susannah Anderson at 2:08 am