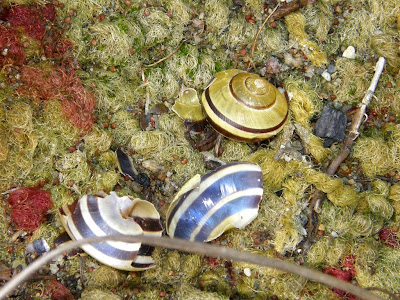 Leftover shells from bird breakfast. Not under a rock.
Rock Flipping Day 2009 is underway! Posts and photos are coming in, a few as early as Saturday morning, and we've got a great line-up of flippers waiting in the wings.
And there are prizes! Even not completely imaginary prizes! Cephalopodcast, the creator of the original IRFD badge, has made a Junior Award badge; if some of your crew of RockFlippers are under 7 or thereabouts, add this badge to your post. (It might be a good idea to print out copies for each kid, to stick on the fridge or hang on the door ...)

Badge, by cephalopodcast.com, under a Creative Commons license. Original, and other sizes, in Flickr IRFD pool.
And now, without more ado, let the show begin!
First up, in the early bird category:
Sunday:
Late entries:
As the rest of the posts come in, I will update the list. Refresh this page occasionally to see what's new. And don't forget to check the Flickr pool, as well.
.
Posted by Susannah Anderson at 1:17 am