The search. And the finding.

The Sunshine Coast, Day one, Leg three, mid-afternoon:
It was time to stop dawdling about and start the search for a place to spend the night. We had not booked accomodations, wanting to be free to change plans on the spur of the moment. So here's where we tested the practicality of the idea. Could we find lodging at the height of the tourist season, in prime tourist country? Or would we end up sleeping in the car in a pull-out?
Just past Half-Moon Bay, a sign read, "Secret Cove Resort;" the arrow pointed down the hill. Down we went. Down and down and down, very steeply. At the bottom, a gate, a half-built, half-occupied housing development, and a view. We parked. 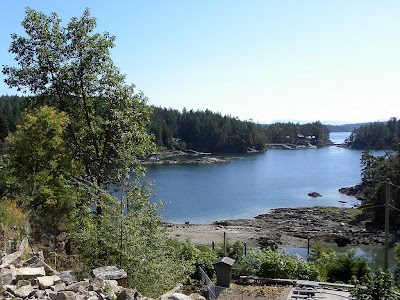 The Secret.
We walked down the rest of the road. At the bottom, a large building sported two signs: "Pub" and "Closed". It looked more abandoned than closed. 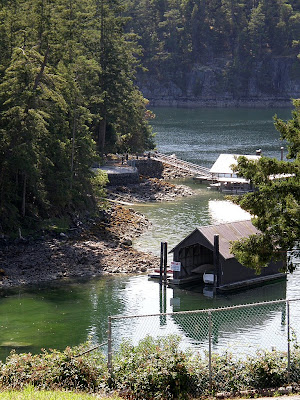 Boathouses in Secret Cove
(Looking this up on the web and Google maps, later, it seems that this is/was the site of an exclusive resort; if it is, it's gone bust.)
Back to the highway. It follows the coast for a ways, then turns inland, into the deep forest. Green, green, green. No motels.
Twenty minutes later, a signpost promised "Information." Just the thing! We turned down Madeira Park road, went around a bend and saw a riot of colour; flower gardens on both sides of the road, a tourist information booth in the centre of one. 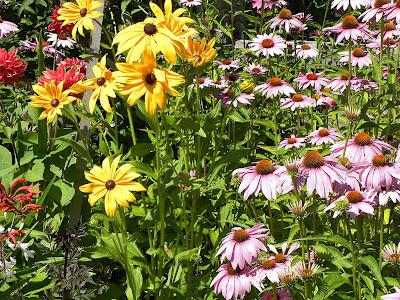 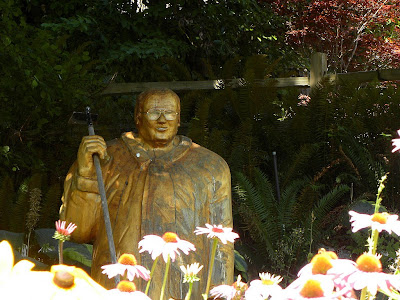 Behind a patch of daisies, this wooden gardener carried a hoe and bucket. Someone had recently provided him with glasses.
A friendly girl in the information booth told us of a resort nearby, on the shore. "It is a bit pricey, though," she said. Were there other places, more reasonable? She looked down her charts and mentioned one, also a resort, a few minutes drive down the highway.
"What's the price range there?"
She didn't know. Reasonable, she said. Ok, we'd try it.
First, the washroom. I came out to find Laurie taking photos of the wall outside, decorated with flowers with labels in two languages. English and Spanish, a rarity here. 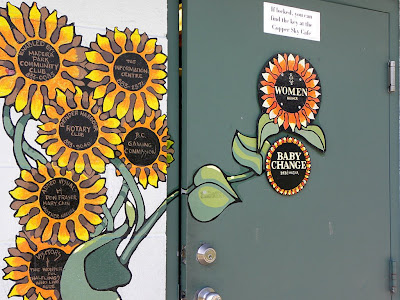 The art work was obviously done in two stages, by different artists. Four are named; Mary, Don, Walter, and Mother Nature. "Wonderful halflings," they call themselves.
Down the road, we found the resort. There was a room available; one only, smoking, and at twice the price we were prepared to pay. Back to the car and the highway, discouraged, hot, and a little tense by now.
And just a few curves more, and there it was: Stonewater Motel. With a beautiful sign, "NO VACANCY". And the owner was cheerful, the prices reasonable. Yay! Barely supper time, too! The plan worked! 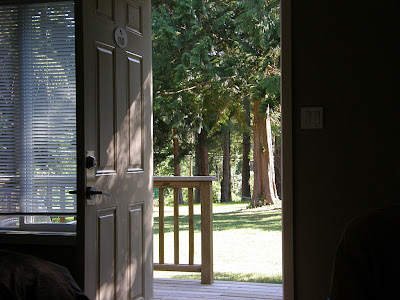 The motel is so new you expect the paint to be tacky still. Each unit has its own porch and opens onto a park-like yard. Inside, there's a fully-equipped kitchen, except for the lack of a microwave; we were able to cook and eat our own supper in comfort. If there's anything else missing, it's the eventual build-up of details; the can of Comet under the sink, the extra hook they will decide is needed in the washroom, the road maps in the drawer under the TV (instead of the fridge and stove instruction manuals there now). 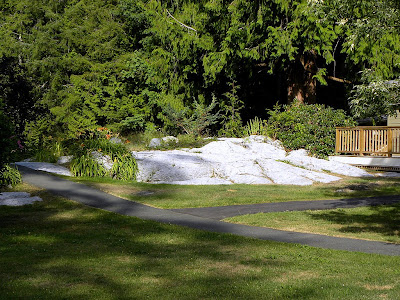 The bones of the peninsula; rock outcropping in the lawn. 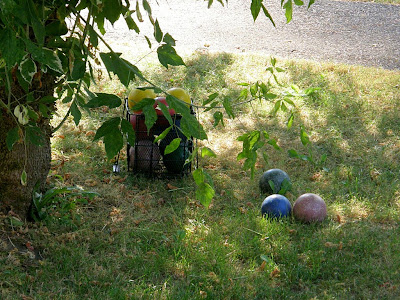 Ready for a good game. There's also a hammock for less active guests.
We came back here on our way home. In the morning, I brought a hose from the lawn and washed the car. Later, as we loaded the last items in the back seat, this little frog jumped in with them. He must have been basking in the wet shade underneath. I caught him in a wet towel I was planning to drape our cool water with. 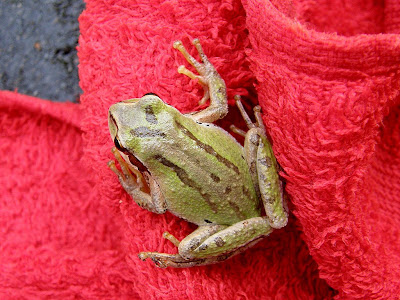 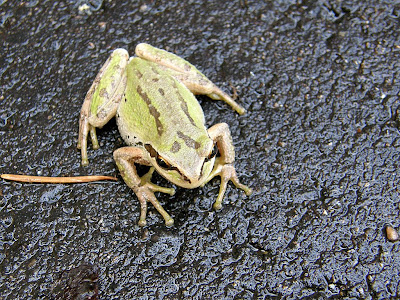 Cute, isn't he?
What else (and why I want to go back) we found at the Stonewater, next post.
.
Posted by Susannah Anderson at 10:25 pm