Coming home hot, footsore, and hungry after an afternoon downtown, I spotted this tiny weed in the neighbour's garden. I had to stop and take a quick photo. 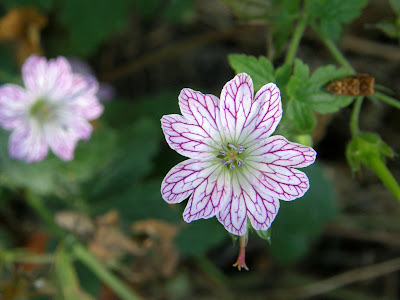 Unidentified flower.
It wasn't until much later, reviewing the day's photos after supper, that I noticed the little moth on a leaf on the upper right. The pattern was unfamiliar, so I grabbed a pill bottle and went back out. The moth was still there, on the same leaf as before. Here it is, under glass: 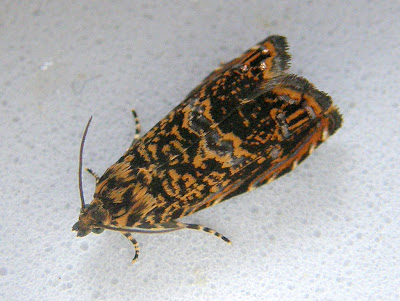 Unidentified moth.
It looks quite different in the evening light. Some of the yellowish areas (in full sunlight) now look grey. If you look at it from an angle, you can see that they are really silvery; they reflected the sunlight earlier in the afternoon.
The moth holds its antennae away from the body, angled up and out, like an antelope's antlers. And I love the orangey-striped legs.
Both sets of wings are neatly fringed. From the underside, both edgings are visible: 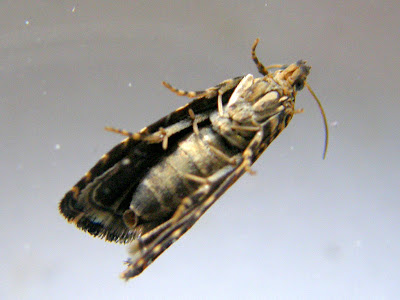 Unidentified moth belly.
I have never seen this moth before, and I couldn't find one to match, but it is similar to theAstronomer moth and other Olethreutes. I'll send it in to BugGuide tomorrow for a better ID.
.
Posted by Susannah Anderson at 11:49 pm