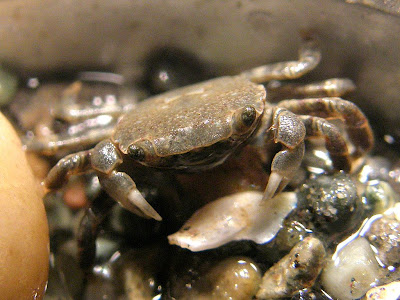 Smiley the crab
At Boundary Bay beach, I scooped up a couple of clamshells full of sand, hoping I had caught at least one of the worms that were in it. I dumped them in my little bottle, tipped out an adventurous crab, and filled it with water from the next wave.

At home, I spread the sand out in a bowl. Smiley, here, had come along for the ride. So had this black turban snail. 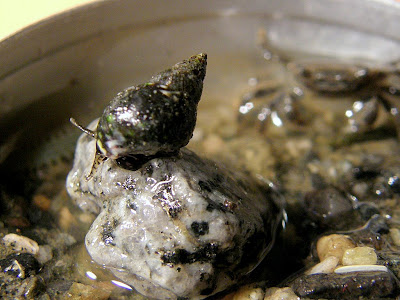 Black turban snail, 7 mm tall. Smiley in the background.
Unfortunately, we will not be going back to the beach for several days. I'm trying to keep them alive with homemade artificial seawater (sea salt with de-chlorinated water, at about 3 parts per 100), but Smiley's not doing too well. He stopped moving, and stuck his legs out at weird angles until I added lots of plain, unsalted water. The water on his beach, especially at the upper levels, must be heavily watered down with creek and rainwater.

Not that it matters; it's just a crab and a snail, out of billions. But that appealing smile!

Three turned up in the bottle of sand. Two of them were joined together at the head, and not happy about it; they were thrashing around, as if one were trying to shake free. 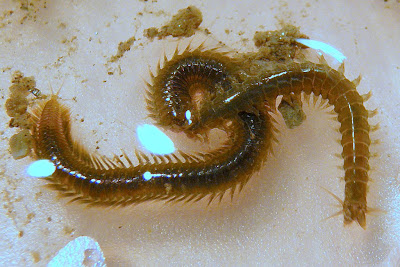 Unidentified polychaete worms
I wasn't sure what was happening; some kind of mating dance? Or predation? After a while, I managed to see enough to know they were different species. The segments were different shapes; so were the tails. So, predation it was.

Both were somewhere between red and green, depending on the light. The legs were green.

I couldn't see them clearly while they fought. With a needle and a paintbrush, I tried to separate them. It was difficult, and I finally managed only by injuring the long one. It bled, red blood.

Looking at them separately, now they were quiet, didn't reveal too much more information. The shorter, greener one has thicker, shorter legs (parapodia), and some kind of tentacles around the mouth end. I think I saw pale spines along its back.

I can't possibly identify either of them beyond the class level: the Polychaetes, or bristle worms. The Marine Life encyclopedia has photos of 79 different species, many very similar to these.

The other worm was thinner, and of variable length; while I watched, it stretched out from about 1 inch long to almost 3. It has a thicker head end, then a long body in a rainbow of colours; first blue, then red, then blue-black, then red, then pale blue, fading out to green at the tail. 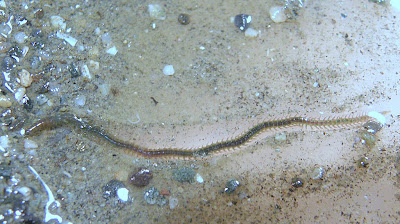 Another Polychaete.
According to the Encyclopedia, at least 836 species of polychaete worms had been discovered in the Pacific Northwest, 20 years ago. And more are being found all the time. It seems strange that these are the first I have actually seen. (Poop doesn't count. I've seen plenty of that.)