Zoo in the palm of my hand

The incoming tide brings with it organisms from deeper waters. I plucked a few samples of red seaweeds from the waves on Boundary Bay beach and brought them home for closer inspection. On one piece of Turkish towel, barely two inches long, I found a miniature zoo. 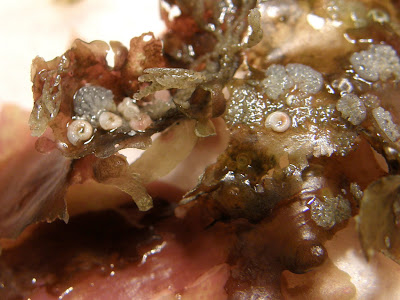 I could distinguish at least four different animals on this piece, maybe up to 6. (It's helpful, with all these photos, to look at them full-size; just right-click on the photo and open in a new tab.) Most apparent are the looped pinkish tubes. The whitish patches are little tubes, short and pudgy, or taller and slimmer, arranged in rows. There are twigs with tiny greenish spots, and near the bottom, a few tiny spirals. 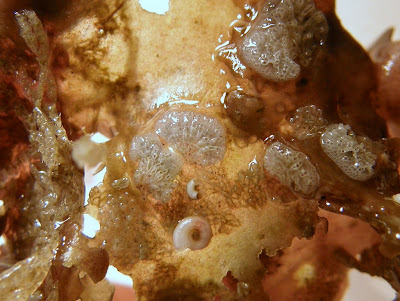 This is a closer view. Some of these tubes are arranged in a fan shape; they stand a bare millimetre or two above the leaf. A lacy pattern under them lies flat against the blade; still another species. 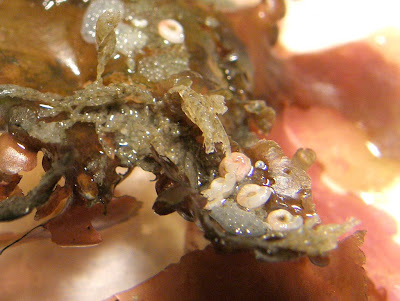 From a different angle; I was trying to get a decent look at those twigs. 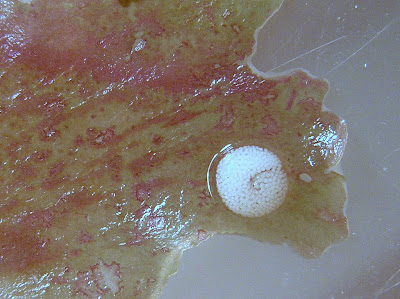 And on one tip of the seaweed, two of these little egg cases were glued.

The egg cases were tough, but soft. Everything else growing on the seaweed was as hard as a barnacle shell. I picked at them with a metal hook; not one broke or came away from the leaf. Even the twigs were made of hard shell.

After the seaweed had dried, I examined it again. The various shapes are easier to distinguish now, so I took another round of photos. 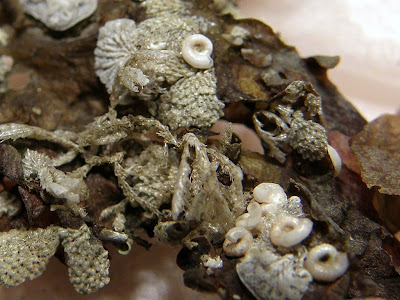 Coiled tubes, the twiggy things, bunches of "grapes", "glass" bubbles (under the coils) and straight tubes. 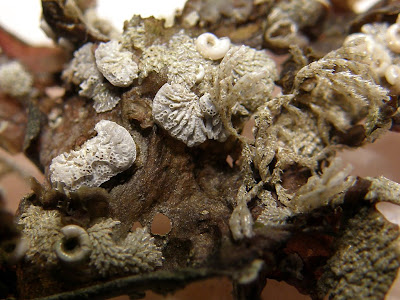 The fan-shaped arrangement of tubes is clearer here. 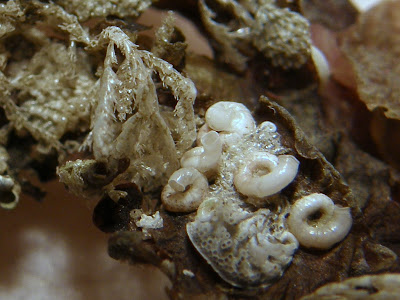 Another view of the "glass" bubbles and the twigs. 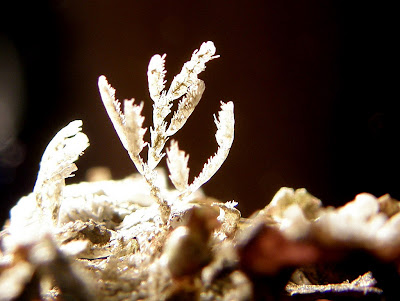 I pried one twig to an upright position (so delicate and tiny, yet it didn't break) and held it directly up to the light. The detail is washed out, but you can see how it's formed; each leaf is smooth on one side, curved in to cup a nest of spikes on the other. 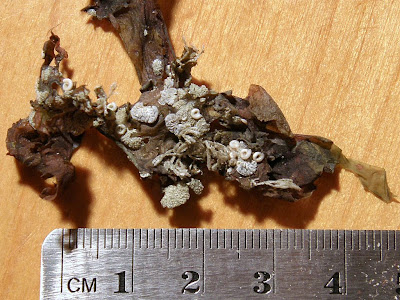 The whole zoo is less than 4 cm. long.
Some of these were fairly easy to identify. The leathery lemon donuts are snail eggs: I'd seen their photos before. A chink snail, Lacuna sp. The pink and white coils are the shells of Dwarf tubeworms, Spirobis.

As for the rest, I think they're Bryozoans. And these are fascinating animals, which deserve a whole post to themselves, so I'll leave them until tomorrow.

.
Posted by Susannah Anderson at 2:29 am