I like that word, Armadillidiidae. Step back and take a look at it. It kind of looks like a pillbug, on its back, with the legs waving in the air.

Digging through the mulch, checking to see if my perennials are starting up, I came across three shiny black balls. I collected them and brought them inside. On my desk, they immediately unrolled themselves and started running. Pillbugs. 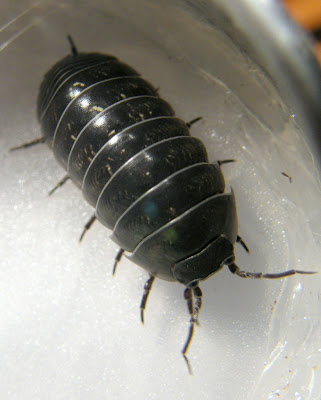 Armadillidium vulgare
I have at least two different species of their relatives, the sow bugs or woodlice, in my garden, but I hadn't seen these here before. Nor had I seen any, anywhere, so big. The largest of the three was well over 1/2 an inch long. The woodlice that I collect for my spider are half that, at most.

Woodlice (Oniscidea sp.) and pill bugs (Armadillidiidae sp.) are isopods (meaning same or equal feet), and look almost alike, but only the Armadillidiidae roll up into a ball. And the A. vulgare makes a nice, tight, perfectly spherical ball; not all Armadillididae do. (Sorry. I just like that word.) 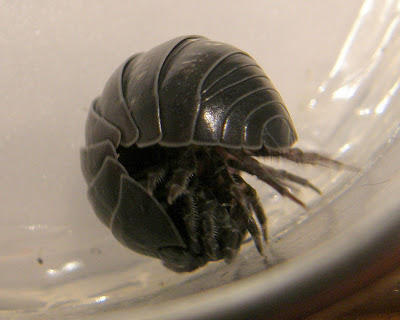 Unrolling.
These guys ran fast, and pushed aside even plastic lids meant to contain them. They're like little tanks. I photographed this one inside a jewelry tin that I have fixed up with a non-slip bottom. 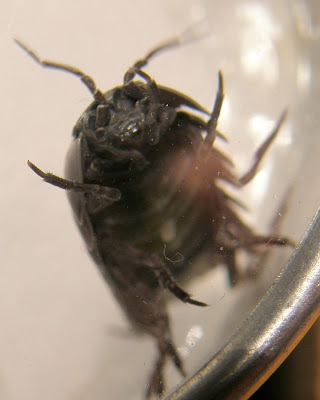 Trying to escape.
It has two long antennae, and two short, stubby ones that you can see in this photo. The eyes are behind these and to the sides. 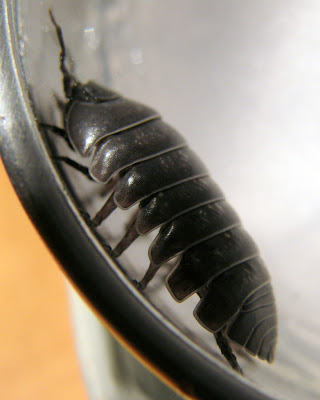 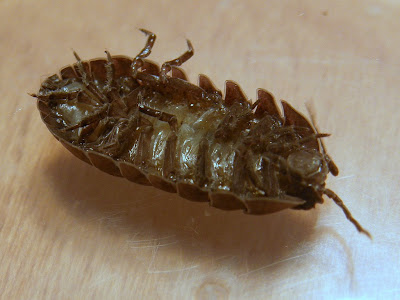 On its back, legs waving.
I finally put them into the spider's bottle. She tried to tie them up, but they kept breaking her web; too sturdy, too well protected. Eventually, they died, probably because it's too dry in there. They need moisture to be able to breathe.

The next ones I find go back to the garden after a brief, damp photo session.

.
Posted by Susannah Anderson at 1:21 am