I may as well relate this chronologically. We had supper (Indian food, from Corner Tandoori on "The Drive"; Butter Chicken - mmmmm!), then watched a video. A bit after midnight, since it was just barely sprinkling, we went out for a long walk around Strathcona. The streets were quiet, most of the windows darkened. Not these: 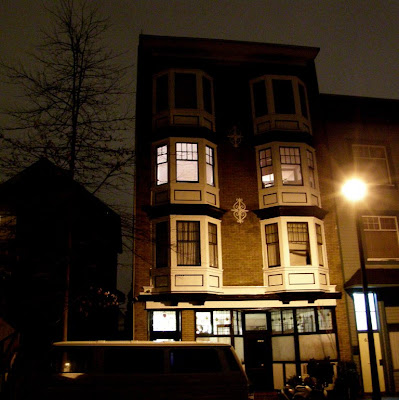 Tuesday morning turned out to be drizzly and cold. I lazed around, while everyone else dashed off and back. Nice. In the afternoon, we drove down to the new Save-on-Foods in the mess that is Cambie Street these days. On the way, I took a few photos out the car window: 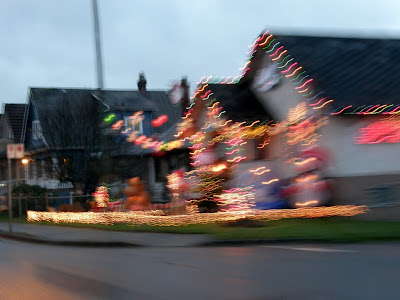 Christmas decorations, with a twist.
The car was moving, and the street bumpy. I think the house looks better this way than in "real life".

I hadn't seen this mini-building, on the very edge of Chinatown, before. 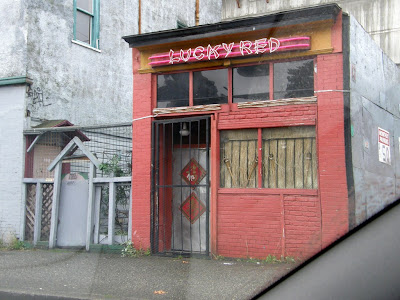 Lucky Red Gallery
I looked it up, once I got home. It is a fairly new (2006) Tiki gallery, in what was once a one-car garage. I found some good photos on Flickr, taken while the paint was still new. (And not through a car window on a rainy day.)

On the way home, too late and stuck in rush-hour traffic, I ... but wait, let me backtrack. Some years ago, I was living in a view apartment in east Burnaby, on the 12th floor, looking west. The view was stunning, especially in the sunset hours; I made sure my desk faced the window, so I could watch.

After some time there, I began to notice the crows. They were always around, but each evening, starting precisely at 4:00, a stream of them flowed over my window, heading northwest. They flew fast and far, until they were mere flecks against the sky. I checked their direction and the landmarks on the map. They seemed to be heading in the direction of Still Creek, near Burnaby Lake. I couldn't make out any beyond this point, even with binoculars.

Several times, I tried to count them, just the ones directly overhead; usually, I could count well over 100.

Back to yesterday afternoon. While I waited in Vancouver for the traffic to inch forward another half car length, I noticed, along the railings of the SkyTrain, a line-up of crows: 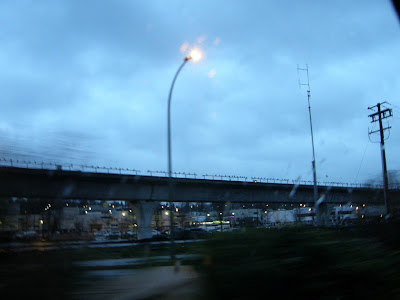 The row continued on the far side of the station, as far as I was able to see. 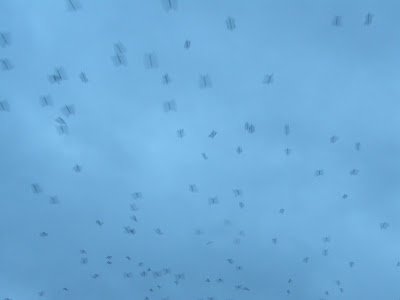 I took a dozen or so photos. With the rain and the dusk, the camera used a slow shutter, so the wings become a mere blur. The crows look like a swarm of gnats.

The crows flew overhead steadily, wave after wave of them, hundreds upon hundreds, all going east. When we (cars and crows) reached the Still Creek area, the sky cleared. None left but a few sentinels in a tree. 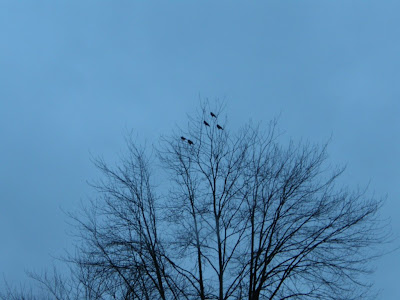 One of these days, I must contrive to be in the vicinity of Still Creek around 4 PM, to watch them streaming in, see where they spend their nights. Every tree and rooftop must be blanketed in black feathers.
.
Posted by Susannah Anderson at 1:11 am