Bugs in the alley

Post # 4 about the 2008 Eastside Culture Crawl. Previous posts: Crawling at the Wilder Snail, Sweeping nudes and other mix-ups, and Scrambled Birds.

Nadia Baker is a biologist by day and an artist by night. She creates prints, mainly in black and white, with the occasional touch of red or blue; ears, maybe, or antennae.

She is intrigued by the forgotten machines of urban life; those awkward-looking electrical transformers atop old power poles, the tangles of pipes and apparatus hidden in the weeds alongside buildings. They "call to me," she says.

And she transforms the transformers. She brings them to life, discovers those ears, some eyes and mouths (and arms, too) , gives them personality. (Click here to see a pair of transformers in love.)

Laurie took this photo, an aquatint hanging on the wall of her display in a back-alley garage: 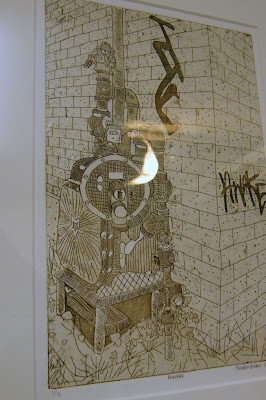 The afore-mentioned tangle of pipes. Better copy (Nadia's) here.
I was smitten by the prints inspired by her daytime incarnation: the biologist. 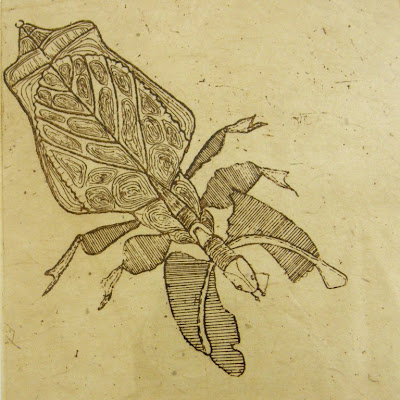 Phyllium siccifolium, etching
Yes, she labelled it with its Latin name. I looked it up, later. I found it on Wikipedia. In German, which I couldn't read. From other links, I learned that it is a Phasmid or a leaf insect, also called Linnaeus' Leaf Bug, and is found in West Malaysia. And that it is often sold as a pet. It eats blackberry and salmonberry leaves. Luckily, they need a warm climate, or an escaped female could devastate our coastal shrubbery. 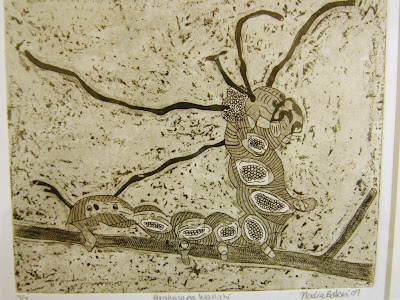 Brahmaea wallichi, aquatint
This one is the larva of a moth, the Owl Moth, which can be found from Japan to Africa. I couldn't find a photo of the larvae. That face looks contrived; such a surprised, worried expression! Does Nadia indulge in "imaginative interpretation" with her invertebrates, too? (Maybe not, or if she does, I'm prone to the same habit.)
.
Posted by Susannah Anderson at 12:57 am