My desk faces the window. Often I look up from what I'm doing, and reach for the camera; the birds are doing something. In the evening, when work and play is done for the day, we sit again, facing the window, or on the patio. We get in a fair bit of birdwatching. No life list entries, no exotic species, just our everyday lbbs. 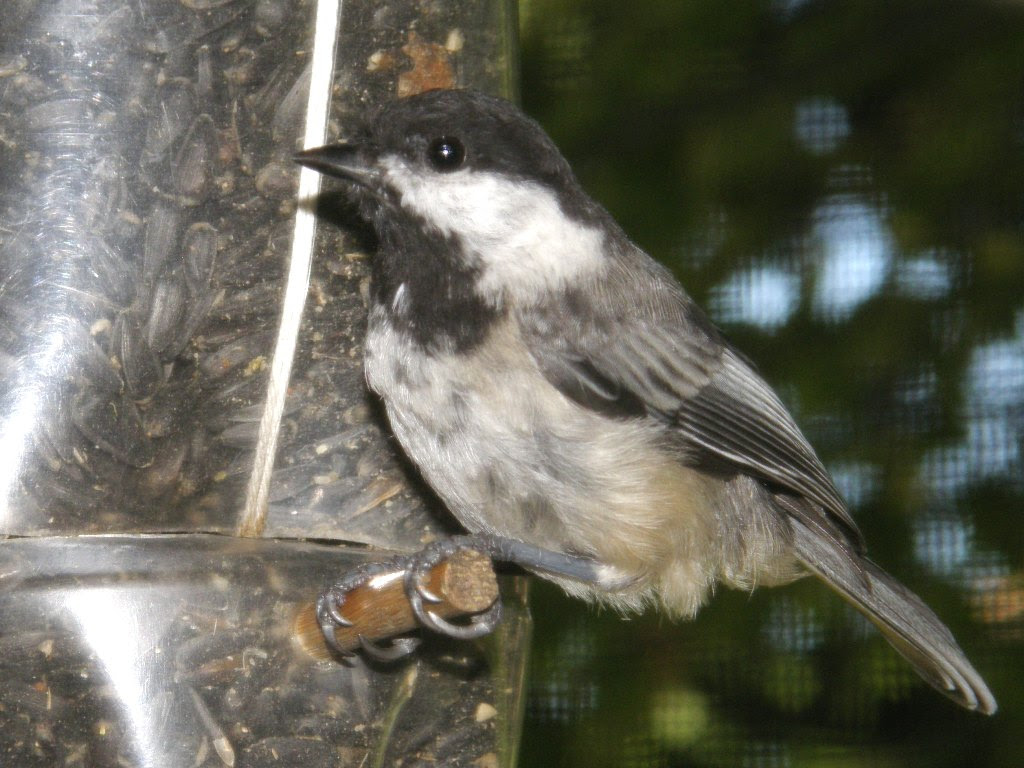 Chickadee, on the other side of the screen.
The current residents of my garden are a family or two of chickadees, another of white-crowned sparrows, some twenty-odd other sparrows, house finches, a couple of nuthatches, robins and the occasional crow. And I've been paying attention to their flight styles. 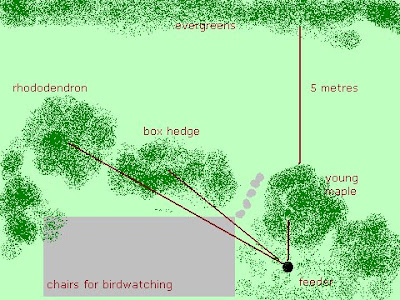 This is the relevant part of my yard, the spot where we sit to watch the birds. The chickadees, the finches, and the nutchatches use the hanging feeder. The sparrows come down to the paved area to get seeds. The robins and crows stick to the lawn area. And all but the robins and crows use the bird bath, also on the paved area, and dry themselves off in the rhododendron.

When they fly the longer distance, they dip and rise in the air, about once every metre, as if they were swinging from a series of vines, Tarzan-style. Even against a strong light, and at a distance, they are identifiable by this bumpy ride.

For short hops, like from the maple to the feeder, they fly direct, with the barest hint of a dip and rise. Between branches, they jump, barely opening their wings.

The nuthatch is much more business-like; he flies like an arrow, straight from the evergreens to the feeder, gets his seed quickly and zips back into the depths of the trees, also in a straight line, without a pause. He is travelling fast. I have never seen one take his time, or stay to talk with another nuthatch.

A couple of years ago, Laurie and I watched a pair near Chase. We noticed that they never go back in the same direction that they came in, and that they always disappear into a different tree than the previous time. We were guessing that this behaviour may help disguise their nest holes, or their stashes of seeds.

The house finches fly from the evergreens to the maple or to the rhododendron, following a more or less straight line. From there, they proceed to the feeder, stay on its perch for a while, then head back to the evergreens. There, they perch on an outside branch to survey the area, then flit back into the trees and out of sight. For bathing, they flit from branch to branch in the rhodo, checking out the availability of the bath, before dropping down.

The sparrows drift in, together, like leaves blown by the wind, angling down towards the lawn, and skittering along a bit after they've landed. Then they fly in short, quick flights, in towards the pavement and the bird bath. On the ground, they hop from place to place, back and forth, hop-peck, hop-peck, hop-peck. When they're done, they blow away together again. (When starlings appear, they behave similarly, except that there are a lot more of them, and they don't come close to the house, or bathe.)

I don't remember seeing the robins fly. They land somewhere out of sight, then run along the lawn. Eventually, they run back out of sight; soon afterwards, I'll see one on the topmost branch of the highest of the evergreens. 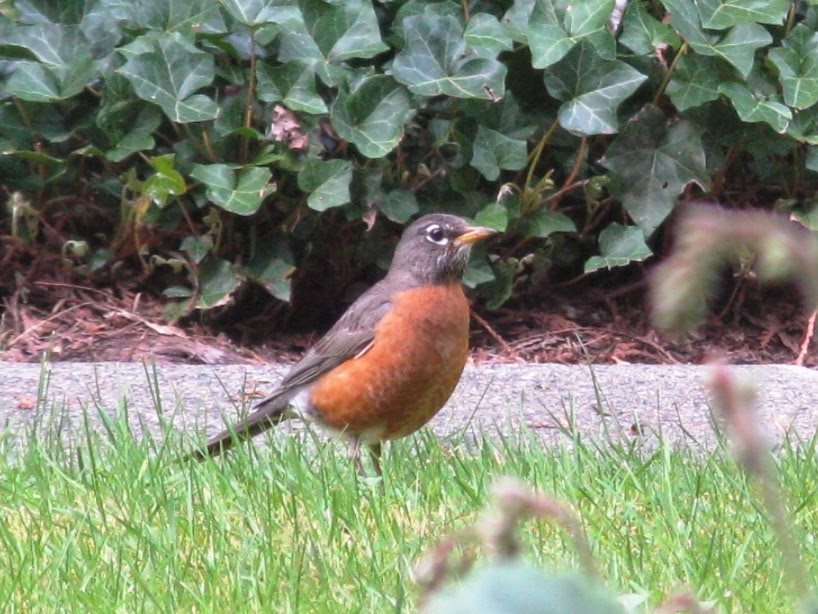 Robin, stopping to listen for worms.
Crows come in for an awkward landing on the lawn, usually squawking noisily as they come. They hop around for a minute scoping out the territory, see that there's nothing to scavenge, and leave.

And somewhere under the evergreens, a pair of flickers lurk. We rarely see them, but they call to us in the evenings.
.
Posted by Susannah Anderson at 6:45 pm