Hi! And welcome to our "Beginning of the Season – Victoria Day – It's Not Raining Day" Garden Party and Potluck! Glad you could make it! Come on in, join the fun; there are tons of people here already, birders all!

(Yes, I know Victoria Day was last week, but everybody was at the park or watching the parade then; besides, you were busy, weren't you?) So I'll just show you where you can leave your jacket, … in here … and then we can go out back and I'll show you around, introduce a few of the people. ... Ready? Out this side door, then. We just follow this little trail under the trees for a bit.

Oh, look, here's Island, scoping out a Red Breasted Nuthatch nest; Hi, Island! Beautiful bird! But we'll tiptoe on past and leave you to your photography. See you at supper later!

Out of the trees, and here's the garden. A bit on the wild side, but an excellent birding spot. On this side, there's a tiny creek and a bit of a pond. And there's the Ridger from The Greenbelt, photographing May birds; look at those cute goslings!

Up against the house, here on the patio, are the edibles. Buffet over here … bar over there … at the far corner, the BBQs. Lots of comfortable chairs. And Rob, resting after a good hike. Stop by in a bit, and he'll tell you an exciting tale of a trip in Yellowstone Park. Ospreys, Sandhill cranes, a wolf hunt, and … but I'll let him tell it.

And here's Duncan, discussing the intelligence of ravens, and the origins of the saying, Stone the crows!. Hey, Duncan, if you'd been dive-bombed by crows because you were supposedly invading their territory, you might think that was a good idea. But they are smart, I'll give you that.

At the bottom of the garden, standing by the rhododendrons, that's Hugh, of Rock, Paper, Lizard. He's probably listening to the birds. The other day, he was asking, Who's singing at the park? What bird says, "cow-cow-cow-cowp"? I didn't know. Now I do.

Ok, what else? Over there, down that trail, is the staircase to the beach, 'way below us. I saw Cis heading down a while ago; it's a long haul, but she's quite the walker. Ask her, when she gets back, to show you her photos of a pair of Gray Jays.

And now, the house. Did I tell you about the house? No? I hardly know what to say; I was flabbergasted when the lawyer told me about it. I just inherited it from my uncle, Professor (and mad scientist, really) Merlin J. Featherbottomley. It's a moldering ruin, mostly; he's been living here alone for over 50 years. But we've managed to clean and refinish the lower floor, so if (or I should say, when) it rains, we'll have shelter. It's basically empty; we'd have to bring the outside chairs in.

Come on in, through the patio doors; I'll show you.

Well, here's Amila, of Gallicissa! I wondered where he'd got to. Oh, you're setting up your photos along the wall there! Good idea! What colours! What names! And you've labelled the display: Birds in my local patch. Certainly exotic for us, though.

And the rest of you; now I see what you're doing! You're turning the room into a gallery of bird photos. Oh, marvellous!

Let's see, here are Troy and Martha, with tips on ID'ing Short-billed dowitchers. Very useful. And Liza with a bird report from Albion trip, complete with a bird-watching seal. And this is Pam, of Tortoise Trail, with a Yellow-eyed Junco on Mt. Lemmon. Great photos; and such a nice idea, putting them up like that!

We'll be back to look at the rest of the photos in a minute or two, but first, let me show you… down this hall, this is Uncle Merl's old laboratory. We've left his workbenches in place; they were pretty solid still. Oh, hi, Zen! Already hard at work? What are you doing?

Oh, I get it. Testing the effect of a hammer hitting a tree at 13mph. Better a hammer head than a bird head, anyhow. Unless that bird is a woodpecker, eh?

Uncle Merl was studying seagulls here; he was certain that they were extremely intelligent, and he spent a lifetime trying to teach them to nest in "proper" boxes so that he could observe their care of the chicks. Not much luck, I'm afraid. I don't think they were interested. 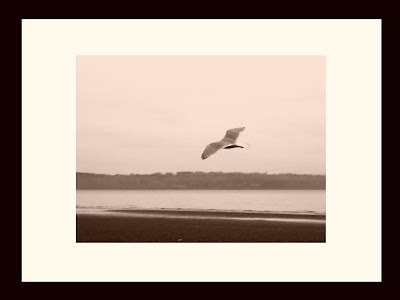 One of Uncle Merl's photos

That reminds me; Seabrooke had photos of Barn Swallows building their nest; I wonder if she brought them along? What, Zen? Around the corner in the study? Oh, thanks! And here she is; look! Seabrooke's photo series, A mouthful of mud!

And this is Adrian from the Bird Ecology Study Group putting up photos of hard-working Black-naped Monarch parents incubating, feeding and … potty training?

I see, you guys are setting up a bird-nest exhibition! Oh, this is great!

And over here by the window, this is Max. Hi, Max! Still not raining! We might just get used to it. What do you have here under Spring Emergences? A humming-bird nest? And flocking starling nestlings! (You know, I think they're a beautiful bird! Beautiful the way purple loosestrife is beautiful. Or Japanese knotweed.)

Look, Snail brings us an edifice that dwarfs all other bird structures. And, yes, I believe you, Snail, but … but … are you sure? Your Orange-footed renovators really do that? Wow!

Uncle Merl would have liked this one: Burrowing Owls - Will They Survive In North America?. Larry tells of buried nest boxes. For birds that live in burrows, of course.

We seem to be missing one of our guests; let's leave these people to their work, and see if we can find him.

Back to the hallway again; there's the foyer where you came in, the walk-in closet, the side door, the washrooms, the kitchen. That's about it. Oh, the stairs? We haven't refinished up there, yet; it's just a bunch of empty rooms. Come to think of it, though, I saw PetMonologues going upstairs with a flock of birds and a camera; he said something about doing a video for Sex and the Single Bird. "Birds do it", he said.

Oh, and I'd totally forgotten Greg. He's probably still in here, in the sound-proofed room where Uncle Merl analyzed seagull mating calls. Let's see ... Still working, Greg? Good for you, but it's party time! Come on out and get a drink before supper!

Greg's reporting on enigmatic sex ratios in a nearly extinct bird, the Magenta Petrels. I hope they can bring them back from the brink.

Anyhow, I'm looking for N8, of The Drinking Bird; he has a report on a pelagic outing, Slippery when wet. Poor guy, he gets so terribly seasick. And he got drenched, as well. All in a good day's birding, though! Oh, there he is, down on the landing, looking at the water. Come on, we'll get you a drink on the way … what'll you have? … and he can tell you about the Storm-petrels. 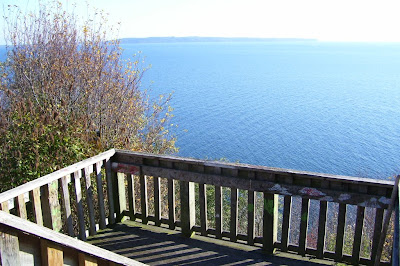 The landing, looking out to sea

And I've got to run; I hear another car in the driveway. It's probably Charlie, just in from his South Africa trip. He's bringing photos from the Zaagkiuldrift gravel road, the road to Kgomo-kgomo. I bet I pronounced that wrong.

So I'll leave you to your own devices now. Make yourself at home!

Hey, I almost forgot; this travelling house party and potluck will be over at Great Auk - or Greatest Auk? in two weeks, the 12th of June. If you have some goodies to bring, give Carrie a shout at labenc AT gmail DOT com by the 10th.
.
Posted by Susannah Anderson at 1:47 pm

Email ThisBlogThis!Share to TwitterShare to FacebookShare to Pinterest
Labels: backyard birding, birding, birds, I and the Bird, nests, party, travel