"Who cooks for you? Who cooks for you all?" Someone hidden in a dark stand of evergreens really wanted to know. A barred owl! And maybe, with the voice to guide us, we could find it.

We followed the sound, slowly, stopping often to get a bearing on the call. We were about to give up, when we saw the two owlets, sitting silently far above our heads. 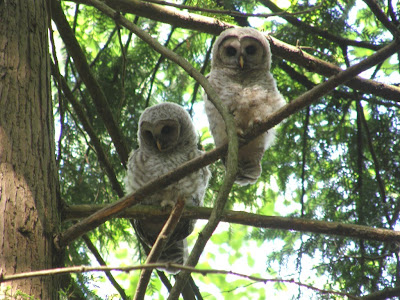 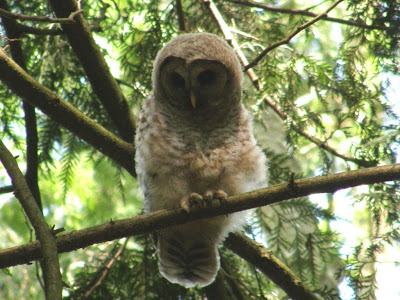 This one was a bit more active; the greyer one stayed huddled by the trunk. But they were both very interested in us; at first, this one bounced back and forth, as if trying to get a clearer view. Finally, it just settled down to watch.

According to the Owl Foundation, the young owls begin to leave the nest around 4 weeks of age, first one, then a few days later, the next. I would imagine, by this, that the one close to the trunk is probably a bit younger, and a bit timid yet.

The neck markings (cross-wise stripes) are clearly visible, and the breast stripes (vertical stripes) are just beginning to show. The head will be the last to develop adult feathers; now it almost looks as if it were wrapped in a soft baby blanket.

The adult was no longer calling. The little wood was quiet, except for the subdued clicking of our cameras.

10 minutes went by, a quarter-hour, maybe, while we tried to focus the cameras through the branches. Then, suddenly, both owlets lost interest: something was happening off to one side. 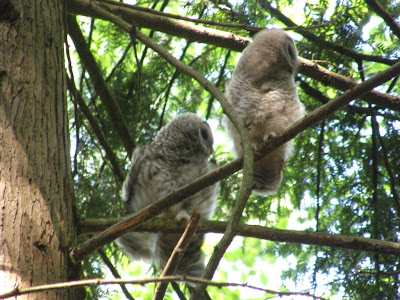 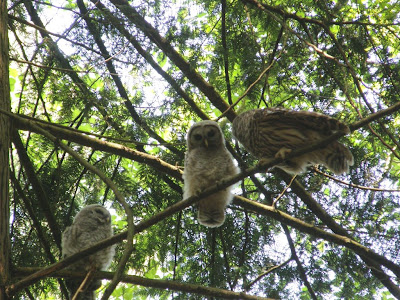 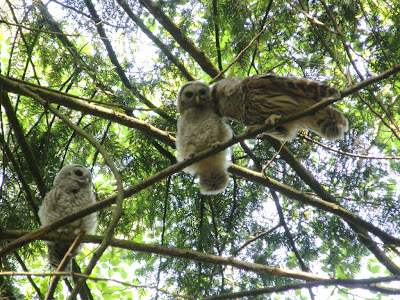 I thought maybe she had come to feed them, but I was mistaken. She nuzzled little Brownie's ear.

These owlets didn't scream for food, nor even open their beaks, the way other young birds do; they sat still and silent on their branch the whole time. 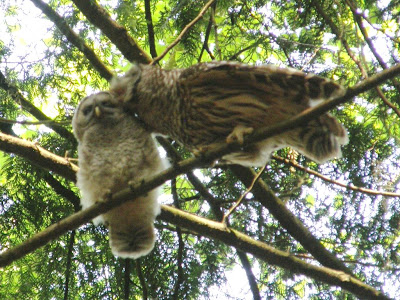 The nuzzling was vigorous. I had to laugh; Brownie has the same pained look that a little boy gets when his parents wash his face.

After she left, Brownie did a little exultant dance for us, flapping wings, turning on the branch and fluffing up his feathers. He still made no sound. 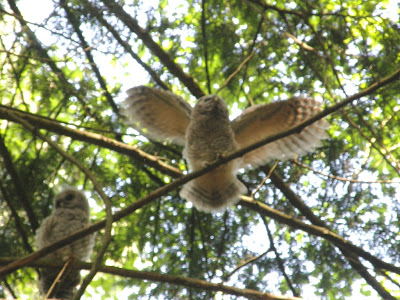 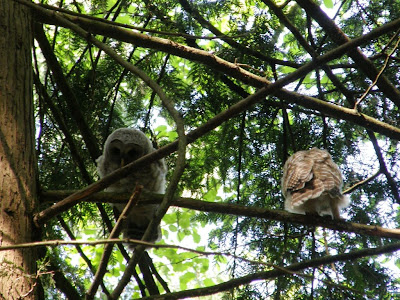 And now, we found the mother's perch, high on a tree behind us. 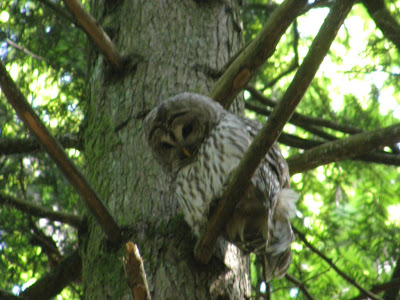 She watched us until we left.
.
Posted by Susannah Anderson at 1:15 am