On Spiders and their diet restrictions

I've been reading the book Laurie found me in MacLeod's Books, "Spiders", by W. S. Bristowe. 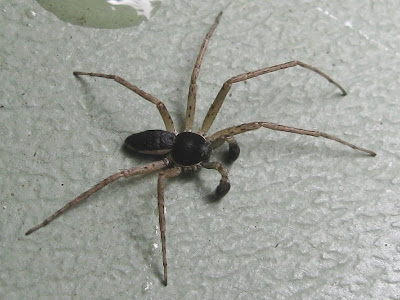 Unidentified spider found this morning. He's been in a fight and lost 2 legs. One was still on the table.
Bristowe has a chatty, non-technical style, easy to read, but often surprising. I'm in the middle of reading his discussion of the complex relationships between the insect-eating spiders and their not-so-hapless prey.

What happens when a spider tastes an insect with a disagreeable flavour? Often the chemo-tactic ('taste' by touch) sense leads to rejection without biting, but where a spider has bitten an insect with an unpleasant flavour it staggers clumsily to the edge of its web and is 'sick'. Fluid oozes from its mouth and this is rubbed away vigorously against a twig or leaf.

... if the aphid gets caught in a spider's web, fluid oozes from the cornicles without any caressing. The spider which gets this fluid on its mouth, or even the tips of its legs, shows immediate signs of discomfort. Often it is 'sick'. In consequence, few spiders will eat an aphid.

I'll have to watch for that!

Next we come to the hard chitinous armour possessed by some beetles, bugs and mites. ... many an impulsive spider, including most of the hunters, will retire after one clash of fang against chitin, ... The strongest armour is found on beetles and beetle-mites (Oribatidae) which have no unpleasant flavour to save them. Like the distasteful moths they lie still when attacked, but they draw in their legs tightly against their bodies so as to be out of harm's way.

Which brings me to a couple of photos I took today. I found a new carpet beetle, just coming in my door. Not a behaviour I encourage; he's in a plastic bag now. I wasted some time trying to get a good photo of his face, without much luck, but I have a couple that illustrate Bristowe's point. 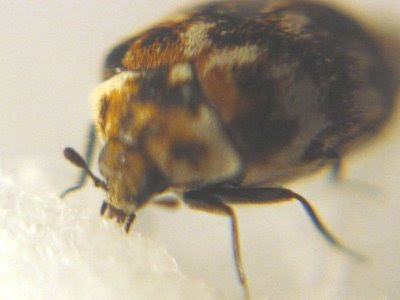 Here's the carpet beetle. Blurry, but you can see the mouth parts. I wanted the eyes, too.

When he's really upset, he plays dead. And look what he does with all his varied appendages: 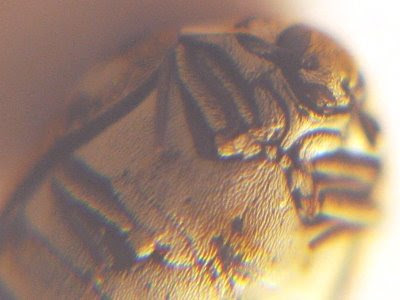 That's his underside. Legs folded and tucked into slots, chin down, mouth parts rolled into a ball; even the knobbed antennae are flattened against the body. There's nothing there for a spider to grab or sink a fang into.

Funny what you discover about one creature, by reading about another!

One more photo, this one a bit more artistic. Another of Hollick's 19th-century drawings from the book. 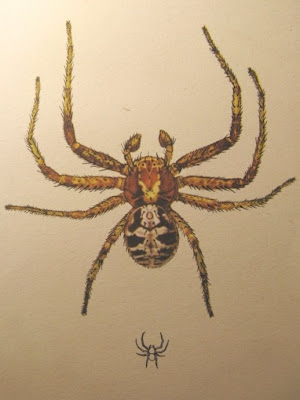 Xysticus lanio C.L.K. Male.
.
Posted by Susannah Anderson at 1:21 am